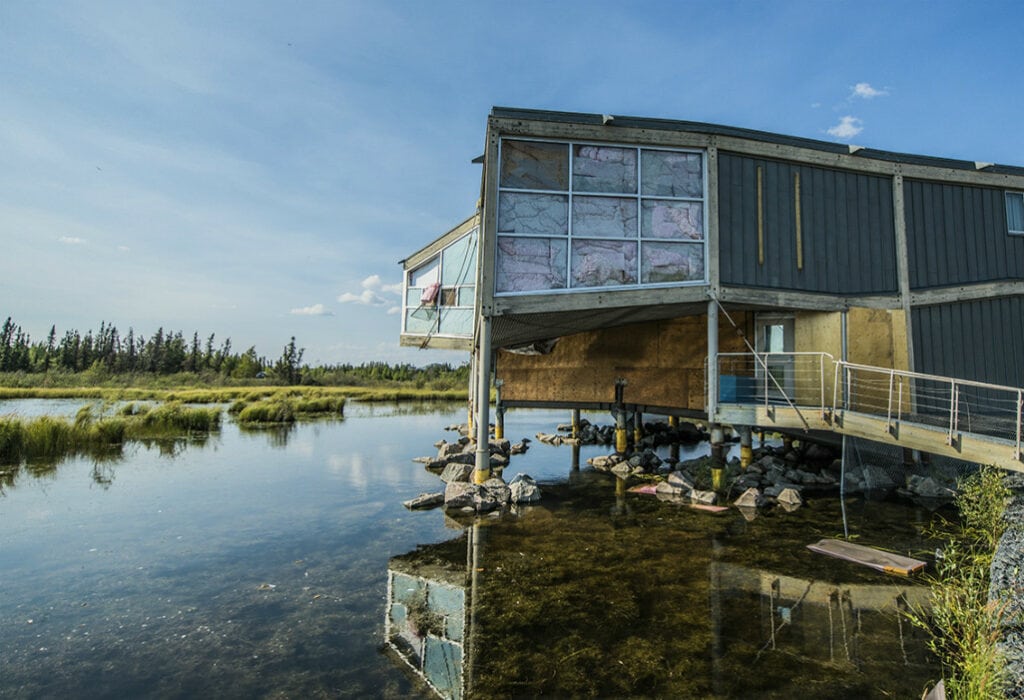 Above: the remains of the visitors' centre

In mining-camp-turned-territorial-capital Yellowknife, it’s easy to blame some level of government for just about everything. As such, it’s unsurprising the recent meltdown of the Northern Frontier Visitors Association has seen everyone from politicians to editorial writers blaming the GNWT for not prioritizing tourism and providing adequate support.

But as a former NFVA board member, I can tell you its collapse is a blessing in disguise. In just under two years of monthly meetings, I witnessed not only gross incompetence but a complete disregard for any solution to the building’s foundational issues other than passively waiting for a totally unnecessary government bailout. This was paired with a blindered, close-ranked culture that refused to even consider any new ideas or solutions to the building’s foundation problem, which the organization faced long before I took my seat on the board in May, 2015.

The board actively ignored and intimidated anyone who dared question the direction the organization was headed. To clarify: that direction was to completely ignore any potential solution that did not involve blaming government and waiting for millions in public funds to bail the NFVA out.

If you’re just tuning in: after years of not really dealing with a crumbling building foundation they were well aware of, in May the NFVA had to abruptly abandon its edge-of-downtown standalone location to a temporary home at the Prince of Wales Northern Heritage Centre. More recently, the organization’s president resigned and now the 34-year-old association, according to a late-July statement to members, appears as though it may dissolve.

I want to be clear: I’m not rejoicing in the NFVA’s troubles. I think the Visitor Centre’s staff are good at their jobs (making tourists feel welcome and providing them with the necessary info for a successful trip), and have worked very hard over the years to deliver an important service. People losing their jobs is never a good thing, but in this case it is an unfortunate byproduct of poor decision-making and planning.

I’m often as critical as anyone of the territorial government’s actions, or lack thereof, on many issues. And though I care about my community, I try to avoid wading into public discussion of current affairs. But the NFVA-as-victim narrative and knee-jerk government blaming spread by local media on this story has spurred me to speak up.

I can say with absolute certainty that no level of government is at fault here. From what I’ve seen, the GNWT and City care very much about tourism and visitor services, but aren’t willing to spend millions to pay for a new, unnecessary structure for the NFVA. In fact, the two non-voting NFVA board members from Industry, Tourism and Investment and the City were far more engaged and effective than just about anyone else in the organization, myself included, regularly offering up ideas, funding opportunities and other relevant information.

The problem is that the board never acted on any of these ideas and, in my opinion, actively ignored and intimidated anyone who dared question the direction the organization was headed. To clarify: that direction was to completely ignore any potential solution that did not involve blaming government and waiting for millions in public funds to bail the NFVA out. I’m a supporter of the North and a healthy, growing tourism industry, but I can’t condone the attitude that more government money is the answer to every problem, so I offered a few suggestions. Look into financing through a bank or other organization, just in case we ended up needing money quickly due to the crumbling building? Not a chance. Move to another location? No way. Put aside profits from goods sold to help pay for building repair or restoration? Apparently, we didn’t have the money to consider this, though we were able to give the executive director a $15,000 raise around the same time.

The monthly board meetings took place from noon to one, so a lunch of homemade lasagna, sandwiches and salad, or some sort of casserole was usually provided. At one point during my two-year tenure, the board instructed the ED to review the Association’s spending to determine if there was anywhere we could trim fat and sock away some money. When we arrived for our next meeting we were told the lunch program had been scrapped (as a cost-cutting measure), but were then informed there was not another single dollar that could be cut or saved — beyond the $40 or so per month spent on the meal for the board. Hungry and bewildered, I grabbed a sub on the way back to the office. Lunch was served at all subsequent meetings.

The Centre’s crumbling foundation has been fingered as the root of the organization’s problems. And here again, government offered significant support. Along with providing the organization with the building in the first place, various departments delivered $400,000 in 2013 along with numerous other grants over the past few years to conduct studies and analysis of potential solutions. And though I’m not sure of the total value, I’d estimate at least $50,000 in additional government funding to maintain the building was squandered through the bizarre practice of prepaying for goods and services that were never delivered, or not delivered satisfactorily.

We’d then spend most of every monthly board meeting discussing the same petty disputes with various suppliers, as well as grievances with everyone from the past president to a food truck vendor on the building site, to the City and whether it was providing enough funding to pay for pins we handed out to visitors.

But the organization’s problems actually run much deeper than a faulty building foundation and toxic culture. It has a profoundly confused purpose and mandate. The name sounds clear enough, right? Northern Frontier Visitors Association; presumably an organization that serves tourists and visitors. But it’s comprised of tour operators and other industry stakeholders and is supposed to help them, too. And most of its money actually comes from sales of local art and other products, a situation well-documented by the recent petition filed by local retailers who don’t receive government funding to run their operations.

So why didn’t I do anything about all of this dysfunction? I took my responsibility as a board member seriously, and that’s a question I’ve often asked myself. The answer is I did, but not enough to say that I wasn’t in some way complicit in enabling this incompetence and the related inaction and infighting that has led to the current situation. At times, I brought ideas and suggestions but then allowed myself to be shut down by the executive director and other board members not interested in any solution but more government funds.

In hindsight, given the cost of everything from staff to rent in the Yellowknife market, the organization’s roughly $200,000 in yearly core government funding would never have allowed it to accomplish much. This is probably why it started selling local arts and other merchandise. That said, $200,000 is enough for a staff member or two, maybe some summer students and a small storefront location somewhere tourists would be likely to go anyway, such as Old Town or the middle of the downtown ghost town.

Since the organization hastily moved out in May, it’s been operating with a skeleton staff out of the Prince of Wales Northern Heritage Centre. Strangely enough, seeing this in action made me wonder whether this type of presence, paired with some excellent online content that visitors can access before and during their visit, is enough. Though it brought in a lot of money, selling local arts and merchandise hardly seems like something a non-profit needs to do, especially since Yellowknife is already served by an abundance of retailers, given the city’s size. Retail’s a hard business to be in even without indirect government competition.

The good news is that the City is undertaking a significant destination marketing program, part of which involves delivering excellent visitor services, with a contract for a passionate tourism-focused entrepreneur. There’s also a possibility that these sorts of visitor services would be best delivered in-house by the government. I’ve worked alongside a similar system as a contract outfitter and guide in Ontario’s Algonquin Park and can say it’s a solution that absolutely works there.

So instead of shedding tears over the NFVA’s demise, let’s dream big about what will rise in its place. From economy to cuisine to culture, Yellowknife is changing and its various organizations need to change with it. In a sense, this is a rare opportunity to redesign these services from the ground up and make sure they exceed everyone’s expectations and needs.

Jeremy Bird is managing partner of Verge Communications, which publishes EDGE YK. He was a Northern Frontier Visitors Association board member from May, 2015 to April, 2017. 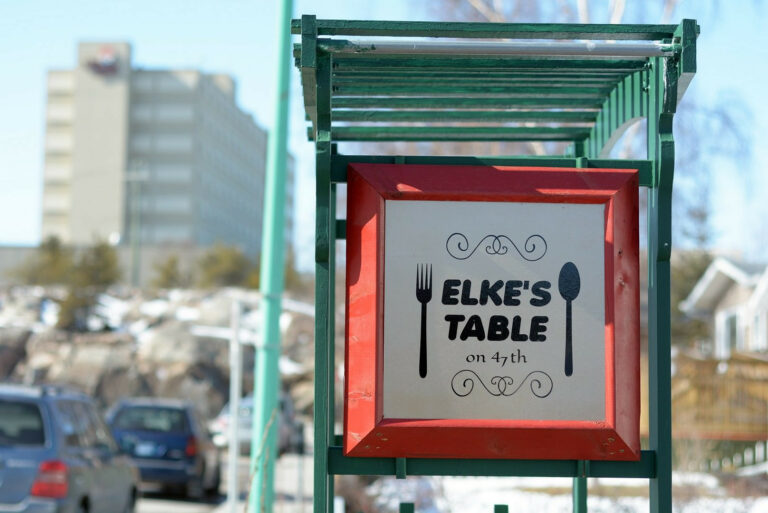