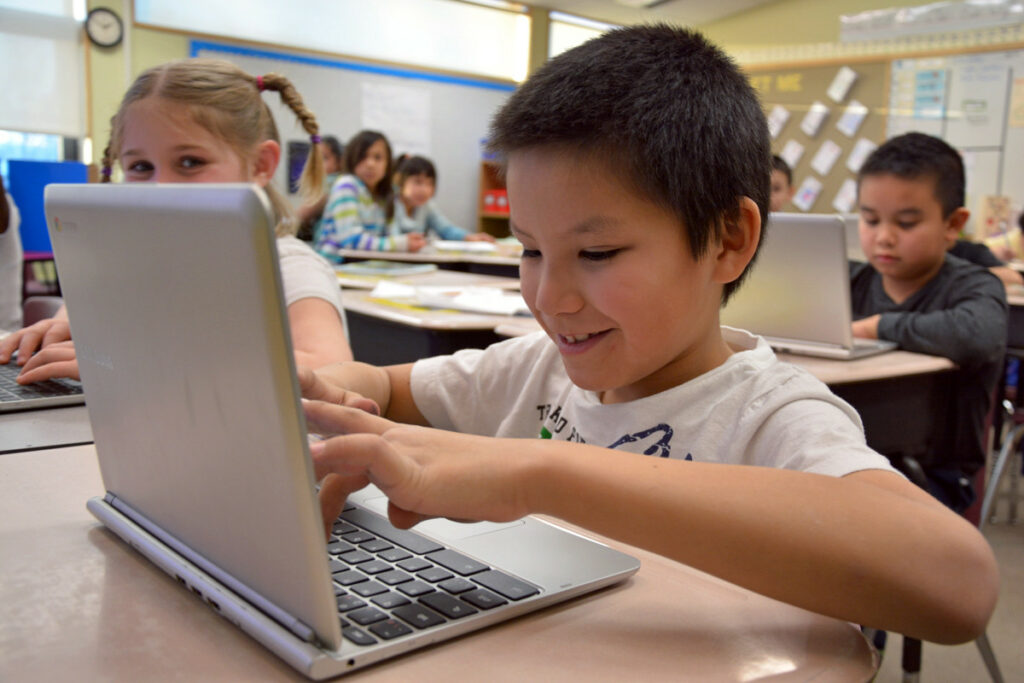 When I was in kindergarten, a ruler and pack of crayons was about as technologically advanced as things got in the classroom. There were the thrilling trips to the computer lab to play Number Munchers or trek along a pixelated Oregon Trail on boxy Macintoshes with floppy disk drives. But that was a rarefied treat.

Fast forward to 2014 and kindergarten students at Weledeh Catholic School are typing away on Chromebooks and logging into their own gmail accounts. Grade 1 students are racing around Yellowknife in Google Street View and Grade 5 students are tracking cargo planes with online flight tracking software.

Weledeh has taken a deep dive into technology-aided learning over the past several years. The school got a huge boost earlier this year when principal Simone Gessler was named one of Canada’s top 40 principals by an Non-Governmental Organization called The Learning Partnership and Samsung donated 63 new Chromebooks to the school, which arrived in September.

The laptops live in wheeled cabinets that roll into classrooms to be distributed to the students for an hour or two at a time.

“We only had one lab before and we have 17 homerooms, so there was never enough time in the lab to really implement and use technology as an instructional tool,” said Gessler.

For the younger grades, it’s mostly about exposing them to technology: “how do you log in, how do you change the fonts, how do you use the internet to look up things like bears?”

In higher grades, students are given more reign to use the laptops for research or group projects. They’re learning how to use programs like Google Docs, said Gessler, which allows groups to work in shared documents and edit each other’s work in real time.

You may think giving a bunch of laptops to Grade 6 students might mean more YouTube videos of cats and less biology, but Gessler said this hasn’t been a problem. “The teachers are finding the kids are really engaged in what they’re doing, so there’s less of that off-task stuff. They really want to find out that information to get to their project,” she said.

A shift in learning

“The direct instruction of the old days, where the teacher stood at the front and gave all the information has changed. Teachers now start with a question and the kids do the research with the teacher’s support,” she said. “We need them to start being self-sufficient and self-reliant, so if they’re in a situation where somebody is not giving them the answers, they’re able to come up with the answers on their own.”

Neither laptops nor iPads are necessary for this shift – there are always good old-fashioned libraries for research. But putting powerful research tools into the student’s hands makes independent learning much easier. And beyond that, kids are just more engaged when they’re playing with neat technology.

“It engages them, and it opens up the whole world to them instead of just what’s right in front of them,” said Gessler.

There is some concern that exposing young children to technology can be bad for brain development. Shouldn’t six-year-olds be playing with blocks rather than scrolling through web pages? The scientific jury is still out on that one, but Gessler said she’s aware of the concern.

“Everything needs to be in moderation. If we sat our kids in front of a computer or iPad all day long, and that was the only way we taught, I’d have concern. But if we’re using it as a teaching tool for 40, 50 minutes a day, it’s not a huge problem.”