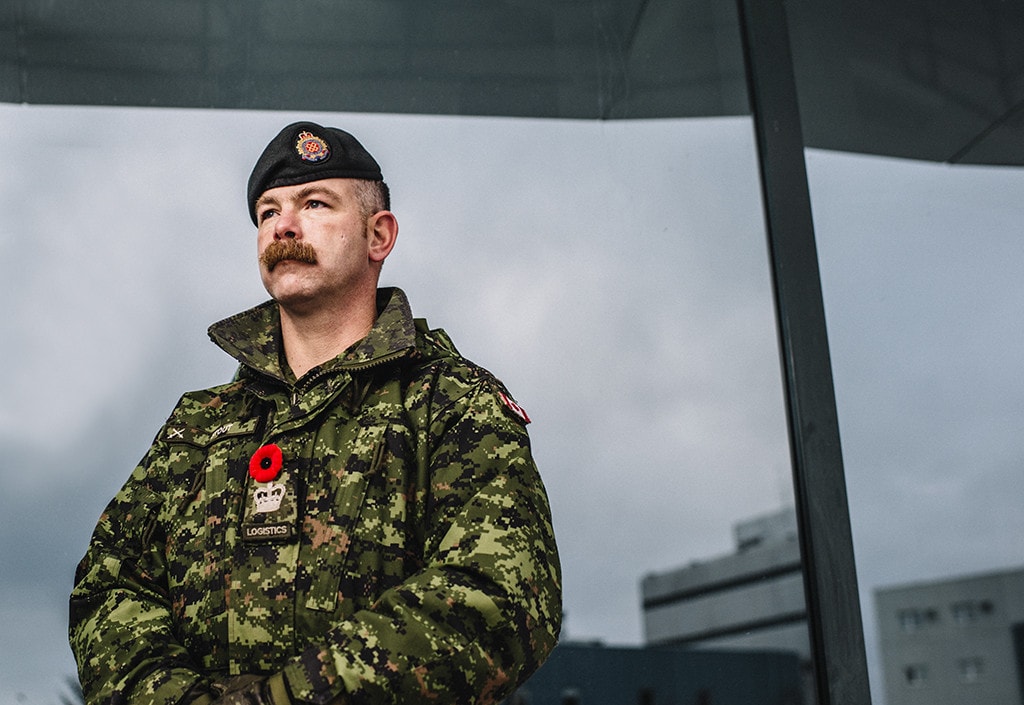 A few days after Remembrance Day 1999, Warrant Officer Ryan Stout made his first parachute jump, from 1,250 feet above a farmer’s field in Prince Edward County, Ont.

“We refer to it as a stop drop. So, I was hoping that our jump would get cancelled,” Stout laughs.

“I will not lie. Every day, I wouldn’t mind if we were stopped for some reason. But we get up to a certain point in our drills and your mind just reverts back to the training. Training takes over and you just feel confident with the equipment.”

That confidence is important, Stout says, especially when you’re the parachute rigger.

As a supply technician, Stout spent 15 years as a parachute rigger specialist, and, he says, you have to be able to test your product.

Stout moved to Yellowknife in September of 2014 with his wife, and has 23 years of service in the Canadian Forces. He’s the most recent in his family’s line of soldiers.

“I was 17 years old when I joined. Days after my father deployed to Israel, I asked my mother for her consent because I was under the age of 18,” Stout says. “I joined March, 1992.”

Growing up in a military family was a major factor in his own interest in serving.

“My mother was proud, but ironically my father didn’t want me to feel I had to join,” he says. “So I waited until he was literally out of the country.”

From there, it wasn’t the initial training that pushed him; it was the thought that his father might hear about his performance, or lack thereof. “I always had it in the back of my mind that dad was watching me,” Stout laughs. “He still is watching me, but more on the sidelines so he doesn’t have as much impact.”

Though they never worked directly together, there was some overlap between father and son. “I have had to go up and stand in my father’s office for certain job requirements and normal day-to-day work, including commuting with him for a year and a half,” Stout says. “Which was an interesting year and a half.”

Though his location has frequently changed over the years, Stout says he’s in nearly the same role he was 23 years ago, only now he’s in charge of people.

“We provide service and support for procurement of clothing, equipment vehicles, et cetera,” Stout says. “I like being a contributing factor, where I know the person has the equipment I’ve given them, be it by delivery methods or just by customer support.”

But despite how it might sound, this isn’t necessarily a desk job.

“I have deployed, twice to Afghanistan and once to Africa in support of Canada’s war on terror,” he says. “I was still employed as a supply tech, in charge of delivery methods, supplying equipment and supplies to the troops.”

His first deployment was in 2007, at the age of 33. His training was under the Canadian Special Operation Force Command, created in 2006 by former Chief of Defence Staff General Rick Hillier; he can’t discuss any specifics of the project.

As well as playing his part in local Remembrance Day ceremonies, Stout says he always remembers to call his grandfather, a Korean War vet with many years of experience, who just happens to be born on Nov. 11.

“I make sure I try and wish him a happy birthday, see if he’s participating in Remembrance Day,” he says.

“The last few years, he’s a bit older now. He hasn’t been able to get out and do so but I make sure to let me grandmother and grandfather know I’m thinking about them and my family – voice my appreciation for their years of service before me.”

This Wednesday in Yellowknife, Stout will be among the ranks of Team North, marching from the cenotaph to St. Patrick High School on Remembrance Day. Like many of his colleagues, he’s lost friends killed while serving their country. “However, I always remember their better life – that they enjoyed certain things, they very rarely lived with regret,” Stout says.

Cold and crisp in January of 2009, when I came up for a course. It was a total of two and a half months for what’s now called the Advanced Winter Warfare Course. Since then, if the opportunity presented itself to move to Yellowknife, I said I would be up for the challenge. I enjoyed it. I learned that the Wildcat Café, the owner was my grandfather’s second cousin – Smokey Stout – who also served in the Second World War.

I love the sense that it’s a small community by population but it still has all of your city affects: great restaurants, great parks, numerous lakes.

The amount of litter that gets accumulated on our streets. It’s a beautiful city, we should keep it clean.

Dress in numerous layers. Trips to the sporting stores and the outlet stores here and just bundle up and enjoy the winter.

I love the amount of daylight and our lakes. I’ve started stand-up paddle boarding and love that there are lakes everywhere. You can go out and it’s either a little choppy from a motorboat passing or just pure glass.

What sort of opportunities have you found here that you wouldn’t necessarily find somewhere else?

Being a smaller community, my wife and I reside within government housing, so we’re within walking distance to everything. Whereas a lot of our bases are quite dispersed, we’re enjoying being right downtown all of the time.

Regrettably, no. I have 19 years left of hopefully serving my country and then my wife has a retirement home back in Pembroke, Ont.