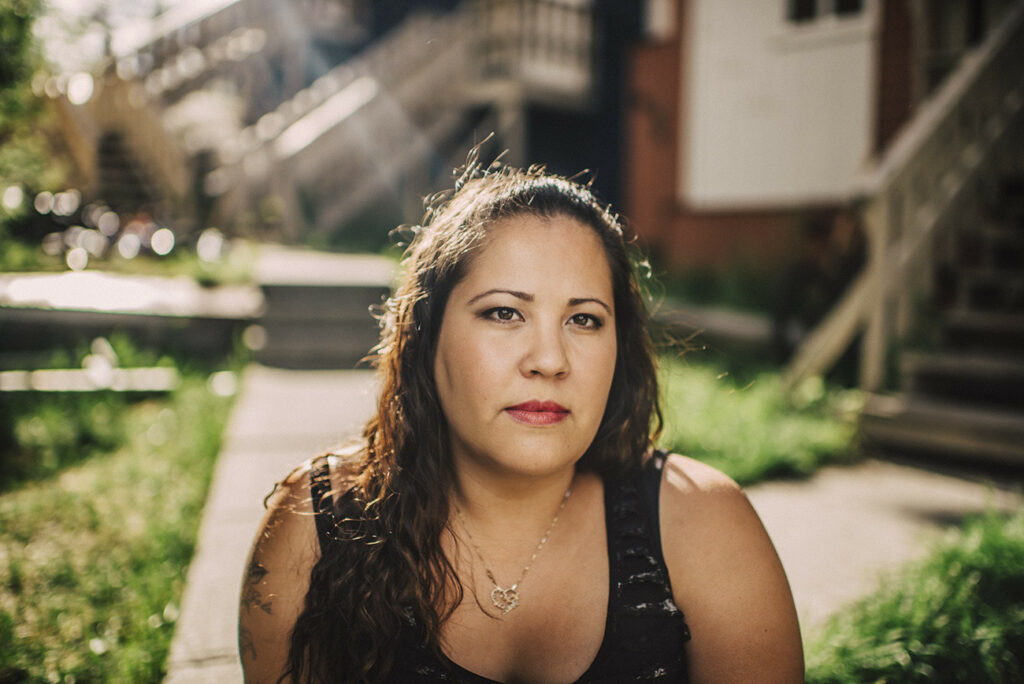 On Thursday afternoon, a group of about 15 young moms gather around a large messy table in the Ndilo community centre, some working on finely beaded baby bags and moccasins, others bouncing chubby infants on their laps or cradling tiny babies barely a week old.

“Some of the moms have never lifted up a needle in their lives and now they’re sewing really well, so that’s exciting to see,” says Melissa Sangris, who runs the weekly Mama and Babia program. It’s somewhere where young moms and moms-to-be can socialize, learn about healthy pregnancies, get nutritious food and work on traditional arts and crafts, Melissa explains after reminding a heavily pregnant woman to add kale to her smoothie.

As the Yellowknives Dene Community Wellness Coordinator, Melissa supports moms from Ndilo and Dettah through their pregnancies, organizes summer camps for kids and runs monthly Elders lunches in Ndilo and Dettah. If you’ve seen the sizable greenhouse being built in the centre of Ndilo (and named in honour of the late local activist Doug Richie), that’s one of the projects Melissa’s involved with as well. She’s a big believer in locally grown food and one of the masterminds behind the Ndilo community garden that went in last year, and another that’s opening in Dettah this summer.

“I grew up in Hill Top, subsidized housing located downtown, but my mother always had a garden, so the concept of gardening for me was a reality. That was part of my vision for the communities: I want the children to grow up seeing that there’s a garden then hopefully one day everybody will have a garden and be self-sufficient.”

Melissa moved back to Yellowknife just last spring, after living in Edmonton on and off for 12 years. She’d left Yellowknife at age 19 to try her hand at city living, working various office jobs “to get out of the house,” and raising her two daughters. There had been a decent-size Dene community in Edmonton that would get together for things like Thanksgiving dinner, and her mom and sister were living there when she had her first daughter. But life in Edmonton was lonely at times, and eventually she tired of the bustle and noise.

“Your life goes by so much faster there. You’re always driving and there’s a lot of traffic. Here, after work I can easily just go fishing, whereas there, you can’t do that type of stuff.”

She and her family tried moving back to Yellowknife a few years ago, before returning to Edmonton. But this time she says she’s here to stay.

“Now that I‘m older, it’s a good place to raise your kids, it’s slower paced, everybody seems to be friendly and outgoing.”

It’s actually a funny story! I ran away to KFC when I was a little girl, three years old, and I remember sitting on the floor. I was playing outside and I’d gotten out of the gate; my mom was busy cleaning, my dad was hanging out with his buddy. Then my mom realized I was gone. At that time I was living uptown, and they looked for me everywhere. They started looking where St. Pat’s school now is, that used to be just trees and rocks. I ended up not showing up for an hour, and my dad’s best friend – he’s passed away, his name was Fat Gordy – he got tired and said, ‘I’m hungry I’m going to go down to KFC.’ He found me there eating leftover chicken scraps somebody gave me and I had a balloon. I was happy. I had a little balloon! And at that time Yellowknife was a lot smaller and safer, nobody thought to call the police and report this little girl. I just wanted some chicken, I guess.

I love the community feeling. Everyone is like family, and if they’re not family they’re friends, but we all treat each other like family through hard times and good times. You miss that when you’re in the city. There are a lot of group events and you can see how close we are: if a tragedy happens we all get together and we support that family, we clean the house for them, we buy them groceries, we’re really there for each other. It’s especially like this in Ndilo, but in Yellowknife too. I moved just this past weekend and I had ten to twelve people help me pack and move and clean up, just friends showing up. Maybe even more than that, up to 15 people. Now I’m done and unpacked by Monday, and I moved on Friday!

I really don’t like how there’s not a treatment centre in Yellowknife. I’ve seen, from the time I was little to now, the homeless population increase a lot, and I think a lot of that has to do with alcohol use. It really bothers me there’s not a treatment centre in the North. We’re having to send people down south and that’s going to stop people from going, because it’s a culture shock, people haven’t even been on a plane in their life. So if I could change anything that’s what I would change. It really bothers me seeing people suffer. I hope they can get the help that they need, and it should be right in our backyard, not down south.

Mainly it’s just working and being a mom, so I’ll take my daughter to her gymnastics and her swimming lessons. My husband works out of town, he’s a superintendent at Dominion Diamond Mine, so he’s gone Monday to Thursday. So it’s basically just doing the mom stuff: going to work, picking them up after school, going home, cooking dinner, maybe watching a bit of T.V. and reading. It’s pretty quiet, nothing really exciting. I didn’t go out snowmobiling or anything this year. I was trying to adjust back to the North, and it’s really cold.

Work, go out camping, go out to the cabin, that’s about it. We have a cabin on the highway to Rae. There’s no cell phones, there’s nobody popping by, we have to bring in our own water; it’s really going back to the way my grandparents lived. It’s really relaxing and calming. For this month it will be getting the gardens up and going and after that the people that do the gardens can take care of it themselves, that’s the purpose of a community garden. I think I’m going to do half a plot and my uncle is going to have the other half. I think I’m just going to do potatoes, carrots, cauliflower and peas, and do some herbs. And we were planning on buying a boat this summer, so we’ll see how that goes. It’s kind of a big purchase, but I think you need a boat to live in Yellowknife, almost, or have someone in the family who owns a boat.

Just being involved in the community and having more time for my family rather than commuting after work. And there’s the opportunity to feel safe: it’s just safer here. And then it seems there’s more nature here. You’re more relaxed, you can listen to the birds, you can listen to kids playing outside rather than the constant buzz of city life. I don’t feel as lonely as I did down there, I feel I have a lot of friends and family, there’s a lot of support that to me is major. Someone will always come by and visit, or someone will call, ‘Let’s go out for coffee, let’s do something.’ Also for my children, especially for my youngest daughter, it was hard for her to make friends in Edmonton because you have to build a relationship with parents and they want to make sure you’re okay. Whereas here, I already have established friends and family, so my daughter always has someone to play with and she’s not as lonely as well.

For sure. I’m here to stay. I think I’ve always known I’d end up coming back. I just had to go and test the waters and try new and different things. I just think that Yellowknife, Ndilo and Dettah, they’re all my homes and I’m happy right now with my life and where it’s at. I wouldn’t change anything. And if I do get sick of it I’ll just go on a little vacation.