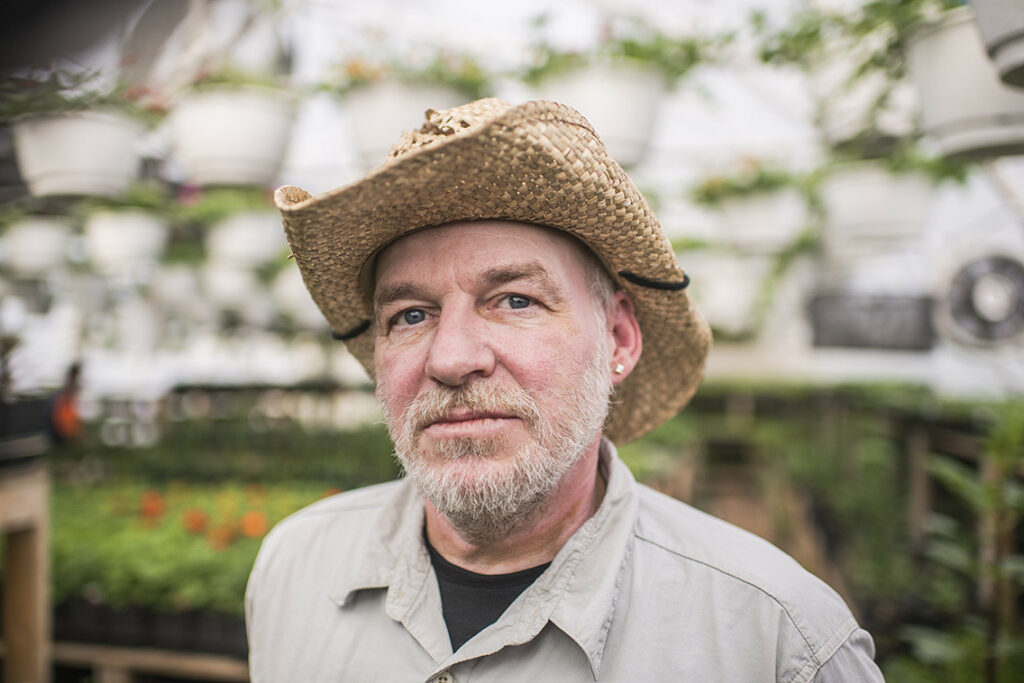 In the early ’90s, Darwin Rudkevitch and his childhood friend Tom Vornbrock were engaged in an epic battle over who had the nicest lawn on Trail’s End. Properly manicured lawns were a rare thing in Yellowknife at the time, and soon Darwin’s buddies started taking notice of his botanical talents and asking him to snazzy up their yards.

At the time, he was working four days on/four days off as a firefighter.

“Gardening was just something to do on the four days off, then people started to want to pay me. I went to Canarctic, and I had a business name that I wanted Tom to print on business cards. He’s doing up the docket for the business cards and he starts laughing, and says ‘you should call yourself the Arctic Farmer.’”

And so was born the name Darwin has gone by ever since. He spent a decade running the gardening and landscaping business from his Trail’s End home, but after interminable complaints from his neighbour — “Old Man Henderson” — and visits from bylaw three or four times a week, Darwin moved his operation to Kam Lake, where he now has a greenhouse, a barn, a miniature farm of goats, donkeys and chickens, and a mechanics shop.

The 53-year-old businessman has been a Yellowknifer most of his life. Although he was born in Winnipeg, his family moved to Whitehorse almost immediately after his arrival and then to Yellowknife when he was six or seven. His large family — five brothers and a sister — lived at first in Northlands, where Darwin cut his teeth on growing things in his dad’s large garden and greenhouse.

“I remember my brothers saying ‘you never planted anything, you were always reading the damn packages.’ And it’s funny, I remember they would put a row in, throw the seeds in, cover it up and they were done. And I always thought, ‘I don’t know if that’s the right way, and if we do it wrong we’re going to get in trouble.’ So I always read the package and then argued with my brothers.”

When Darwin was 17, his parents moved to Saskatchewan. He decided, after a month down south, to move back to Yellowknife. He spent the next several years trying to make ends meet, working evenings at the liquor store and as a night auditor at The Explorer Hotel. Because of his nocturnal work schedule, he had to drop out of school in grade 11.

This lack of formal schooling, however, didn’t stop Darwin from becoming one of Kam Lake’s more successful businessmen. He now employs up to 40 people in the summer, doing landscaping, gardening and property maintenance, and runs a tire shop in the winter. He spends most of the time in the office these days, while his wife runs the greenhouse side of the business. But he still gets a kick out of beautifying the cold, rugged place that is Yellowknife.

“I think the thing that amazes me, even today, you plant that little seed, and then it grows into this incredible plant, in one of the most inhospitable places in the world.”

When we were on 45th street, we’d be walking to school and we’d have the guys coming out of Old Town, and everyday it was a fight to get to school and a fight to get home. It was a war with the guys in the Old Town, and it was war with the guys in the New Town, and unfortunately we’d all have to intersect at the hill behind Lahm Ridge Tower. I don’t think there was fisticuffs, but it was pushing and shoving. It was like that for a few years, but as we got older, we all amalgamated together. Because we were right at the top of the hill we ended up befriending the Rochers and the Magrums, all them from the Old Town.

When we were 12 years old, you could buy a little Yamaha 80, go the RCMP station and get your license. All our friends had bike licenses and these little Yamaha 80s and Honda 50s. So here’s this gang of 10 to 12 12-year-olds, running around Yellowknife, everybody getting into trouble. Man we’d go to Prelude, all over the place. We’d bike out at the mine, park the bikes and go for a swim in the green water. We didn’t know! There was no security, no fencing, so we’d all go swim in the arsenic.

Yellowknife is different now; I mean I remember riding the motorcycle and having four guys on it at the same time, one guy on the seat, one guy standing on the bolts, a guy sitting on the handlebars, then a guy straddling him riding the front bolts, and off we’d go. The shit we did!

The people. There’s an amazing group of people. I walked through the mall the other day, I was in there 20 minutes and I must have seen 10 people I knew and stopped and chatted. I think growing up we were all very close, and as the time went on, us local guys have seen so many transients come through that we’re always open to new people, we never pass judgment, everybody is what they are.  We still have the original core group. People grow apart, but a lot of locals I grew up with are still in town, and we still see each other and it’s great.

Oh lord, least favourite thing? Man you know there’s a lot of stuff the City does, a lot of stuff the government does, it’s tough for me to pick one item out. Yellowknife as a whole has been extremely good to me and my family. I imagine there’s always something someone can complain about, but it’s tough for me to bash Yellowknife. I would say the way the downtown core has evolved now, it’s vacant from what it used to be. Why has that happened? Why has it evolved into that? I know the answer, but politically it’s the wrong place to go.

Come November 1, we need a break, so we usually leave for a month or so. We have a place in Arizona we bought four or five years ago. We come back at Christmas to run the store. After Christmas we usually take off again for a couple of weeks. We don’t do much, mostly sell tires.

We start in March, planting all the flowers in the greenhouse. And from about the middle of May until July 15, we’re basically run off our feet in the greenhouse. After that, it’s more on the landscaping, and we’ll go through with that until October 31. Last summer, we did all the bricks on Government Dock, we laid 415,000 pounds of bricks over five weeks. That wasn’t a lot of fun. I helped for a couple of weeks laying bricks and I blew my shoulder out. It’s been 10 months now and it still hasn’t healed completely. I think with a lifetime of hard labour it’s just worn out, then two weeks straight of putting in eight pound bricks, it just started to hurt.

This summer we’re going to plant a Haskap Berry patch out at our quarry. We’re going to plant 500 plants and we’re expecting to get three kg’s per plant, so three times 500: 1500 kg of berries. We’ll try to market it here in town at some of the restaurants, we may do the Farmers Market and we’re going to do a basket thing out of the greenhouse; we started a whole bunch of vegetables back in March, so they’ll be ready to produce first week of June to sell in town.

I think Yellowknife as a whole has amazing opportunities that wouldn’t be available in the south; we have a limited amount of people, so if someone wants to do something and they’re reasonably talented, they’re going to succeed at it. Prime example was a buddy of mine who was a chef, he cooked in Edmonton then he went to Toronto, then to Collingwood, Ontario. I says to him why don’t you come to Yellowknife? That had to be 30 years ago. I went down and drove him and his family all the way to Yellowknife in a moving van. He got a job at the Explorer as the head chef and he’s cooked for prime ministers, he’s cooked for the Queen a couple times, so I mean he’s got a certificate from Her Majesty that he’s certified as a Queen’s chef.

I think it’s easier up here; people are more receptive and accepting of somebody local trying to create a market. Who would have thought doing a greenhouse and landscaping in Yellowknife would be successful? And yet here we are 20 years later, growing everything.

Yes, for sure. We’ve talked about retiring and always say, ‘where are we going to go?’ We’re always going to come back here. 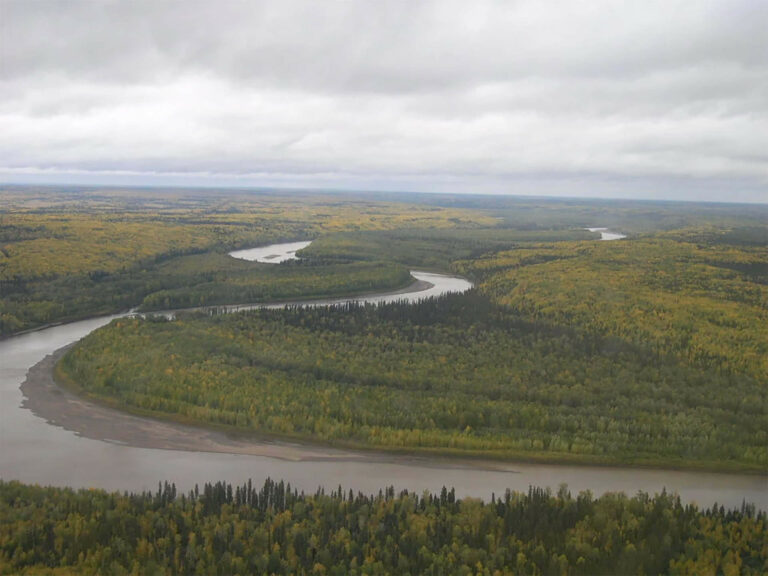