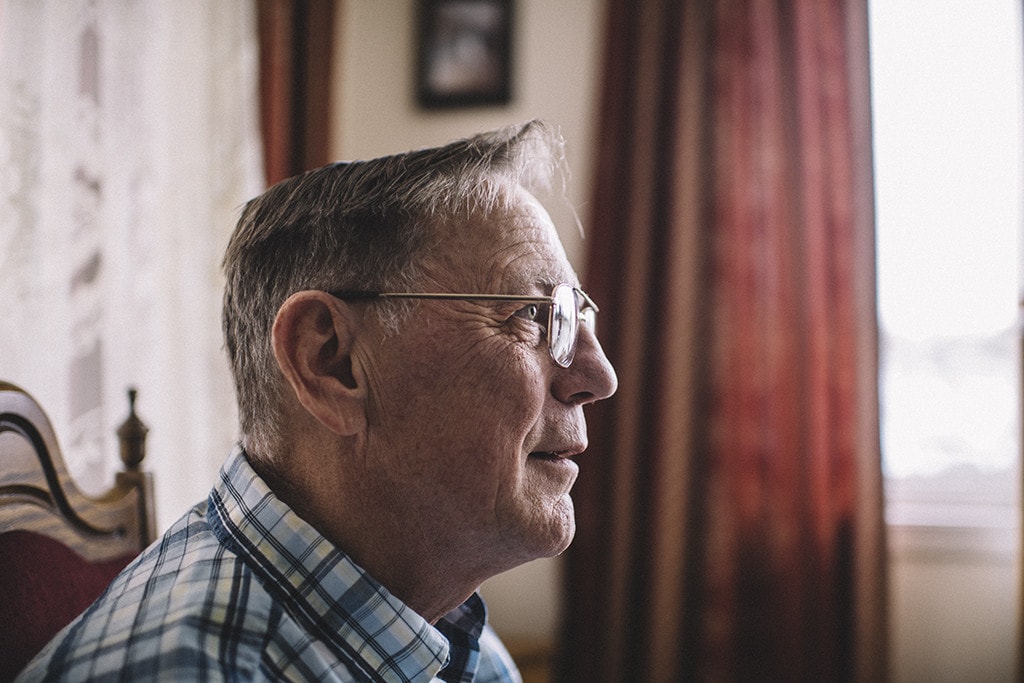 In 1994, Tom Holst was working as the breakfast cook at the Explorer Hotel when Queen Elizabeth II and Prince Philip visited Yellowknife. Hotel staff were given strict orders that only the head chef and sous chef were to cook for the royal couple. And no one else.

“At 7 a.m., the Queen’s valet came down to the kitchen and asked, ‘Can you help me?’” Holst recalls.

“He had this bag of rollers, those old metal ones, they were the Queen’s rollers. He said, ‘Can you heat these up?’ So, I put them in a big pot of boiling water. Now I tell people, ‘I cooked for the Queen.’”

That, Holst says, is his claim to fame.

The joy of cooking

These days, Holst is one of the friendly faces that greet shoppers entering Walmart. He retired just over two years ago from a lengthy career in kitchens that ranged from Yellowknife hotels to a private catering company to remote bush camps across the territory and even in Greenland.

Despite his lengthy culinary career, Holst, born and raised in Cookstown, Ont., was trained as a laboratory technician – which he was practicing when he stumbled into his first kitchen.

“I moved to Toronto. I was living in one room and eating my food at one little restaurant. It was really nice and I got to know the owners quite well,” Holst says.

“The wife ran the restaurant, her husband was in refrigeration repair – he was a short little Greek chap. Her help up and quit and I had two weeks holidays, it was use them or lose them. So, I helped work in the kitchen. After the first week or so, she said, ‘Hey look, you can have the apartment upstairs, work in the kitchen, work with me and we’ll make up your wage.”

He took the job.

After that restaurant closed, Holst found himself heading west for work.

“Then I saw an ad for the Yellowknife Inn, for a breakfast cook,” Holst says. Phoning up the owner, he secured the position and moved up for the summer of 1976. Just for the summer.

“Back then, if you proved yourself, you went far,” he says. And his proof soon came, with a job offer from a Vancouver-based company that hired out camp cooks across the North.

“Most camps were supplied by Weaver and Devore, so I got to know all of the boys down there,” Holst says. “On my time out, I’d hang around there, helping at the store. I had a shack down there where I stayed on the hill in Old Town, on Pilot’s Monument. It’s not there anymore.”

It’s not all sunny

In the ‘80s, Holst took a weeklong cooking position at a lodge outside Yellowknife where the Edmonton Oilers were spending some time off the ice.

“They’d come into the kitchen at 8 a.m. with a bottle of cognac,” he says. Nearly everyone one of them would stop in to pay him a visit. “’Here, have a sip,’ they’d pour me some.”

He kept a glass next to him in the kitchen, which he’d pour the portions into. By the time breakfast was finished, he says, he’d have a full glass.

But not everything was warm in Holst’s kitchens – a storm in Greenland completely buried his camp in snow once, while back in the NWT blizzards whited-out everything in their path.

“There were three tents on one side, three tents on the other side, an alley in between and the cook tent, and you couldn’t see more than three feet in front of you,” he says. “You had to tie a rope around a person to go to the bathroom.”

After getting married in 1982, Holst and his wife Giselle started a catering company called Top Host – she wasn’t so keen on him being out at camp all the time. Business was good and would have carried the couple well into retirement, Holst says, until Giselle was killed in a car accident in 1987.

He continued cooking in Yellowknife and around the territory.

Now almost 70, Holst took his job at Walmart after a brief retirement; he was ready to get back to work (and ready to lose the extra pounds he’d put on). He loves the job and interacting with people, but there have been some less than cheery times for the greeter.

“At Walmart, I’ve been attacked three times,” Holst says, though he doesn’t seem particularly shaken as he speaks of the incidents now.

The safety of the city, he says, is something he’s seen change over the years – not to mention the cost of living. His mailbox jumped from $3 per year when he first moved to town to $185 this year.

All that aside, Holst remains positive about Yellowknife and his job.

“I’ve always had a good disposition,” he says. “That’s helped me a lot in my career.”

When I first moved here – the first few years – it was the friendship and the atmosphere. Now, because I’m older, if I want peace and quiet, I can get peace and quiet. But I still make my regular round to visit people, down to Weaver’s.

The drunks and the safety of the town. You used to be able to go to the Gold Range and you could leave your drink and a $20 bill on the table and no one would touch it.

I like to go out and find some place to cook a hot dog or hamburger and a have a meal or just sit on my balcony.

I try to do my rounds but mostly I stay inside because it’s too cold. I lost nerves in my legs and it affects my balance. When it’s cold and icy it’s hard to get around.

What sort of opportunities have you found in Yellowknife that you wouldn’t find anywhere else?

Oh, definitely. I’m quite content to stay here and not go anywhere else.