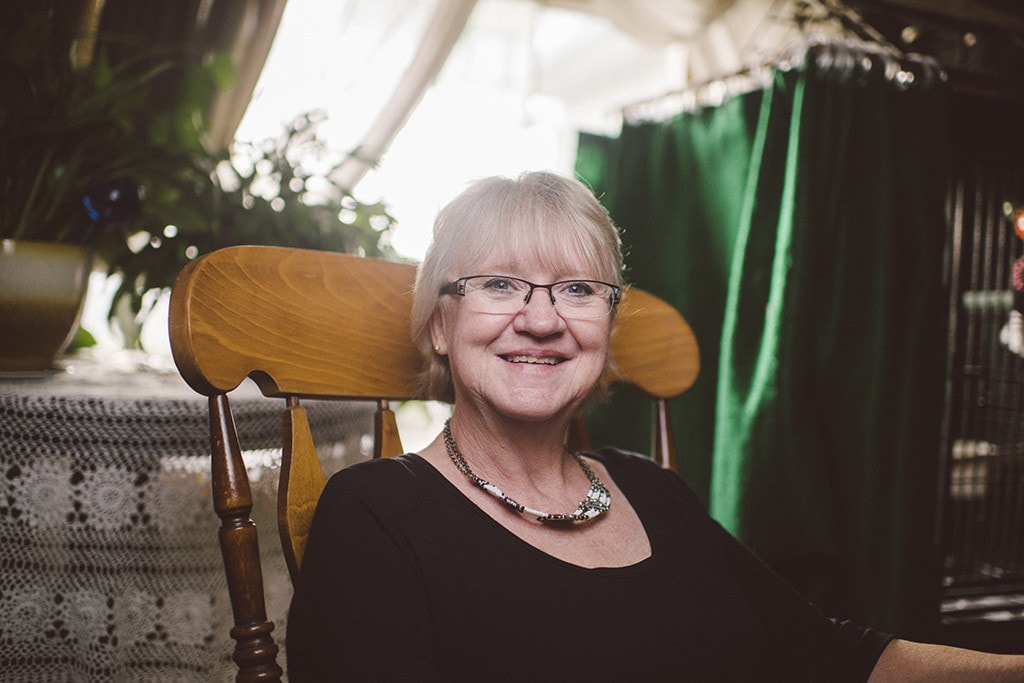 A few weeks ago, Faith Embleton received a phone call from a German man who, along with a friend, had stayed at her bed and breakfast on 52 Street and was returning.

She recounts: “He said, ‘Hi, this is Jorgan. I just wanted to tell you we won’t be there as planned. I want to cancel my reservation. We’re sitting on the shore of Chute Lake. If you never hear about us again, we’re probably dead. We’ve been here for nine days already. We can’t move because the winds are so big and the waves are so big. We’re just staying here until it settles down. If you never hear from me again, remember Chute Lake.’”

As it turns out, the pair did make it out alive – Embleton followed up to make sure – they actually made it back to Yellowknife and then home to Germany, but forgot to let her know.

“We’ve had people from everywhere in the world,” she says – a point illustrated by Congo, an African Grey Parrot that chirps his way through our interview from his cage in the living room, who also speaks Japanese. Although having different people coming in and out of the house is still strange for her husband Ken, it’s commonplace for her.

Embleton, born Faith Harvey, was raised in a busy household of eight children that grew after moving to Yellowknife. “My parents adopted five babies, all three or four months apart. They were all really young,” she says.

“At that time, my dad used to travel with social workers to communities and they used to apprehend a lot of babies because there was a lot of abuse going on. A lot of these kids were probably the product of residential schools and they didn’t know how to be parents. A lot of these babies were really neglected.”

From a young age, Embleton says she changed a lot of diapers – one baby came into the house at just five days old after his mother handed him over, unable to care for him herself.

“I used to carry my brother all over town, carry him around with me. The school actually phoned my house telling my mother how terrible it was that I was walking around Yellowknife flaunting my baby when I wasn’t even married,” Embleton says, laughing.

Like her parents, Embleton also fostered children even after having two of her own. When her children were around eight and nine years old, the Embletons decided to have one more of their own. Their third child, a daughter, was born with cystic fibrosis and died at age seven.

After another loss in the family, Embleton also became heavily involved in raising her sister’s two children. “My sister, her husband drowned in the Yellowknife River, Robert Oliver, and they never ever found him. My sister got married to him when she was 15 years old, he was 19, I think,” she says. “When he was 21, he drowned and she was 18 or 19 years old with two kids and they were the same age as my kids. She just spiraled out of control.”

Her sister passed away a few years ago after moving down south, but both children returned to Yellowknife after they were 18 years old.

Embleton moved to Yellowknife from Labrador City in the early 1960s – from her kitchen window, she points to the neighbouring houses, listing off former and current owners that have also been there for years. Prior to that, she spent her formative years moving around to different parts of Ontario where her father set up Pentecostal churches. Both of her parents were pastors.

“My dad decided he couldn’t continue to feed his family on a pastor’ wages because at that time you didn’t get wages, you just got donations from your congregation,” she says. “I spent a lot of hungry days when I was a kid…one time we ate potato soup for two weeks.”

Hence, the move to Labrador City where her father would work at the iron ore mine – Embleton’s was only the second family to move to the city at the time, she says.

From there, the family – aside from the three oldest who were working in Ontario –  headed north to Yellowknife.

“We drove across Canada with two cars, three dogs, budgies, kids, oh my gosh it was unbelievable and trailers behind the cars towing our things,” she says, getting up from the table to retrieve Congo from the living room. Cleo – named after Cleopatra, as Embleton says she’s the queen in the house among the two other male dogs – rubs her back continuously along the side of my foot. Corbin, Cleo’s father, sneezes on my hand and then takes the third seat at the table.

Having spent seven years caring for her daughter before she passed away,  Embleton’s experience led her to finish her high school diploma and study grief – something she knows quite well, though her sunny disposition doesn’t even hint at it. She published a study on the grief process as it varies among different cultures.

After finishing her degree through Athabasca University, she worked at the Women’s Shelter for more than three years, and then as an in-school councillor at Sir John Franklin. In 1999, the funding for that position ran out but came with a small payout. At the same time, Embleton’s downstairs tenant had moved out.

“Barb Bromley came for tea, because I knew her really well – I knew all the original families – she came for tea and she said, ‘Well, what are you going to do?’ I said, ‘I don’t know,’” Embleton says, adding that not working was never her forte.

“She said, ‘Show me your apartment,’ so I brought her downstairs and she said, ‘Faith, you’ve got everything ready for a yard sale, put it downstairs and open a B and B.’”

Arguing she knew nothing about running a B and B, she says Bromley was adamant that she already knew what she needed to.

The Embleton House Bed and Breakfast opened in 1999 and has welcomed first-time visitors and returning guests ever since. She’s had a Japanese soldier arrive to bicycle and camp from Yellowknife to Fort Smith in -40 C weather, adventurers trekking to the North Pole, others taking the Samuel Hearne trail from Yellowknife to Kugluktuk. She’s welcomed scientists studying permafrost and wildlife, and laughs that she keeps her guest list updated with each person’s professions – a valuable source of experts.

But, despite the new faces and wealth of stories the business has brought her, Embleton says it’s nearing time to close the door.

“Pretty soon, we’re going to sell it. Ken is now 70, and I’m 65, and we would like to be able to just have a normal life again and just travel,” she says.

“It’s really hard to give it up because you get to meet so many wonderful people and you become really close with them and they write and so on, but now it’s time for me to go visit some of them.”

When we came to Yellowknife, the road was like a cow path and if you met a transport on it, it was scary. When we got out of the car at High Level, we were in mud up to our knees and all the restaurants were just full of mud. I remember saying to my dad, “Where are we going?”

When we got to Yellowknife, this main part of town was here, but everything past the Catholic church was bush. Con Road had apartments – that was the first place we lived when Ken and I got married – it was $110 a month.

I think it’s the diversity of the people. I mean, there are people from everywhere in the world and so many cultural differences, and I think everybody gets along here more than most places.

A lot of gardening. Also, a few summers ago I raised a baby robin. He was left out in the driveway. I love animals, obviously, but I had a lot of fun with it. To feed it, I had this bird seed, and put it in my Magic Bullet and ground it to a powder. Then I got berries from the freezer from the season before and mashed it up. Then I’d take dead bugs from the front of people’s cars, ground it up and fed him, and he did awesome.

I just walk a lot. I walk the dogs a lot.

I think so. Ken’s born and raised here, but he’d like to move down south. But I like it here. When you’re moving all the time here and there when you’re young, I said, ‘When I get my feet planted somewhere, I’m staying there.’