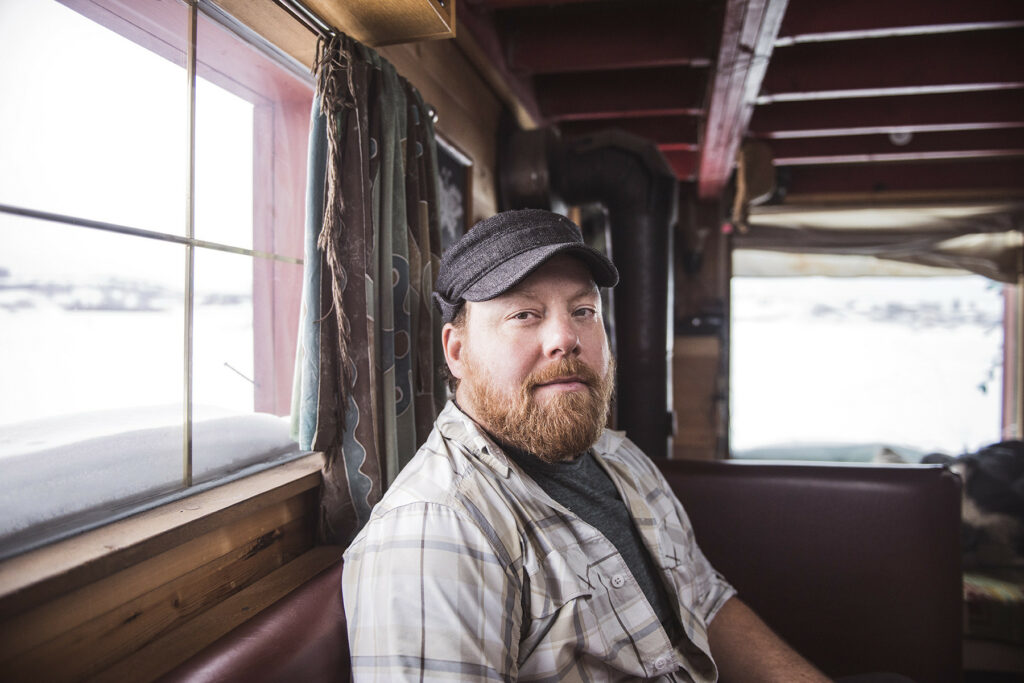 Wade Carpenter caught the northern bug while bobbing around off the coast of B.C. The recent biology and teaching graduate was working as a fisheries observer on the coastal trawlers – “Similar to that show on Discover channel, … like working on fair ride, 24/7.” On one of the boats he found James A. Michener’s Alaska.

Enchanted by this northern epic, Wade, originally from Lethbridge, Alberta, headed up in 1997 as a research botanist to the Yukon’s Tombstone National Park, around 100 km north of Dawson City. When the summer gig finished, he threw his name into a Canada-wide teachers job search and got a call from the principal of Yellowknife’s Sir John Franklin (a school, as chance would have it, he’d visited two years earlier as a student recruiter with the University of Lethbridge).

Within eight months of moving to Yellowknife, Wade was renting a houseboat. “That’s when I really started to fall in love with Yellowknife, and say holy cow, this is a unique kind of place.”

In December of 2007, he decided to spring for his own water-based abode. Seeing an advertisement for two floating shacks on the North Arm of Great Slave he and his then-wife snowmobiled 12 km out of town to take a look.

“We get out there and there’s seven kids in these tiny little shacks. The mother had given birth to one or two of them in these shacks, and [the shacks are] floating on barrels and had no decks and tarp roofs.”

He bought the shacks, jacked them up out of the ice and replaced the floats. A year and a half of renovations later, he towed the houseboats into Yellowknife Bay, where he’s lived ever since.

Wade’s progress towards becoming an NWT solar energy guru began in 2006, when he and a group of Sir John students decided to build solar panels on the roof of the school. It was a small system — only two KW — but it was the first solar panel in the territory linked into the power grid. This stood him in good stead when the position of Alternative Energy Coordinator opened up with the GNWT.

As a teacher, GNWT worker and houseboater, Wade has straddled the cultural divide between downtown and Yellowknife Bay for nearly two decades. This may, however, be his last winter on the bay. He’s building an eco-friendly duplex at Niven Lake and hopes to move onshore next fall. “I’ve lived in the subarctic without running water for almost a decade, and it’s time to move on.”

What were your earliest memories of Yellowknife?

I arrived around the 16th of December [1995] to talk at Sir John and St. Pat’s. My first experience was landing, getting a cab to the Explorer. I was shocked to find out the Queen and the Pope had stayed in the same building I was in, I was like, wow, they vacation here! I remember going to the Unicorn at the time – I think it became La Frolic and it’s Sonny’s now. And I remember seeing the sights of downtown. I really didn’t see much else, because it was -40 and dark. I didn’t even know there were houseboats at the time. Moving North was still a very romantic prospect.

There are unique lifestyles up here. The off-grid lifestyle is appealing, and I like the idea that someone would build a giant snow castle on the lake. One of my first Yellowknife experiences was being at the dump and looking over and seeing Walt Humphries, the famous dump columnist, and at the next pile of garbage was our premier. I remember going home and phoning my parents, and saying “Hey I was picking garbage with the premier and the dump guy!”

How do you spend your winter?

In the early days I used to get out and ski quite a bit, or mountain bike down the road with winter tires. I still do some of that, though not as much as I did in the early years. It’s something about living on a houseboat or in a shack. People would say ‘I’ve sort of lost the urge to go camping,’ and I didn’t know why. After a while, I realized that when you’re houseboating or living in a shack, you’re always camping. But I play a little hockey on Yellowknife Bay, and do a bit of skiing.

How do you spend the longest day of the summer?

My first few years up here was going to these medieval parties in the bush on Pontoon Lake, swatting mosquitoes, dressed-up as knight. It’s so surreal, here I am in the North, with the midnight sun, and I’m walking around the forest in a knight’s outfit. More recently, my Solstice has been spent on the houseboat crawl where all the houseboaters get together and we boat from boat to boat and have little snack and a drink and move on to the next houseboat.

Yellowknife is a pretty unique place, one of the reasons people stay is because you can do so many things here. Like when I first came, for 2 or 3 years I had a CBC radio show … a science show every Monday. Through the school I got to meet David Suzuki and got to know him quite well. I even met up with him and his wife at a Neil Young concert in Duncan B.C. a couple years ago. There’s opportunities that present themselves like nowhere else I’ve ever been. If you want to be involved, you can be involved. If you want to be involved in any committees, or to help the community, or even in politics. Whatever the line of work is, it seems if you put in the work, you can be doing the job you want to do here in Yellowknife.

Are you a YK lifer?

Most likely. I do like it here. I struggle with the winters and the darkness. I need to find a place to build a houseboat somewhere tropical for the winters.  If anything, I’ll always have a foot in Yellowknife, and I’m coming up on 20 years, so I’ll definitely hit the 20 mark.