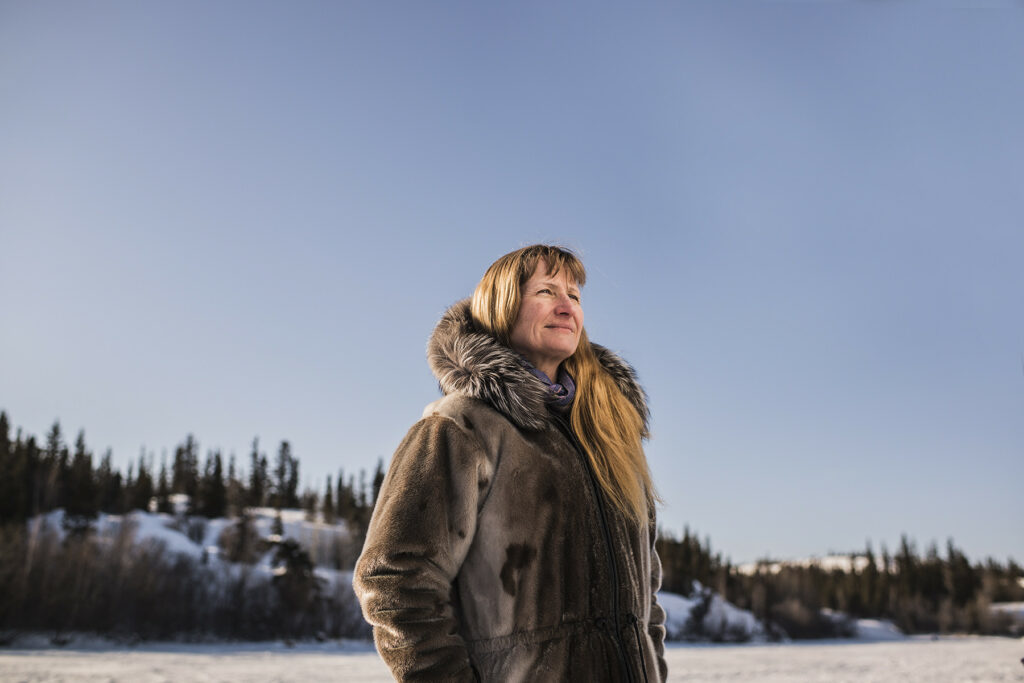 Cathy Allooloo had only been in Yellowknife a few months when she sold her soul to the City. It was 1981, and the whitewater kayaker, who’d recently taken a lifeguard job in Yellowknife, had a good chance of making it to the world championships that summer. All she needed was help getting to Minden, Ont. for the qualifiers.

“Pat McMahon was then an alderman – after that she became mayor. She took me under her wing… She went door to door and got funding for me from different businesses, she went to city council and they agreed to give me two weeks time-off.

“So Pat comes over with a check for me to my apartment up at Shaganappi and she says, ‘Okay, I’ve got good news, here’s some funding for you… but I had to tell them that you swore on a stack of bibles that you were going to stay for longer than two years and give back to the community in some way from your experience.’ At that point I thought I’d sold my soul. I’m like, ‘What?! Am I going to be here for two years?’ It seemed like forever when you’re 22.”

Cathy made the national team at Minden and went on to the world championship in Bala, Wales. Three decades after her Faustian bargain, she’s still in town and runs Yellowknife’s main canoe rental and touring outfit, Narwhal Adventure Training and Tours, from her home in Peace River Flats.

“I probably taught over 5000 people locally and in the North how to paddle, so I think I was true to my commitment. I think the investment paid off for the city council of the day,” she says with a smile.

At 58, Yellowknife’s veritable outdoors queen is still as energetic as ever. In the winter, you’ll find her skiing and skijoring the many trails around Yellowknife; in the summer, she’s out paddling on the North Arm (her favourite destination), teaching canoe workshops across the territory or running the Narwhal canoe dinner theatre. Last summer she won the Latham Island paddle race in the same kayak she took to Bala thirty years before.

Originally from Ontario, Cathy moved north following a physical education degree at the University of Alberta. From her job as a lifeguard and canoe instructor for the City, she climbed up the municipal and territorial bureaucracies as a recreation planner in the  “heady era when the government dumped $23 million into recreation facilities across the north.”

With government downsizing in the mid ‘90s, she left to focus on Narwhal, which she runs with two of her three children, and a bed and breakfast in their home.

“It was hand-to-mouth for sure, it was hard to let go of that cushy bi-weekly government paycheck, but I never looked back.”

A life paddling the North’s rivers and lakes and teaching a generation how to enjoy the outdoors has been rewarding, to say the least.  But it’s hard work too.

”Some people think, ‘Oh you have such a great life, the adventures and all that.’ Yes it’s wonderful, but there’s always tons of paperwork and cleaning toilets.”

It was cold but I remember Harry O’Keefe, the pool supervisor at the time, taking me on a tour and walking up Pilot’s Monument. I can’t forget that, seeing the smoke rising from Peace River Flats. Back then it was all shacks and a little bit scary to walk around, there was always loose dogs and these derelict shacks. I don’t know if you remember Stan the Man’s shack before they tore it down, but his was a little bit more high-end. There was not a lot in this neighbourhood; of course now it’s pretty much completely changed.

Yellowknife’s high point back then was Fraser Tower, with the polar bear logo on the roof. The whole profile of town was quite different. Where YK1 district office is right now, that was William MacDonald School, and every Friday night, or maybe Saturday, there would be roller-skating in the wooden floored gym.

I always remember people being really friendly here and I think that’s a thing that’s always continued through the 30-odd years I’ve been here. Yellowknifers are a special bunch.

Number one is the people. It’s a very cosmopolitan community. I remember my kids growing up, when they were little, their birthday parties would be like the United Nations; I still have pictures of kids from all over the world having birthday cake together. And I remember my daughters when they were getting into middle school, one of them had to do a project on racism, and I remember her coming and asking, ‘Mom, what’s racism?’ She’d never heard the word before, and being of aboriginal ancestry too. Later on they did experience racism but it wasn’t until they went south to school.

The other thing I really like about Yellowknife, I can go out my front door, put in my boat or slap on my skis and in a matter of minutes I’m in the wilderness. And then I can come home and go to the wave pool, and sit in the hot tub, go to the theatre. It has the amenities of a big city but yet within a few minutes, it can feel like I’m the first person that’s ever been wherever I’m going.

I’d have to say how short spring is here. This time of year, you get through the winter and it’s cold and it’s dark, then pow! It’s spring. And this time of year, I just get this desperate need to get out every day on my skis, because I know in mid April it’s done, it’s all dirty and dusty and maybe I’ll be able to ski a few more days on the lake but the snow’s gone. Often in years gone by, we’ve gone farther north for spring to Pond Inlet where my husband is from; the springs there just go on and on. Here it’s winter, a tiny bit of spring, then pow, it’s done.

Summers are frantically busy with teaching canoeing and kayaking, and tours. Our calendars are crazy – if you saw a picture, it’s just nuts how much stuff is going on each day.

But I have, usually, an infusion of young people returning from university who work here in the summer, so that’s really great. Last summer there was four full-time seasonal young people and a host of what I call my minions, young neighbourhood kids that are just keen to help out that I’m grooming for bigger things as they mature. Most of the kids – I still call them my kids, even though they’re in their 20s – started with Narwhal kid’s camp when they were 12 and have just kept in touch and kept taking training. I know one day they’ll go off become engineers and see the world, or whatever else, but for the few years I have them I thoroughly enjoy it.

I like to ski and skijor. I have three dogs, two Siberian Huskies and a Karelian, all hooked up to one line. It can be fast, but it depends on the day and the mood. The fastest is when you’re going downhill at a corner and they see a squirrel, then your heart is in your throat – I do the bum slide going down some of those hills. Sometimes though, they lollygag when there’s been a fox out before them so they have to sniff every little spot.

There’s so many skidoo trails that I like exploring. I just take my GPS and go. My favourite is probably from here, across by Gary MacDonald’s shack across Yellowknife Bay, then there’s a series of lakes and portages that bring you out to Duck Lake behind Dettah and then back along Yellowknife Bay.

What kind of opportunities have you found in Yellowknife that you don’t think you’d find in other cities?

It’s a great place to raise kids, because there’s so many opportunities like sports and arts and music, and yet you can just take your kids out to the East Arm for two weeks. So that’s kind of great. I really enjoy hunting with my son, so that’s something we can do as a family. Lately it’s been moose, before it was caribou. In the past we’ve hunted bison. Last fall we were teaching a course in Kugluktuk and we stayed an extra few days and went muskox hunting and got a muskox.

From a business perspective, Yellowknife is probably not all that different than anywhere else. If you have the interest and drive and vision, there’s lots of opportunities here.

Haha, well as I say, back when Pat McMahon handed me that check, I was like, ‘Really?’ But 34 years later and the mortgage is paid, three children and two grandchildren and no pension, you won’t be seeing me retire anywhere else anytime soon. Although as the years go by and the joints start to ache, Avens is looking more and more like a viable option.