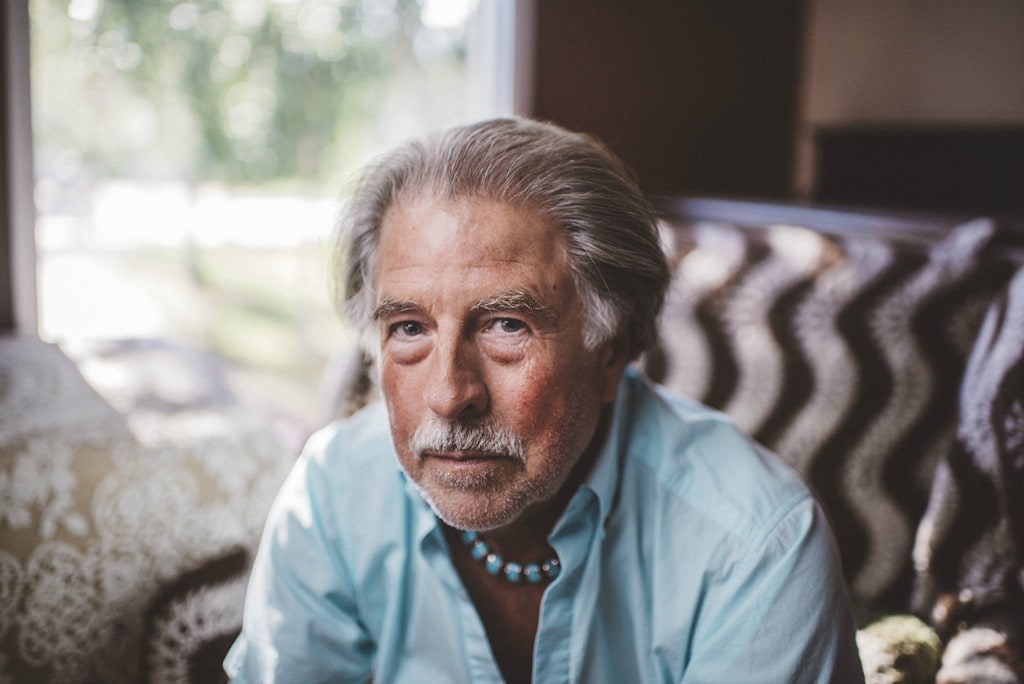 Cheerily wheeling down the road on his bicycle, dressed in a bright matching outfit, a turquoise necklace flashing as he passes, Arthur Boutilier is a part of the local landscape, a colourful, mobile urban feature.

Where did he come from, and what does he do? And why all that turquoise? EDGE met with Arthur at his house on Matonabee Street to find answers. “It’s the only turquoise house on the street,” he told us. “Just look for Casa en Sueno. The House of Dreams.”

We arrived to find Arthur out doing some yardwork in the bright sunlight of a stunning late July afternoon. After a brief tour of the large, eclectically furnished home he shares with his wife, Dale, we begin. Arthur’s not too sure about this whole idea of doing a story just about him — “It doesn’t seem very humble,” he says worriedly — but he’s a gracious host and a natural storyteller.

He’s from Halifax, where he grew up sailing on the Northwest Arm with his family, and gazing at the skies through a telescope with his photographer father. “We’d go out on the lawn and we’d look at the heavens, the rings of Saturn and the moons of Jupiter, the Andromeda galaxy. That was my first spiritual experience, the goosebumps, the hair on the back of the neck. Feeling very small in a vast universe.”

At 16, he went to Dalhousie, studying engineering and architecture, “and then I took my masters in landscape architecture at the Harvard Graduate School of Design. That involved regional planning and urban design. Not so much gardens and stuff like that.”

It was the early ’70s, and after Harvard, a very young Arthur found himself in New York, “doing urban design, urban planning, town planning, urban renovations.” He worked on an award-winning project to overhaul the town of Aurora, Illinois, and did some new town planning in California. “We tried to be innovative in our design, but a large part of it was developers doing the same old thing.”

It was during this period that he started to develop his distinctive style. Why turquoise? “I think it’s part of my spirit, my soul, in feeling part of mother nature and the land. I have a whole collection of necklaces. When I was travelling through Nunavut in the 1980s, working with the Inuit, the amulet, the necklace, was often worn by men. My nickname became Ujamilik, which is ‘the one who wears necklaces.’ I sort of became known for that. Turquoise is a summer, a warm-weather, bright-sunshine colour. Like the sky. So that’s where it came from.”

In the mid-’70s, Stateside work ran out, so Arthur returned to Halifax, and got a job with Parks Canada. While on a trip to the Torngat Mountains in Labrador in 1976, as part of a group exploring the possibility of creating a national park in the region, he came across “tent rings and tools and evidence of human occupation. And it completely blew my mind that people lived in these awesome, powerful mountains. It really got my mind thinking about the North and coming North. So, that’s how I ended up here, really. Falling in love with that Arctic light at the Torngat Mountains.”

He became part of a public works charter led by planner Igal Roth, travelling to the communities of Baffin Island. “[Roth] was my mentor. He was loved by the Inuit. He spoke six languages, he played the violin, he was multitalented, a renaissance man. A leader among leaders.

“Town plans up to that time were done by consultants, and they sat on the shelf and it didn’t make any difference. The housing corporation would go in and tell communities how many houses and where they were going to go. But Igal started community-based planning, where you go in, you don’t keep the plane waiting at the airport, you talk and you communicate. You’re very quiet, you observe the elders and you translate everything and you document. You built a trust and relationship with the local people. Using local knowledge to come up with better design, better planning.”

Meanwhile, back in his new hometown, that process was not going so well. Arthur doesn’t mince words when asked about Yellowknife’s disastrous development decisions in the years after his arrival.

“Oh it was terrible,” he says, quietly shaking his head. “All of the urban planning mistakes that were made in the south were made here. Now, I liked Pat McMahon [long-term alderman and Yellowknife’s mayor from 1987 to 1994]. She was a friend, and I helped sit on an urban design thing with her. But there were mistakes made. Y’know, the strip malls and… mostly pavement, mostly requiring a family car driven by one person, and it’s not greenspace-oriented, it’s not local-carbon-footprint-oriented, or pedestrian-and-bicycle-oriented, and beside that, it’s an eyesore.”

It’s the summer of blasting in the city, with major developments carving into little pockets of greenspace from Twin Pine Hill to the once-bucolic back alley that runs across the street from Arthur, behind Matonabee, and to Arthur,  “It almost feels like a losing battle.”

As for his own career, he’s modestly proud of what he and his coworkers managed to create. “We set the bar for really good, solid community-based town planning. And then, after that, when I got involved with regional land-use planning — the Lancaster Sound Regional Land Use Commission, the Nunavut Regional Planning Commission — again we led the way for others to follow. So, we did good work. It was teamwork. Synergetic. The whole is greater than the sum of the parts. It’s a real thing. It’s not just theory.”

Arthur’s passionate about synergy, and teamwork. It saved his life.

Until the early ’90s, he was fighting a losing battle with the bottle. “Alcohol had become my companion, my friend. Alcoholism is a disease of loneliness. I was working hard and playing hard, and it just got to the point where I couldn’t do it any more. So I hit bottom, went out for treatment. And everything after in my life was as a result of having help. I learned that it’s not a sign of weakness to ask for help. It’s a sign of strength.

“I met my wife Dale here, in 1991, when I sobered up. And through the gift of sobriety, we became friends, and we developed a very loving relationship that continues to this day. We just celebrated 21 years, on July 10. “

Another great love in Arthur’s life is his photography. “My dad was a very creative photographer, who had a photo-finishing business, so cameras and film were just around us.

“At 16, my father loaned me his camera to take to Expo 67. Colour slides. Kodachrome. And I took a whole bunch of nighttime pictures. It was brilliant! I was hooked. I was sold. I’m self-taught. I don’t consider myself a professional photographer. I don’t sell my work. I don’t do weddings. But it’s more than a hobby. It’s a passion. A passion Dale and I share. Creating and capturing images. I use both words. Paul Nicklen talks about creation in the sense that you plan, you see the image before you actually capture it digitally. And then the chance element, the serendipity. My raven picture that’s out of focus? I didn’t plan on that image. But it was a gift. From the creator and the larger universe. I was in the right place at the right time.”

What were your first impressions of Yellowknife?

I was a little bit in shock. I was wondering what I was doing here and how I got here. In a metaphysical sense.

People. The community. People here are friendly, they smile. You say hello to one another on every city block when you’re out and about. People here are also very creative. There’s incredible creativity in this town. I mean, theatre, and weaving and knitting and glassblowing and dance and opera and painting and everything.

When this community opens its doors and hearts, you can’t help but feel that you’re in a very unique and advantageous place. Very welcoming and warm. It’s a special place to live.

The darkness. End of January, February. Cabin fever. If we could put today in a bottle and open that bottle in late December or January or February, and be transported, like Star Trek, that would be my gift to humanity. I have Seasonal Affective Disorder, so I’ve got a little light on my exercise machine. I have a recumbent bicycle that I use every morning. Well — five mornings out of seven. I do 15 minutes of strenuous exercise to Katy Perry. The one where her four hits are all together.

Yardwork. And we have our bicycles, so we love our bicycles. We ride together. And that’s a whole ’nother level of freedom. We don’t have a car. What money we would have spent on that, we spend on holidays. That’s one of our other passions, which we couple with our photography. And we get out to restaurants more. We love cooking. We’re both in the kitchen all the time, but we love going out. And having people over for barbecues. And going to movies. We go to more movies in the summer. And visiting with neighbours, and just hanging out, doing nothing!

Our wood stove. We have it going probably six out of seven nights a week. We use up a lot of cord wood. It helps offset the cost of having two furnaces in this large home. And it’s our salvation. It provides much more than heat and partial relief on our fuel oil bill. During the long, winter months, the cosmic glow of the fire and hearth helps sustain us spiritually and emotionally, as well as physically. In a sense, it becomes our winter “sun.” We largely keep to the Keeping Room, that room down there with all the photos on the walls, and our electronic cottage office. We keep stuff in it. Including ourselves.

What kind of opportunities did you find here that you wouldn’t find elsewhere?

[After a long pause] …I guess everything. Living. And loving. Sense of fellowship. Layers of community. Having friends who have led the way for me, and have helped me.