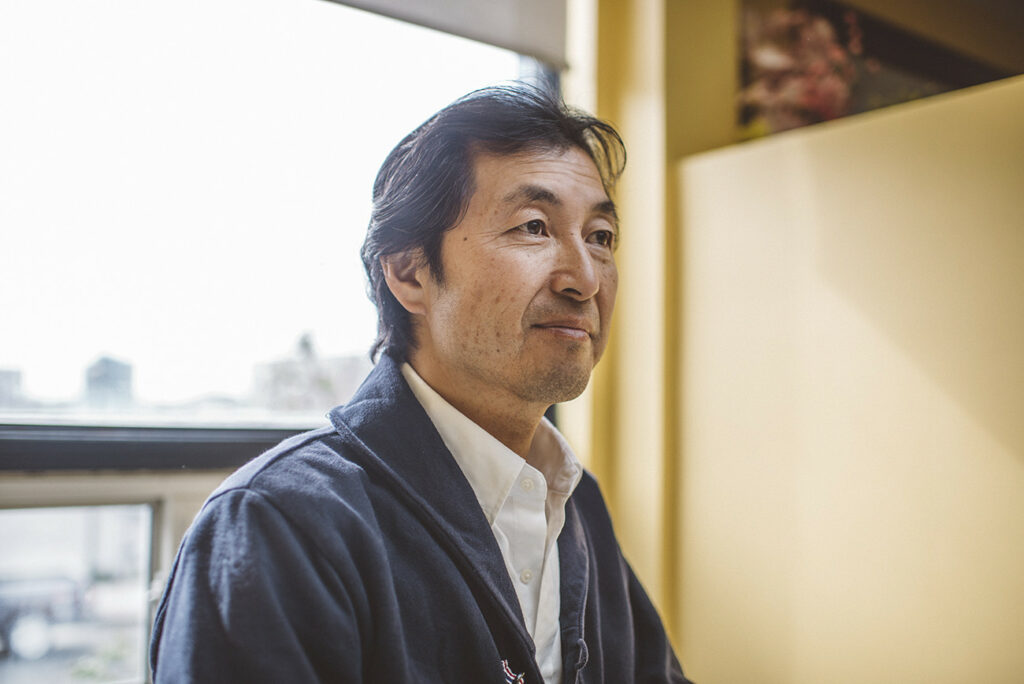 “Go straight north,” Seiji Suzuki’s client told him after boarding his helicopter in Yellowknife one day back in the early ’90s. “Where are you going?” Suzuki asked. “Straight. Go north. Make it 90 degrees and turn right,” was the man’s only response.

So he took off, and they headed straight north. It felt so secret, back then at the beginning of diamond fever, taking these crazy people out to a tiny, one-tent camp so that they could hunt for veins of the gems.

Suzuki’s curiosity about wide-open spaces was first sparked while he was a young pilot in Japan, listening to the stories from fellow flyers talking about Canada. Growing up in densely packed Tokyo, he craved the space and freedom they described. He’d chosen a career as a helicopter pilot since it offered solid work opportunities in Japan, but also for the adventure, after all.

When he arrived here in 1993, he was only 27 years old and the North was in the middle of what he calls a “little diamond rush.” He was soon being sent up into wildernesses where there was nobody but himself and a geologist for almost 100 kilometres around, something he would have never experienced in Japan. Suzuki took any opportunity to learn about the people and the territory wherever he landed, and he loved it. “The feeling is not like doing your job,” he says. “It’s like you’re still travelling. Going around the North and still travelling.”

After a while, people back home were asking him about the place he’d describe to them as having “diamonds in the ground, and Northern Lights in the sky.” There were no pamphlets, no internet for reference then. Suzuki saw another opportunity, and soon started Canadian X, a tour company that helped to pioneer the Japanese tourism industry in Yellowknife.

“We did that for 12 or 13 years for almost 2000 people every winter, just from December to March. People came from Japan, Vancouver, Edmonton and Yellowknife. Usually we took them out on a small plane with the skis.”

The business thrived, but in the final years of Canadian X, Suzuki was already planning his next project, Sushi North. He missed Japanese food, so he opened a restaurant with the help of another Japanese pilot, whose family had some experience in the industry. They brought a sushi chef to Yellowknife to train them for the first six months. Eight years later: “So far, so good,” says Suzuki. “I always like to be doing something. That’s never ever stopped. I just keep moving and moving, and if something interesting comes up, I just go grab it and do it.”

He now splits his time between Sushi North and flying for Great Slave Helicopters. (He had to postpone our first interview because he was busy helping with the forest fires.) This is a man who is always on the move, looking to the skies of the North with endless curiosity and an eye for opportunity.

Still I enjoy the Northern Lights. Even though we’re not doing the tours. I live out at Cassidy Point and it’s no lights, it’s quiet and you can open the doors and go: “Wow, that’s nice Northern Lights” and stuff.

The other thing is that my dogs are never leashed. They just go out and come back and go themselves. Those are the things I enjoy. The number one thing? I don’t know. The people are nice. The big space is also totally different than where I grew up.

I need more variety of food. Like Korean food, Mexican food, etc. [In other places] they have lots of variety, with different forms of restaurants than here and that’s really nice. I really enjoy Yellowknife but I miss the food [in Japan] sometimes. I mean, with Japanese food there’s maybe a thousand kinds. A ton of different foods and also seasonal food. Wintertime and springtime and summertime, people are always waiting and then going “Hey, wintertime has started, we get to eat this one and this one” with so many different things. But Yellowknife has not much selection. We have a few, but not much.

I bring my staff and friends back to my house and we spend the weekend or just a night looking at the Northern Lights.

Summertime, I keep flying. It’s a really busy season. Especially in the summertime for firefighting stuff, since Great Slave has a contract from ENR with the firefighters. In the summertime still, I’m doing my travelling. It’s not travelling, it’s a job, but it’s going to another community, seeing small things in the bush and whatever, always exploring. So I still say it’s my travelling. I’m up in the machine working with the boys, putting out the fires and I’m just working in the bush.

What opportunities have you found in Yellowknife?

It’s really unlimited in opportunity. Anything you want, you can do it. You can open a restaurant, or you can open the other company, or you can just do travelling, canoeing for six months or whatever. Most people are thinking “Hey that’s too far away, that’s too cold, you can’t do it, no, no, no, but still I’m going to work with everything we have in this town. It’s still really wide open for everybody. That’s what I’ve figured out. Compared to down south there are more chances here. There’s not competition on things.

I’m always thinking “Hey, maybe I can open a grocery store and make a little money.” I’m always thinking about those things. Another restaurant or a gas station or many kinds [of work], like a painting job or whatever; I might think “Hey, I can be a painter!” Opportunities are unlimited.

We can do that in Japan, but there is too much competition. Japan is too much in service. We don’t have the gold and oil under the ground, so we have to be making something. So we’re always making good things. Always thinking about more good, more beautiful, more perfect. So, for example, someone brings in this table and a little tiny, tiny chip is there and maybe here, I’d say it’s not a big thing, maybe just a little scratch, it should be okay. But maybe in Japan, a sales manager would come over and say “I’m so sorry, we have to replace that right away. Right away,” and there’s many examples like those. If you want to start a business, like selling tables, it’s tough [in Japan].

So when I started working here, many fellow workers would say “Seiji, don’t work too hard, we might lose our jobs. You’re working twice as much as the other guys and we’ll lose our jobs. No, stop it! Settle down and have a coffee.” I really appreciated my employer, though, and think if we work twice as hard, maybe we can make more money. I have to say I have a loyalty [to my employers] and [if] I’m working for you, whatever you need, I’ll do. I’m always thinking about more opportunities up here. So that’s kind of why I’m still enjoying Yellowknife.

I can go back to Japan at any time. I can get a job in Japan at any time, so why do I just keep going up here? It’s 22 years, and still I enjoy it. When I came up to Yellowknife for the first time, I met a few ladies who had been in Yellowknife for 50 years, and I thought “50 years? Up here? Are you sure? 50 years?” They said exactly the same thing: that they still enjoy it. Okay, alright. Well now, I’m 22 years here. A Yellowknife Lifer? I don’t know. Winter is getting harder. Maybe I’ll go back to a warmer place, even Japan. Japan is still nice, I like it, but summer is too hot, winter is too cold with the humidity. Yellowknife is cold but really low humidity, so the feeling is not really cold. Springtime and autumn time, Japan is beautiful. I could spend spring and autumn over there, maybe summertime go back to Canada, maybe winter go to some really hot place or whatever. That’s what I’m thinking about.

Other Reading: The battle to protect Alaska’s great wildlife sanctuary