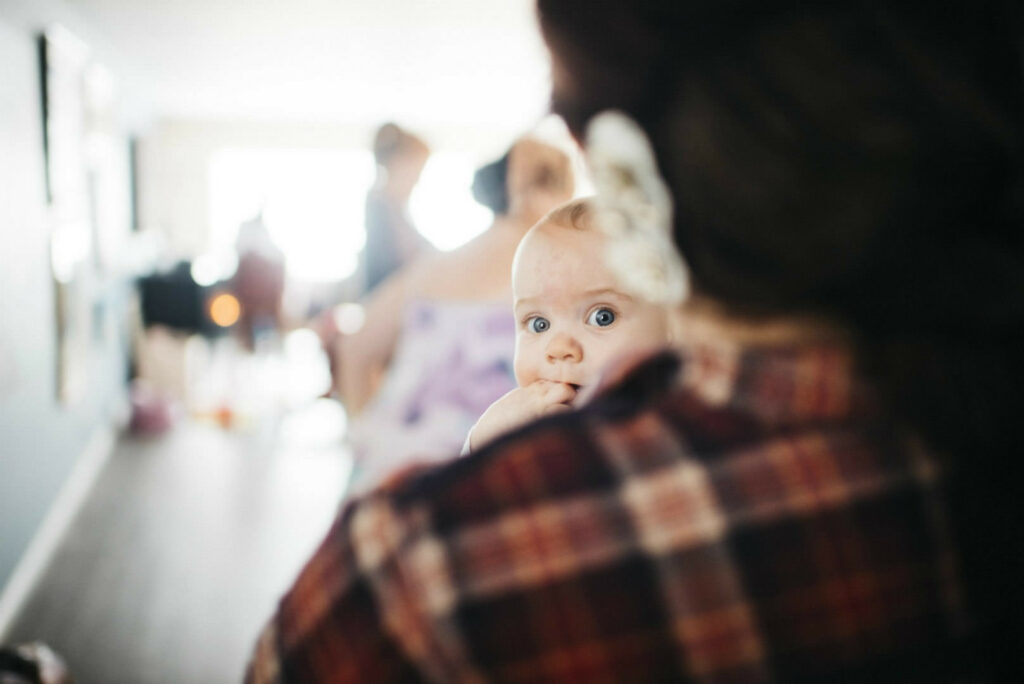 Five days after having her daughter Aveline with a midwife in Hay River, Lindsay Arseneau was weathered in by an April storm – her return flight to Yellowknife cancelled. Her husband and their young son had flown home before the storm struck. She’d have to wait two more days.

She laughs about staying with a friend while her hormones surged, but says what really made the extended stay doable was that her midwife was on call, all hours of the day. “I knew that anything at all I needed, I could text her and she would come right over,” she says. “It wasn’t too bad. It was two days, but two days when you have a five-day-old is a long time.”

She’d had a challenging birth with her son Felix at the hospital in Iqaluit. This time, with slightly fewer logistical barriers, she was determined to give birth with a midwife. That’s not an option in Yellowknife, but Hay River has two. “With my first, I had back labour the entire time. After four hours of pushing, nobody once suggested that positioning myself on all fours would open that space,” says Arseneau. “Nobody acknowledged that when I was asking, ‘Is the baby in the right position? Why do I have so much pain in the back?’ It had worn me right down.”

“I don’t have my mother in my life anymore and having someone I trusted completely to help me deliver my baby was really important to me.”

Soon after her son was born, Arseneau and her husband moved to Yellowknife. “I had trouble breastfeeding for three months until I moved here. I was left alone with a pump,” she says. “I don’t have my mom anymore – she passed away about a year before my son was born – I didn’t really have anybody else. For me, a midwife was the closest thing to a surrogate mom.”

With some of the money she inherited from her mother, Arseneau covered the cost of midwifery care for her second birth – including a couple of trips to Hay River for check-ups throughout her pregnancy and about a three-week stay around her due date. “This is most likely our last baby, I won’t have the option again,” she says. “I really believe in the midwifery model of care… I don’t have to second guess that what they’re going to do is the best option.”

The Facebook group NWT Citizens for Midwifery has a stream of comments and links to articles on maternal health and services in other regions, and calls to bring a midwifery program to Yellowknife and other parts of the territories.

To some extent, it’s in the works. There was a community-based program in the capital, the Yellowknife Health and Social Service Authority Midwifery Program, initiated in 2006. The community-based model provides a pregnant woman with a midwife throughout the duration of her pregnancy and into her postpartum care. One midwife was hired but that position became vacant six months later. Another midwife was hired in the fall of 2007, with services picking up again in 2008 and running into the spring of 2011, when the entire service was suspended.

“We have had midwives, but it’s never been a sustainable model because there’s always been one at a time; and midwives, the community of midwives, do not work as a solo entity,” says Johanna Tiemessen, one of the administrators of the Facebook group who is also trained as a doula – someone who supports and assists women during pregnancy and postpartum. “They need back up, they need help, you can’t be on call 24 hours a day, seven days a week, 365 days a year.”

Though she still occasionally offers assistance to friends, Tiemessen is no longer a practicing doula and says, like midwives, doulas are in high demand and face heavy client-loads in Yellowknife. In order to make an impact on the community and offer sustainable midwifery services, she says Yellowknife needs more than a single midwife to support the number of clients in town.

That’s the main recommendation included in a 2012 territorial government report on options for midwifery services in the territory. It recommends eight midwives working in the capital under a community-based model, such as what’s now available in Fort Smith and Hay River, which both have two midwives. The report also recommends extending that program into other communities. In order to make this feasible, a rate of 25 births per year is needed in a community, which the report found could be supported in Hay River, Inuvik, Yellowknife and Behchoko. It recommends two midwives be employed within those communities for every 50 births.

Midwives help women during all stages of their pregnancy, including delivering their babies in their home communities, rather than having to fly to Yellowknife to give birth. Spending extended periods of time away from home has been shown to impact both labour and postpartum and has been linked to family and community breakdown, according to the report. And that’s not all. Evidence suggests that evacuation for low risk women may contribute to postpartum depression and increased rates of maternal and newborn complications.

“It’s been studied to death, I don’t really know what else we need to do.”

Since Fort Smith introduced midwifery in 2006, 113 women have been able to stay in their hometowns to birth their babies, instead of making the costly, and inconvenient trip to Yellowknife. For all of these reasons and more, the midwifery programs in Fort Smith and Hay River are a much-valued service, says Kim Riles, director of territorial health services with the Department of Health and Social Services.

“They did solid work in establishing the need for, and benefit and value of the community-based program in Hay River,” says Riles. “We’ve seen great success in the implementation of that program.”

Despite that success, and all the benefits outlined in the detailed report recommending a community-based midwifery program in Yellowknife and beyond, the government – with little explanation – is looking in a different direction.

In the legislature, Health Minister Glen Abernethy says his department is “exploring the possibility of a territorial model.” The territorial model could still mean eight midwives in Yellowknife, but other communities wouldn’t have the services extended to them on a full-time basis.

“Women from the communities where there are no birthing services who are referred in would have the option to select midwifery care while in Yellowknife,” says Riles. “As well, those midwives could be assigned a community where they work with nurses on the clinical care of patients and visit a few times per year.”

While the government hasn’t explained why it’s ignoring its own tried and true midwifery formula, or the recommendations in the report it commissioned, some midwifery advocates say the reluctance to empower midwives to deliver babies in hospital settings outside of Yellowknife could stem from backlash to the program in Inuvik. Inuvik’s midwifery program was fully funded and ready for roll-out, until the health authority determined it was best to have an existing nurse practitioner trained in the midwifery care model assist doctors in labours instead.

The explanation given by the health authority was that there would not be enough births to sustain both midwives and doctors, while still allowing doctors to attend enough labours to maintain their skills.

In Yellowknife, advocates say the obstetrics team at Stanton strongly supports the midwifery care model and integrating services. But Riles says the government sees having the centralized territorial model in place first as key to supporting any future moves to place midwives full-time into smaller communities.

Midwifery and the rollout of a program for the territory is something that came up several times during the spring sitting of the Legislative Assembly. MLAs are pushing cabinet to make real progress in getting the service as soon as possible. Two midwifery consultants are working under the Department of Health and Social Services to develop a midwifery plan, and Riles says ideally they’ll be gathering feedback from various groups starting in the fall in order to move forward.

But some say that plan isn’t coming fast enough.

“It’s about giving people options,” says Frame Lake MLA Kevin O’Reilly, who, along with his constituents, is growing impatient. “It’s been studied to death, I don’t really know what else we need to do.”

“I understand the department has hired consultants to help design a territorial program and that is including offering services in Yellowknife,” says O’Reilly. “That will need to be prepared into a so-called business plan and will need to be taken to cabinet for approval and then money can be put into Health and Social Services to allow this to happen. I’m just wondering if there’s ways to shorten this in some way to get pre-approval from cabinet for the program in principle.”

Riles says a midwifery program is not something likely to be seen within the next year, but it is a priority of the 18th Legislative Assembly. And until the program is designed, the extent to which it will open access to women and offer a choice for maternal care is unknown.

Arseneau says there are a lot of women like her in Yellowknife who are away from family and other people they might seek support from throughout their pregnancy and afterward. The importance of those support systems was highlighted by her experience giving birth in Hay River.

“Giving birth in a city that’s not really your home, I have a whole new perspective on women who come to Yellowknife in the midst of strangers,” she says. “You don’t have your friends to call on whenever you need them.”

Having gone into labour unexpectedly fast with her daughter, she summoned the owner of the Hay River Suites where she was staying to come over in the middle of the night and care for her son while she and her husband rushed to the hospital. Despite the surprising pace, Arsenau says giving birth to Aveline was much more in line with the experience she had hoped for. She’s quick to emphasize that that isn’t a knock to obstetrics in Yellowknife, she just wishes other women also had the choice.

Tiemessen agrees. “The obstetrics unit at Stanton Territorial Hospital is wonderful but it is intermittent care. There’s not that continuum of care that a midwife offers before and during the pregnancy, and post labour,” she says. “Most midwives have breastfeeding training, lactation training and can help continue to provide that calm and confident energy to a pregnant woman, a woman in labour, a first-time mum…You have an established relationship with this midwife that carries you throughout his process.”

With homebirths not an option in the territory and few other alternatives available, mothers like Arseneau are facing steep bills – she estimates her total cost was around $3,000 – to access the services of their choice. For her, it was worth it.

“I don’t have my mother in my life anymore and having someone I trusted completely to help me deliver my baby was really important to me,” says Arseneau. “I walked away from this birth really feeling empowered and strong instead of like a patient, and I wish this for all women.” 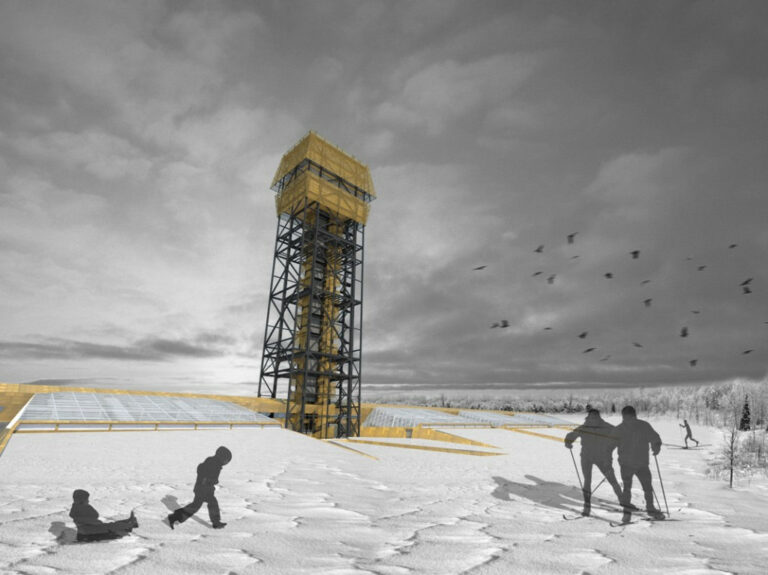 Say Goodbye to the Robertson Headframe