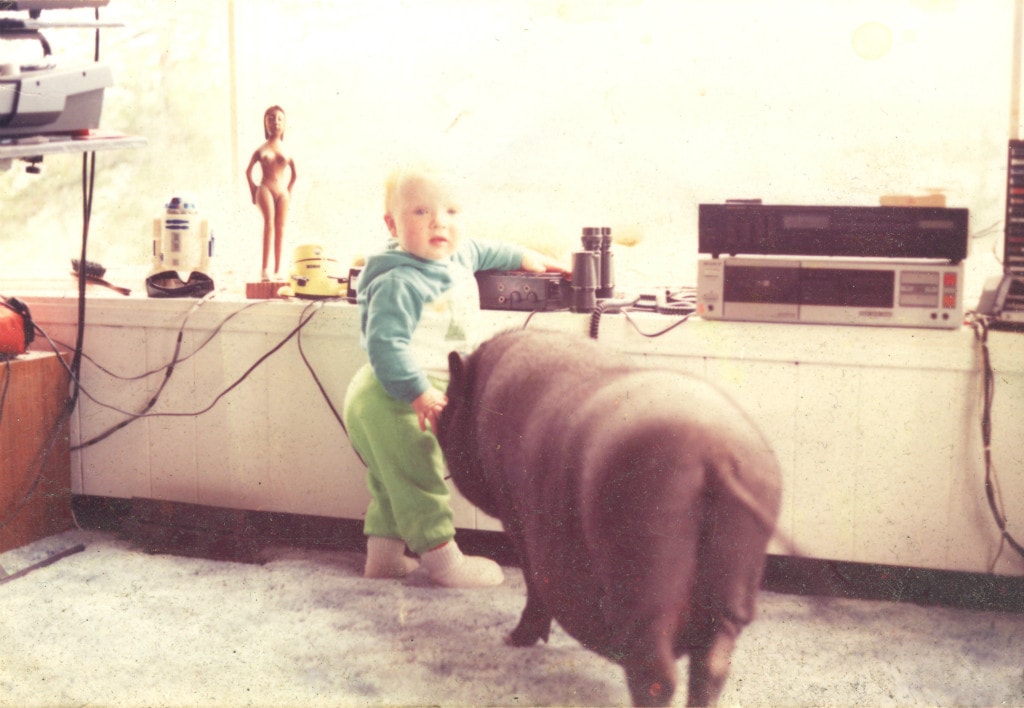 Trail’s End’s horseshoe of colourful, picturesque modulars is one of Yellowknife’s hotbeds of quirk. Its citizenry are a lively mix of every imaginable sub-section of the city’s social fabric. From environmentalists and writers, to capitalists and miners, the neighborhood is a vibrant ecosystem where pretty much anyone is accommodated.

But is it true that at one time a liquor-loving pig made up a piece of this ecosystem?

The pig was known as Pig Floyd — an homage to the legendary psych-rockers — and lived with his owner Paul Jackson, becoming a fixture in the neighborhood during his lifetime.

Floyd’s journey began in 1989, when Jackson was attending a course in Edmonton soon after moving to Trail’s End and saw an ad in a newspaper. “I had been wanting to get a pet for my place and saw these pot belly pigs in the paper; they were only $75 and they’d send them up to Yellowknife,” says Jackson, “Soon enough, I’d ordered one.”

Floyd lived inside a trailer with Jackson, but he became the neighborhood’s pig before long. “I would be outside working on motorcycles, and at some point he just started taking off and exploring the neighborhood,” says Jackson, “I used to have to go out and grab him after around a half an hour, though he never left Trail’s End, but eventually he just started coming back every half hour.” You would know his route from the trail of torn shrubbery in his wake.

Floyd also became well-known for his penchant for drinking beers. “A friend of mine used to crack a beer and pour some in a little dog bowl and Floyd would just suck it right up,” says Jackson, “A buddy of mine figured the pig could drunk faster than he could, so they had a competition and the pig took him every time!” Pig in a blanket: Floyd, taking a break

The pig became so well-liked, Jackson recalls Floyd receiving invitations he didn’t. “There was a guy retiring in town, and he was retiring to a farm,” he says, “The people in his department heard about the pig and thought it would be funny to have him there. They invited Floyd, but not me!” Jackson recalls with lighthearted incredulousness being called to drop off and pick up Floyd from the party.

Neighbors remember Floyd fondly. “My recollections are of a dainty, sweet little pig who wandered around the neighbourhood, similar to a dog, looking for treats,” says long-time Trail’s End resident Linda Todd,  ”He was a wonderful character.”

In 1994, Floyd got too big for his britches and was sent up the road to a petting zoo at a dairy on the way to Rae, to live among chickens and other farm animals. “He was close to 250 pounds,” says Paul “We tried to keep him on a diet, but it just became too much.”

Floyd passed on to the big bacon bar in the sky six months later. It came of natural causes, according to the vet.

Another chapter concluded in a long book of Yellowknife quirks. Cheers, Pig Floyd. May the cold ones be infinite in the afterlife.