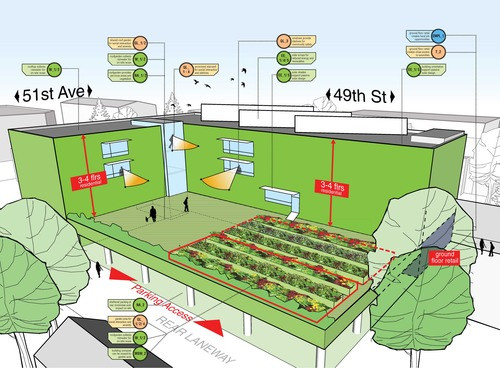 Yellowknifers got a first look last week at plans for an eco-friendly demonstration housing project that aims to do nothing less than change the way life is lived in the North.

Lead architect Wayne Guy described the project that will take shape over the next year as a “once-in-a-lifetime opportunity” to find a homemade answer to the high cost of northern home construction and operation.

It presents “an opportunity for economic development and creating capacity with new technologies in the building industry,” said Jeff Humble, the City’s Director of Planning and Development.

It can be a model “not just for Yellowknife but for other communities throughout the North. We hope to get many developers looking at this project and using the ideas, or making improvements,” Humble said.

Originally proposed for the Range Street redevelopment scheme – stalled by the refusal of key landowners to sell – the project has been moved two blocks north, to a site almost hidden away in downtown Yellowknife on 48th Street next to Boston Pizza.

Key elements that set the four-storey building apart will not be immediately obvious to passers-by or those drawn to businesses that are to occupy its ground floor storefront.

A preliminary sketch shows an L-shaped building that opens to the south. This southern exposure will create a micro-climate for a second-storey garden and social area that hide a ground-level parking lot – though most residents may choose to walk to work, school, entertainment or shopping from the building’s central location. The dotted line shows a five-minute walk from the project site.

Green garbage will be composted on site; the roof will collect rainwater and solar energy. The design objective is to reduce demand for external energy sources.

Entrepreneur Tony Chang owns the project’s 48th Street site and will act as developer for the project that will draw on a wide range of experts, including TV personality Mike Holmes, who will work with Skills Canada and the NWT Construction Association to train workers and contractors in new building technologies.

Construction will begin next year and the project will be monitored for two years after to measure performance against design objectives.

The Canadian Northern Economic Development Agency has put up $600,000 for the design phase and City Hall has made a similar in-kind contribution.

Last Wednesday’s noon-hour presentation at city hall was more a shopping list of possibilities than a slick rendering for the 24-unit eco housing project that aims to be cheaper to build, own and operate than anything now on the market.

While most in attendance seemed supportive, not everyone approved. A woman who identified herself to Guy as an architect left after expressing disappointment about the lack of specifics. But the absence of firm detail was the point of the presentation.

“The public is being invited to participate at every level,” Guy said. There will be another meeting in September to hear public comments.

The project has three legs, said Humble: environmental, economic and social. “We will try and find a balance between the three. Innovation and demonstration are at the heart. We want to balance that with affordability, and push that as far as we can.”