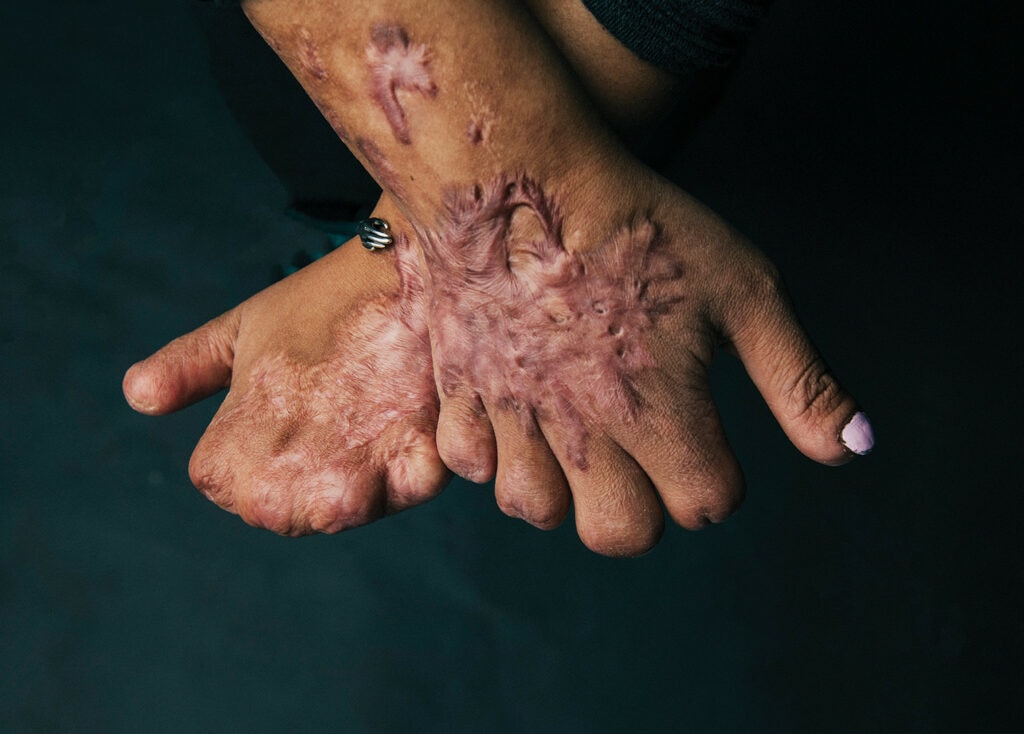 Therese Estacion's hands became necrotic and required partial amputations after doctors administered high doses of blood pressure medication to pump blood away from her extremities and her vital organs and brain in order to save her life. Photos by ANGELA GZOWSKI

“I got sick,” is what I usually tell people when they ask me, “What happened to you?”

It was August of 2016 when this major, transformative life event occurred. That summer, while travelling home from Tofino, B.C. with my partner, I caught a rare bug named fusobacterium necroforum. Actually, the bug could have been inside of me the whole time. Dormant and still. My doctors could not give me an exact timeline as to how I came in contact with the bug, or our point of interaction for that matter. But what they did say was less than three people out of a million contract the bacteria, and when they do, only 20 percent of us ever survive. In my case, the bacteria caused my body to go into septic shock and proceeded to attack my reproductive organs, which led to an emergency hysterectomy. I was just 33 years old.

The events that followed have become fragmented and hazy since I was unconscious for the most part. However, I was told that the evening I was admitted, my partner was advised to phone my parents and tell them to fly to Trail, B.C., and say their goodbyes. Somehow, my body stabilized, but, with the aim of keeping me alive, my doctors administered high doses of blood pressure medication to pump blood away from my extremities and into the more important parts of my body – my vital organs and brain. As a result, my extremities slowly became necrotic.

In total, I spent six months in the hospital system. I bounced around from hospital to hospital with my necrotic feet and fingers until I was finally admitted to West Park Rehabilitative Hospital’s amputee unit in Toronto. By September, it was evident that my feet and fingers were unsalvageable and had to be amputated. Although this phase in my journey was incredibly surreal, it required a great deal of my energy to remain present. I knew that there was no use to being afraid since surgery was inevitable. Instead, I saw it as a task I was always meant to do. My sense of spirituality – which is influenced by the Catholic faith my parents raised me with, as well as animism and taoism – helped me accept the difficult transformation that was about to occur. However, there is no denying that my staunch support network, which includes my family, partner, friends, colleagues and psychotherapist, saved me from despondency and the perturbing thoughts I sometimes had. Throughout my whole stay in the hospital system, my parents missed only one day because of a snow storm. And instead, one of my best friends came and brought me dinner. The week before Christmas, my coworkers showed up to surprise me with Christmas carols and pizza.

Therese Estacion became a bilaterial below the knee and partial hand amputee after succumbing to an extremely rare, and often fatal, bacteria.

And so, when my surgery dates approached, I was ready. on November 19, 2017, I went for my first round of amputations – my feet bilaterally below the knees. And on January 23, 2018, the upper digits of both my left and right hands were amputated.

I was not born with a disability. I was born able bodied and went through a radical physical transformation. Before my transformation, I was working with the Dufferin Peel Catholic District School Board as an elementary school teacher and lived independently in Toronto’s west end. I was able bodied, energetic and free. All of a sudden, my life was paused. My body, which was once a strong and capable machine, became weak and dependent on others. In some ways, I had regressed to a state of infancy. I had to integrate into a world that was not made for people with disabilities.

After my illness, I realized that in our world, ableism is an unchecked problem and was amazed at all of the structural barriers I encountered without my fingers and feet, or with a body that struggles to stand upright or bend down. Stairs, doorknobs, zippers and buttons, electrical sockets that are close to the floor, packaging and lids, and even the thin roll of toilet paper found in public washrooms that are sometimes too hard to pull apart, all require an insane amount of effort at times.

It became evident that most spaces have yet to reflect the principles of universal design; a powerful concept which drives  the notion that “what’s good for one is good for all” by ensuring that all spaces are barrier free.

If someone can build a house on a floating raft in freezing temperatures or a whole castle against the frigid wind, then someone can surely build a ramp —to code —to make these spaces more accessible.

Since I moved to Yellowknife last fall, following my partner north after he landed a good job, I’ve discovered the wilderness and harsh Arctic climate make striving for the ideal of accessibility and universal design even more challenging. There is no circumventing Franklin Street’s hill, the icy parts of the sidewalk or the uneven, melted layers of snow that become a serious tripping hazard for me, and many others, in the springtime. Despite being a smaller city, Yellowknife has great infrastructure and many businesses that have been around for years could seize the opportunity to work towards making their spaces more accessible.

Take Old Town for example. A handful of eclectic stores with outstanding reputations exist there. I have been in these stores and have thought, ‘Why aren’t they more accessible?’ If someone can build a house on a floating raft in freezing temperatures or a whole castle against the frigid wind, then someone can surely build a ramp —to code —to make these spaces more accessible. Or at least, shop owners can create designated accessible parking spots and ensure their steps and lots are well graveled.

Old Town and its houseboats are not the only things that make this city unique. For a city with close to 20,000 people, there are a surprising number of events being offered all year round. From festivals to free workshops, burlesque shows and trivia nights, there is always something to do in YK. But your options become severely limited if you have a disability.

These problems are not unique to the North. The marginalization of people with disabilities happens everywhere, but up here accessibility legislation is lacking. There is no formal accessibility act, unlike most provinces in Canada. In Ontario, for example, the Accessibility for Ontarians with Disability Act exists to protect the rights of individuals with disabilities by creating standards and regulations through various policies at the provincial level. The AODA acts as a guide for both persons with and without disabilities.

Yellowknife is a diverse and lively city with programs created like “Ladies Only Swim Nights” to help accommodate women of the Islamic faith, and paneled discussions entitled “Decolonizing the Media.” This is no backwater. There is momentum here. Surely an accessibility act would reflect the community’s desire for growth and inclusion?

Still, the wild persists. It is nature that continues to test the resiliency and resourcefulness of all individuals. This is still a place that makes you realize that zipping up your coat can take you up to five minutes – and walking up and down the Old Town hill can seem like a trek to Mt. Everest. This community defiantly sits in the subarctic taiga, on the edge of a landmass that makes you wonder, “What is Canada and who can really own this land?”

For people with physical disabilities, that is also a question we face wherever we go. Across Canada, we – and many others – are faced with the question of belonging. Where do I and how can I belong despite encountering spaces that say, “You cannot enter” or “You may enter, but at your own discomfort.”

A friend recently told me, “You’ve been frostbitten,” meaning that the North has nipped my heels the way a sun dog seems to stop people from going about their business, asking them to slow down and enjoy the meteorological phenomenon. And yes, I have been nipped, despite my grievances. It happened the moment I stepped foot out of the airport and was met by the dry arid air.

At first, I came as a tourist. But after several months of flying back and forth from Toronto, I started to realize that the North was a place where I could find deep healing. This was a space full of fresh expansiveness and rawness; a great beauty and undeniable trauma seem to co-exist here. You cannot ignore one and only live with the other. The wilderness will always find a way to give you the reality check or healing you need, even if it is for a moment.

On Dene land, one can be mesmerized by the dancing fluorescent photons, or take a peek beneath the crevices of the cracking ice under the circumpolar sky. My hope is that someday soon, all individuals can experience that feeling of being reunited with the profound when they come to this land, regardless of their ability.

a woman walks on

with all the other 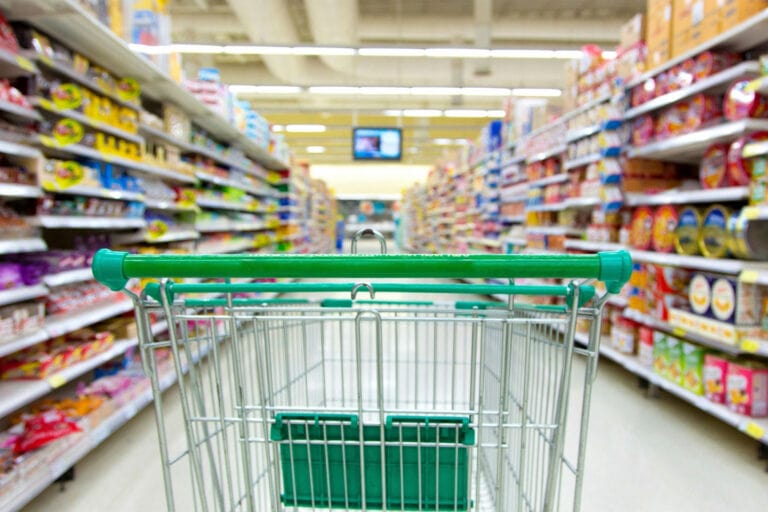 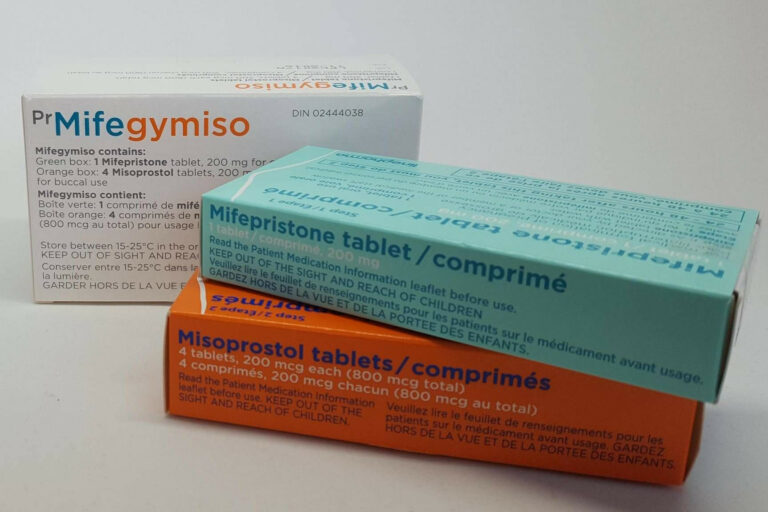 Opinion: The GNWT Must Remove All Barriers to the Abortion Pill

by Candice Lys and Sandeep Prasad