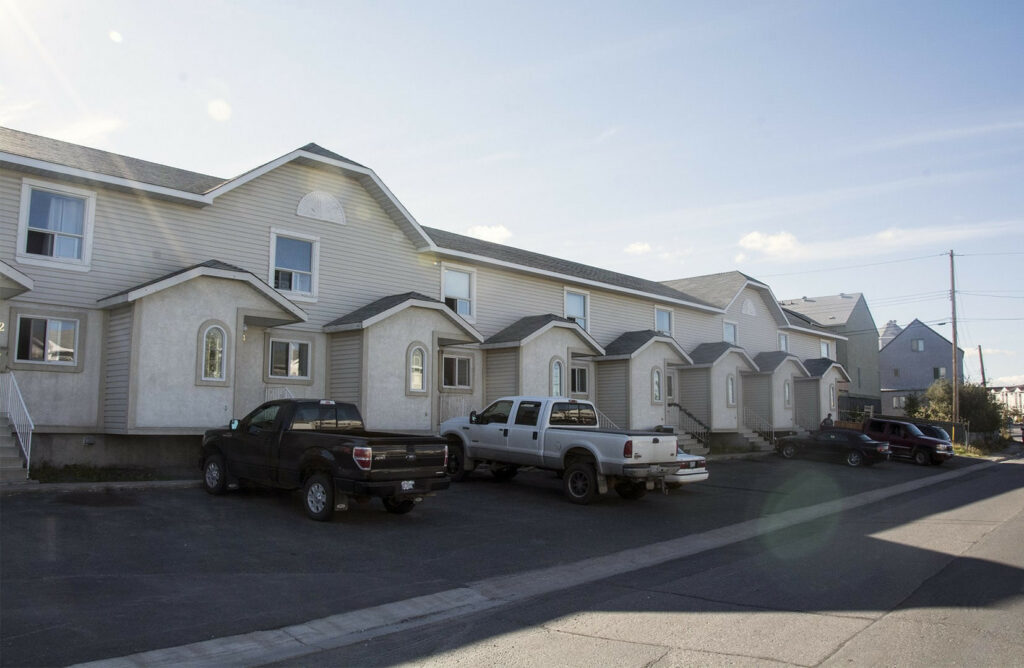 The suddenly expensive townhouses in question

Rosalyn Snow-McIsaac was already planning to move when a letter arrived saying the rent on her townhouse was going from $2,500 a month to $3,600.

“If we didn’t find a place already, we would not be able to afford it,” says Snow-McIsaac. “I’m a server, my husband is a construction worker, it’s definitely out of our price range.”

The 44 percent* rental spike on the three-bedroom townhouse in the Frame Lake suburb quickly caused a buzz on YK social media following a post on Facebook on Monday from Snow-McIsaac’s brother-in-law Jason Perrino, the owner of Twist restaurant. Comments — 52 and counting — came swift and aghast. ‘Is that even legal?’ was a common refrain.

The whole scenario, and the ensuing outrage on social media, highlights the fact that there’s nothing in the NWT to prevent landlords from raising rent as much as they like, for whatever business ends they deem appropriate

EDGE decided to ask around, and the short answer is: yes.

The NWT Residential Tenancies Act says that landlords cannot raise rent on a property more than once a year, but it doesn’t set a limit on how large an increase can be. Thirty percent, 70 percent, 200 percent — the sky’s the limit.

Landlords, however, are prevented from raising rent to force tenants out only to then drop the price back down once they’ve vacated. If a tenant decides to leave following a rent increase notice — and they have the right to do so within 90 days, regardless of the length of their lease — the landlord must show the price-increase letter to the next person wanting to move in.

What happens if no one moves in following the price increase? How long until the landlord can drop the price? The act is silent on the issue.

“I am making some changes to the building that require six units to be vacated,” explained Sam Gamble, the managing director of CloudWorks**, who took over the management of the property at the beginning of August.

He was reluctant to go into more detail about the move — “We’re really just in the beginning of the process and it’s not appropriate for me to be talking to tenants through the press” — but he did say that his company was putting aside $50,000 “to help the affected tenants in their transition.”

It seems clear then that Gamble expects all of the tenants to move out following the rent increase — in other words, he isn’t actually hoping to haul in $6,600 a month more from the property, at least in the short term. Perhaps the landlord plans to turn the units into luxury spaces worth $3,600? Perhaps it plans to turn them into condos and sell them?

Whatever the case, the whole scenario, and the ensuing outrage on social media, highlights the fact that there’s nothing in the NWT to prevent landlords from raising rent as much as they like, for whatever business ends they deem appropriate.

Rent controls have been debated for years, but the idea of capping the amount a landlord can raise their rents has never gained much traction with the GNWT.

According to a “What We Learned” document the GNWT put together following consultations in 2012, “It was suggested that measures should be put in place that would protect tenants from extreme rental increases of 20% and higher. Another suggestion was to have landlords who require increases of 20% or more to file a report to show that utilities and/or extensive renovations have increased a landlord’s expenses to a level that requires the requested rent increase.”

“Other approaches suggested… were adding a provision to the RTA which would allow for the Rental Officer to have authority to consider and rule on the amount of a rental increase when it is appealed by a tenant, and to set out a specific annual rental increase percentage in the regulations,” the document continues.

None of these ideas made it into the updated Residential Tenancies Act, which was most recently amended in 2015. Why?

One answer came from former MLA Wendy Bisaro in the legislative assembly back in 2012.

“Every indication is that rent control as a way of dealing with excessive rental increases would be expensive to implement and administer, and the negative aspects could well outweigh the positive by a large measure…. Research in the experience of other jurisdictions suggests that rent controls could divert resources away from the provision of housing and could even contribute to existing housing problems.”

“That may be so,” she went on to say, “but the Justice Minister needs to revisit this issue and consider potential solutions.”

Whether or not “potential solutions” were sufficiently explored since 2012 remains to be seen.  With the act being amended last year, it’s not likely to be reviewed again for some time. Until then, 44 percent spikes, rare as they are, are not illegal — all while the price of rent across Yellowknife continues its upward climb.

*An earlier version of this story incorrectly stated the percentage increase.

* Full disclosure: EDGE and its owners Verge Communications are currently tenants of Cloudworks, and Sam Gamble has contributed as a writer to the website.