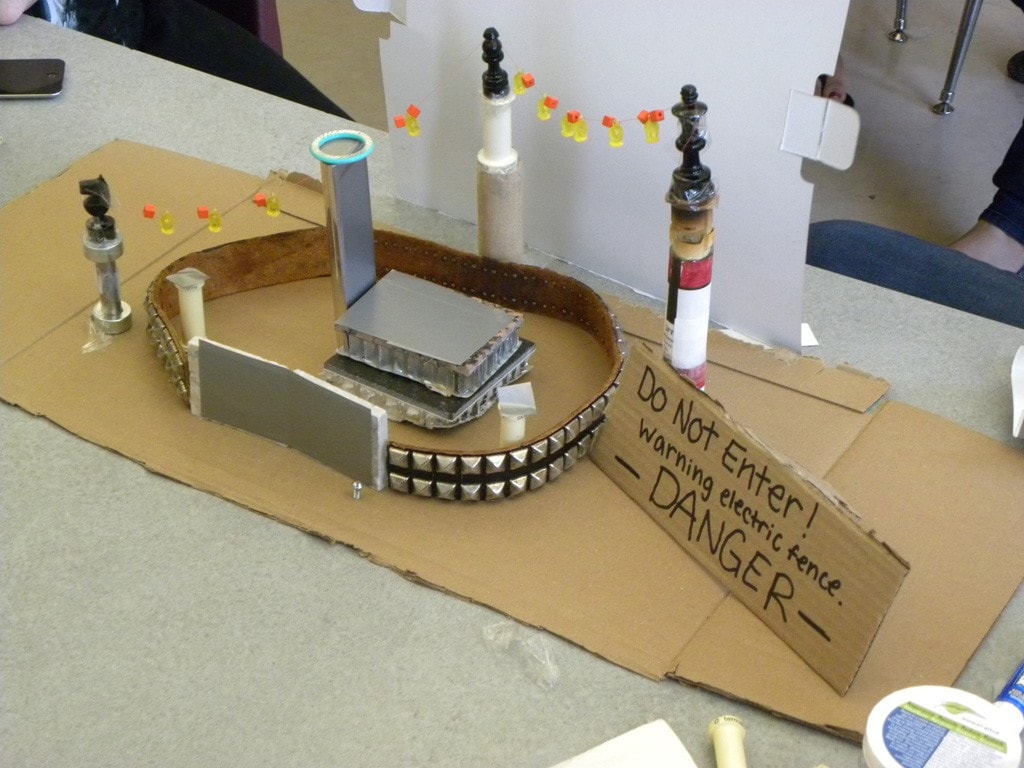 In June, we brought a box of random building materials—from carpet scraps to blocks to chess pieces—to Yellowknife and asked groups of local youth to construct models for warning systems at Giant Mine. We held these “speculative design” workshops with youth in Dettah (at the Chief Drygeese Centre and Kaw Tay Whee Elementary) and with Grade 11 students at St. Patrick’s High School in Yellowknife. The purpose was not to literally model the site, but for the youth to use the activity as a way to think about the challenges of managing a toxic site in perpetuity. The results were quite varied and incredibly imaginative. Youth built landscapes ranging from completely fortified enclosures to a theme park with a zip wire. In all, four main themes came out of the many examples we saw.

This model from a St. Pat’s student embodies all of them: 1. Containment: Given the arsenic is forecast to remain underground, most builders included some form of containment, ensuring the arsenic remained secure and on site. By and large, containment and exclusion went hand in hand: fencing of various types, whether walls, electrified barriers, or moats, aimed to exclude unwary and/or unwanted folks from the site. Some presence of humans (in the form of technical personnel or security) was often incorporated, and some models included information centres and messaging outside the perimeter.

2. Surveillance: In addition to containment and exclusion, surveillance was a surprisingly common element of these models. Guard towers with domed observation decks, cameras, and other forms of site surveillance (outwardly or inwardly directed) were often included. But we could ask ourselves: who’s watching the watchers?

3. Messaging: Participants made signs of various kinds, but there were few examples of various “levels” of messaging, the question of language, or other forms of communication. There were a few examples (using chess men or little figures) of using totemic figures (sort of like gargoyles) to warn people from the site. Mainly, there were signs–lots of signs, mainly aimed at supporting the mission of containment/exclusion.

4. Remediation and use: There was a range of forecast land use goals envisioned or implied. One Dettah youth focussed on leaving the site “ugly” and unusable, to keep people away from the danger and to commemorate the site’s legacy. Most models seemed to track a kind of middle ground on end land use, with contaminated areas not being really used at all, but some areas subject to remediation for future use. 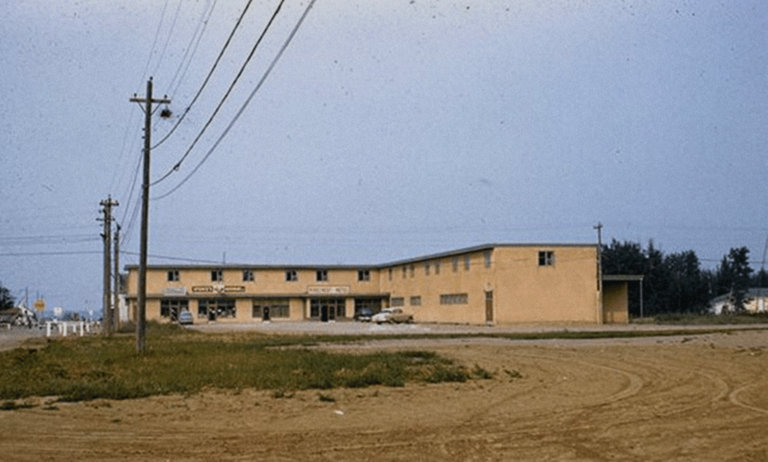 Drink Up, Dress Up: The Glory Days of the Pinecrest Hotel