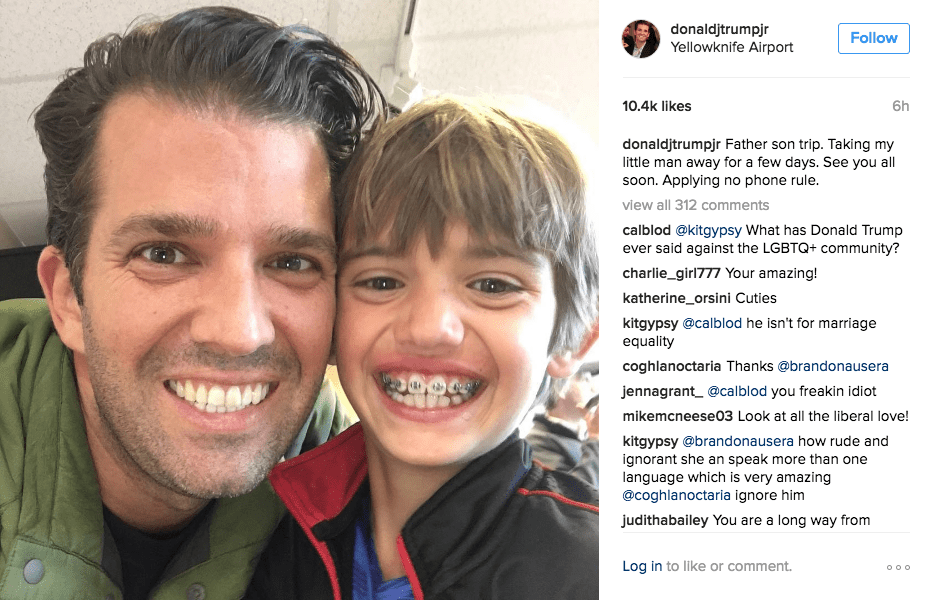 At some point yesterday morning, did you feel the urge to build a wall across the highway to keep out all those job stealin’, drug-takin’ Edmontonians? Did you briefly consider kicking a baby out of a crowded room, or maybe insulting the parents of a dead hero soldier?

You too, eh? Might have been the faint whiff of Trump in the air, as the son and namesake of the world’s current Worst Human Being checked in at the Yellowknife airport.

We can’t confirm much about his Northern adventures at this point — only that around 9 A.M. Thursday morning, Donald Trump Jr., a controversial figure in his own right, posted a pic on Instagram tagged at the Yellowknife Airport.

The 38-year-old, an executive vice president at his pop’s Trump Organization and noted big-game enthusiast, appears to be up here on vacation with his son. Cathie Bolstad, executive director of NWT Tourism, hadn’t heard much, though her team had already responded to him on Instagram urging him to use #SpectacularNWT

BOLSTAD (Laughing): “You think we’d get a tip off on something like this?! We got knowledge of it when it was on Instagram. But when you see something like that, it’s immediately: ‘how can we leverage that for Spectacular NWT?”

Our best, totally uninformed guess is that he’s on a fishing trip at one of the territory’s more upscale lodges, though the manager of the royally sanctioned Blatchford Lake Lodge said she hadn’t heard anything about a certain Mr. Trump, and we couldn’t get through to Plummer’s Lodge, which once hosted former president George H.W. Bush. It isn’t even Trump Jr.’s first visit to the great Canadian North; last time he appears to have enjoyed some classic Yukon wilderness fun: There is, of course, the chance that he’s still in Yellowknife. There haven’t been any sightings on social media. But the possibility, along with another rumour that Trump the Younger is travelling with the Bush twins, Barbara and Jenna Bush (daughters of W.), was enough to send us on a TMZ-style romp around town looking for motorcades. We took our editorial intern with us, because she had to learn about real journalism someday. Where would a classy guy like Donald Jr. hang in Yellowknife, we wondered?

EDGE: “Is it possible that Donald Trump’s son might have used your limo service?”

IAN HENDERSON (manager of Arctic Executive Limousine): “Nope, not that I know of.”

EDGE: “And are you the manager of Arctic Limos? Are you sure?”

We head to the Explorer Hotel, where a relatively-swanky looking black Chevy Impala, rented from National, is parked in the parking lot. Nice, but not too nice to be conspicuous — a good undercover car, we agree, peeking through the windows to no sign of Trump or either Bush twin. Inside the hotel’s restaurant, the servers haven’t heard anything… though they wouldn’t tell us anyway, they tell us. Down the hall at the Trapline: only middle-aged folks enjoying their late-afternoon drinks. No hair gel in sight. Everybody’s hands look normal-sized.

A guy working the front desk, who asked not to be named, confirmed he’d also heard the rumour. Finally, a hit! But no, no sign of Donald Jr., his entourage, or the telltale detail of earpiece-and-wraparound-sunglass-bedecked muscle-heads.

“When we had Trudeau here, there was a big security detail. We haven’t seen anything like this today,” our anonymous front-desk man says, with no discernable winks and nudges. He did add, however, that someone of Trump Jr.’s stature could be travelling in a pseudonymously low-key manner, before concluding that he was probably already off at a lodge.

Hmm, so where else to find a Trump or a Bush in a town like this? Perhaps drinking in the view from the top of Pilot’s monument?

On the way down we pop into Just Furs, on the off chance Junior was buying a Linx hat for his next jaunt to Moscow avec papa to spend time with everyone’s second-favourite demagogue.

GIRL AT FUR COUNTER: “I wouldn’t have recognized him. And why would he come to Yellowknife?!”

GUY AT FUR STORE (pulling up a pic of Jr. on his phone): “Probably fishin’ at a lodge or something?”

Heading up Pilot’s Monument we see a sweaty runner, and a brace of tourists, but alas, no Trump and no Bush, not even one. As we stand at the top of the hill, the city below us in all its glory, we can agree that YK, YK, it’s a hell of a town, but as paparazzi, we suck. No bright, disorienting flashbulbs, no aggressive videographers, no real killer instinct. We’ve been trumped. Back to the Instagram account.

– with files from Oriena Vuong