Wind farms, machines that morph compost into propane, large-scale wood-pellet boilers fed by recycled cardboard – soaring energy costs are forcing the City to dream big as it updates its energy plan for the first time in a decade.

Since the Community Energy Plan was introduced in 2004, the City has reduced its greenhouse gas emissions by 20 per cent and is saving $500,000 a year on energy costs, according to administration. But with the cost of heating and electricity expected to rise steeply in the coming years, both the City’s environmental footprint and budget are at stake as the plan is overhauled over the coming year.

Since 2005, the cost of heating oil has increased by 90 per cent. At projected inflation rates, the annual cost of keeping City infrastructure heated and lit will increase from roughly $4.8 million in 2013 to around $8.4 million by 2025, if nothing is done.

According to an internal “Vision for Renewable Energy” that’s guiding the energy plan update, if the City invests in a wide range of projects like solar power, more LEDs and a biodigestor that turns organic waste into fuel, that number could be kept down to around $7 million. You can find info on the planning process here.

Larger projects, like a wind farm or a paper and plastic waste-to-energy system, are needed to hit a lower target of around $5.8 million a year.

What’s to be done?

The biggest cost saver and emissions reducer being considered is a large biomass pellet boiler that will heat the Fieldhouse, Multiplex and five other buildings, said Remi Gervais, the City’s Energy Coordinator.

The City currently burns 450,000 litres of oil a year to heat the seven buildings.

Once the $1.9 million project, expected to begin in 2016, is installed along with a pellet boiler in the water treatment plant, the City’s annual emissions will drop by 1,480 tonnes of CO2, roughly 29 per cent of total emissions. As pellets are cheaper than oil, the cost is also expected to plummet, said Gervais.

There’s also a chance the increased amount of biomass being consumed by the new boiler may justify investing in a “briquetting plant” that turns cardboard, waste wood and plastic into bricks to be burnt in the boiler, further reducing the cost.

Administration has done a pre-feasibility study on the plant, said Gervais, and the technology is there. It remains to be seen whether it would be cost-effective.

Beyond pellet boilers and the possible briquetting plant, two other large-scale projects have been proposed: a wind farm and a biodigestor that would turn compost into propane. Both are tentative ideas and come with significant price tags: $21 million for the wind farm and $3 million for the biodigestor. Yet they could provide significant benefits, if the City can find a way to fund them either through federal and territorial contributions or a public-private partnership, said Gervais.

The 6 MW wind farm, proposed in the vision document, would produce a significant amount of the city’s energy at a much lower rate than currently available from Northland Utilities.

“The lowest range of wind cost is three cents a kilowatt, so being under 18 cents is not hard to beat,” said Gervais.

Because Yellowknife is already electrified mostly by hydro, this wouldn’t necessarily affect emissions. It could, however, reduce the amount of diesel needed to maintain power levels when there’s low water at the hydro dams, like what happened this summer. And it could make fuel for electric cars much cheaper, should the City decide to begin electrifying its fleet of 150 vehicles in the coming years.

“If we can produce our own power at lower than 18 cents a kilowatt, which is the commercial rate right now, then the fuel for that electric car is also much cheaper,” said Gervais.

Using only vegetable oil and food waste, “a biodigestor could produce enough gas to heat the baling facility and generate 1.97 million kWh or 17 per cent of the City’s power use,” and reduce the tonnage of food wasted in Yellowknife by 70 per cent.

“What we need is that source of organic waste, that means we would need to go to a full city-wide organic waste separation,” said Gervais.

Along with the big-ticket items, the vision document suggests the City starts reaching out to Yellowknifers to encourage them to save energy.

By itself, there’s no way the City can reach its “long-term goal” of having municipal operations carbon-neutral by 2025 – it’s simply not economical to stop using all fossil fuels. However, by running projects that encourage community members to save energy, the City can get carbon credits.

The principal way of encouraging a shift in energy consumption that’s being discussed is a “green financing initiative.”

The idea is to prompt people to invest in pellet stoves, solar panels and better insulation by offering low-interest loans. The City can borrow money at more favourable rates than most individual property owners, so they’d simply repackage those loans to people interested in green renovations.

The subsidized rates are still being worked out, but a similar project that just started in Toronto offers loans of up to five per cent of the value of a property at a fixed interest rate of 2.5 per cent over five years. Not a bad deal considering interest rates on home improvement loans are often two or three times higher.

Pembina Institute is currently investigating the financing plan, and according to Gervais, it’s likely the City, or a partner like the Arctic Energy Alliance, would also offer people advice on the renovations and help them secure contractors. 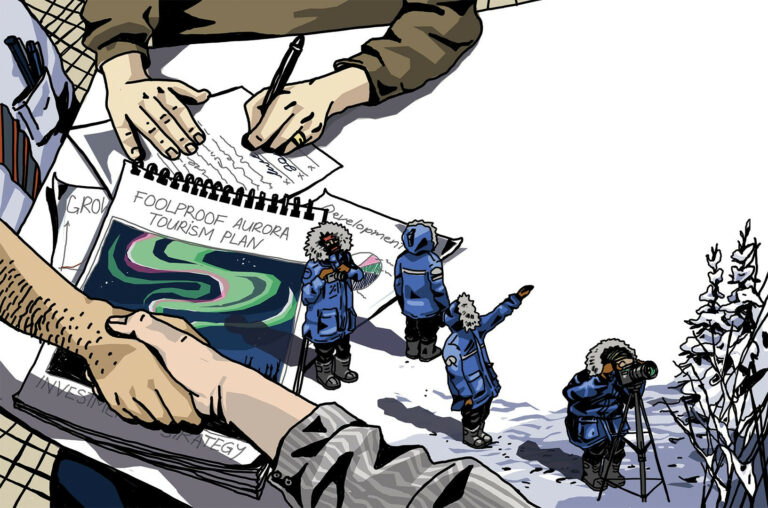 Into the wild blue yonder with aurora tourism