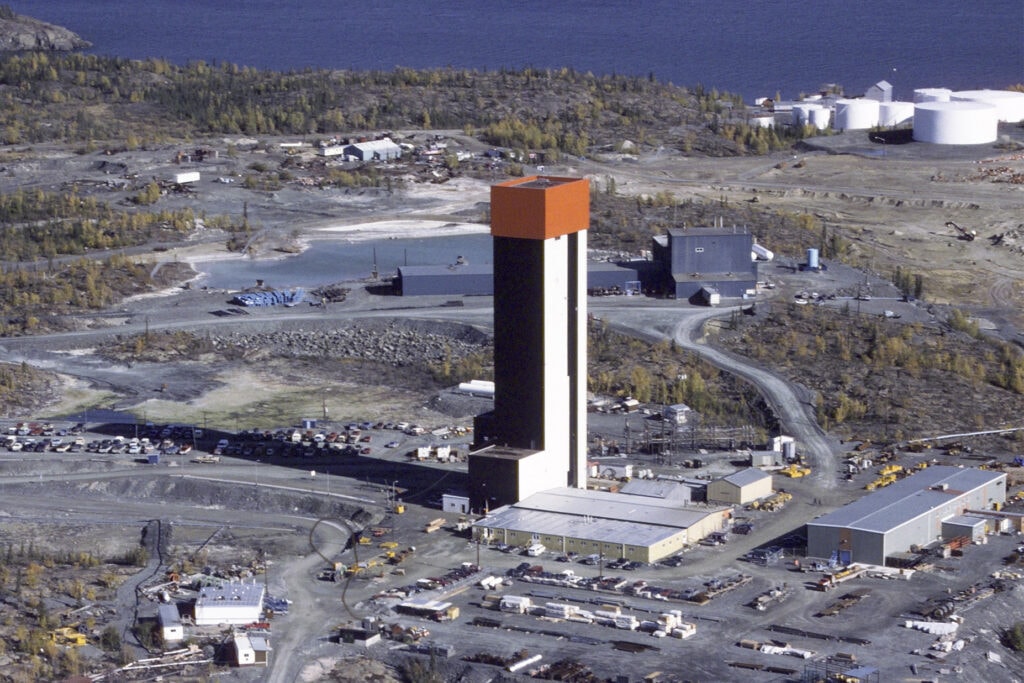 Yellowknife's Con Mine with its Robertson headframe. NWT Archives/©GNWT. Dept of Public Works and Services/G-1995-001: 2825

There was a week that winter that got real cold, so cold you could toss a glass of water up and watch it vaporize and freeze. You had to be careful if you were exerting yourself outside as you could scorch your lungs – freeze the tissue in your breathing cavity. An upside to it being that clear and frigid was seeing the northern lights sometimes.

My oil space heater was doing the job but one night I awoke to a bonfire in the middle of my cabin. I had turned up the oil drip too high and it was really doing the job. Luckily, I was thinking and cut off the feed from the tank as there was already oil dripping onto the floor. I remember there was ice fog on Latham Island that week and there was an other-worldly look to the place. I saw a sun dog, a ring around the sun colored by the light spectrum.

My neighbours the Baileys, who ran the Pentecostal Church and mission down on Latham Island, were visited often by a young missionary named Peter. He was in his early twenties and worked at the Pentecostal Church in Behchoko, which was then known as Fort Rae. Despite our lack of common religious beliefs, we hit it off, both being from Ontario. The Baileys were his heroes and he helped them out with chores whenever he was around. And I helped them whenever I could too, doing what needed to be done, as I was pretty handy. I used their shower and many times I sat at their dinner table as they served the humblest of meals for whoever showed up.

In the new year Peter parked his International Harvester Travelall truck/van in my yard for a couple of months and flew back to Ontario. He was to meet up with his sweetheart whom he was planning to marry, an arranged union through his church. She would become the wife of a missionary and at some point come up north to see what it was like before they tied the knot. It was a formal and proper courtship as they were both devout Christians.

At that time, the Baileys were putting up a mom and her twelve-year-old boy Johnny from the High Arctic. The moment I saw him I knew he was trouble, having been a high-spirited child myself. I’d heard that traditional Inuit have a custom of letting children have as much free rein as possible as their life would become very hard as adults. But he was real loudmouthed and sassy and if he wandered over to my place I chased him away. The mother had her own problems and had no control over him. So, when the Baileys’ cat disappeared I personally thought Johnny had something to do with it.

But he denied knowing anything about it and that was the end of that…for a while. When Peter came back in the spring and opened his truck up the smell of death filled the air. Someone had gotten into the truck and locked the cat in the glove compartment and when it warmed up outside the mess went to maggots. I had seen Johnny inside the truck at one point and rousted him out so I had my suspicions. Someone had put the cat there, but the culprit was never found. Johnny and his mom were long gone by then.

One of the men at the mission was always playing jokes on people and he caught me in a good one that had ramifications for a few years. He told me very excitedly one day that there was a litter of real sled dog pups and that I could have one if I hurried. I agreed and later he brought me a pup. They all look the same when they are young and I now had a dog. But that animal turned out to be no sled dog; it was a smallish terrier type. She was always shaking so I called her Shaker and I had that dog for a few years but never really bonded with it, finally giving her away to a lady in Parksville, B.C.

I was looking for work in late winter and found my job working in a gold mine, Cominco, known as Con Mine. Gold mining was the biggest employer in town (along with the territorial government) but had its ups and downs as a resource. The price of gold was rising, and I think it went up from forty to one hundred dollars a troy ounce over my tenure there.

They asked me in the job application if I wanted to work underground, which paid more for danger but was not for everyone. I preferred not to, and got hired to work in the assay office. My favorite study in high school was geology so I was tickled pink. But my actual position was not so glamorous. I was the “bucker” and my job was pulverizing rock core samples into a fine powder. I had my own shop beside the assay office equipped with some crushing machines and a bench.

My time was spent making rock powder and then cleaning my always dusty shop. The raw core samples were delivered to me from underground and I would pound the cores to a powder with my loud crusher, label them and take them to the scientists next door for their analysis. I had full rein in the bucking room and could play loud music if I wanted which was handy if I had nothing to do. No one bothered the bucker as I was always making rock dust and noise. I also got to hang out at the assay office and watch them work. I was pretty much their step and fetch it. But it was interesting working with the geologists and seeing their processes.

Once every two weeks I had a different job… the gold brick polisher. After all the processing in the mill they eventually came up with a refined powder that they would smelt into gold bricks in a building called the pouring shed. I think the ratio was one ton of ore to get one ounce of gold. I was stationed in a small room in that shed separated from the blast furnace with a concrete sink and water flowing in it. They brought the cooled molten brick in the mould and dropped it in the sink. Water was run onto it and the brick would spit out from the mould.

My job was to polish it with a wire brush on a power drill. There was a screen in the drain hole of the sink where little flecks of gold would accumulate. At that time, they didn’t seem concerned about the little pieces and I recall sending a small piece to my Grandpa Ralph Smith that would be worth a hell of a lot more money today. As I write this gold is $1,200 an ounce and I can imagine the security involved in a gold mine nowadays.

Before I got the job at Con mine there was a heist of some gold bricks there. The RCMP would pick up the finished bricks in a car and deliver them to the airport. They stopped for a coffee on the way whereupon the crooks deviously stole the police vehicle. But they weren’t very smart as there are only two quick ways to get the gold out of town, by driving or flying. They chose to try and fly it out on a commercial flight and got caught as the containers they shipped it in were way too heavy.

When the weather was good I worked outside at the mine with a young scientist from the University of Alberta whose job was to find something that would grow in the dry tailings ponds out back of the mill, a grey forbidden zone full of ultra toxic leftovers. It was like driving around on the moon, a plot of land that the mining establishment didn’t want the public to see. But it was a pleasant job nonetheless and I could ask questions and follow the research. He was gene splicing trees to come up with something that would grow in extreme acidic conditions as the ponds contain cyanide amongst other killer chemicals. So, the idea was to create a lemon-type, extreme-acidic-soil-loving tree that could survive minus forty in the winter.

As always, we come back to Nature to repair our messes. But that said, gold is a very important metal for us in ways other than vanity or treasures. It has scientific purposes as well, being the best electrical conductor we know of.

We need it but it’s messy to get. Sadly, I hear that they are still cleaning up at Con and at Giant, both mines in Yellowknife that are now depleted and closed. No end is in sight.

This is the fourth installment in Glenn Smith’s series Those ‘70s Stories, based on a youthful adventure to the North after leaving his hometown of Toronto. He lives in Vancouver now. 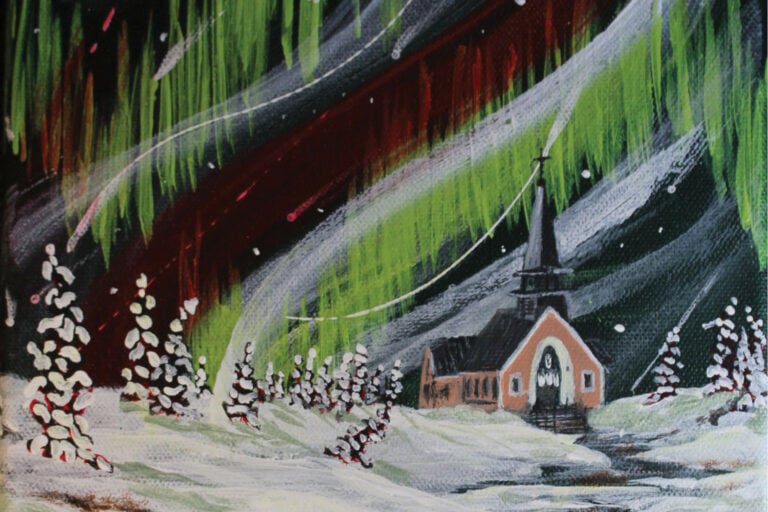