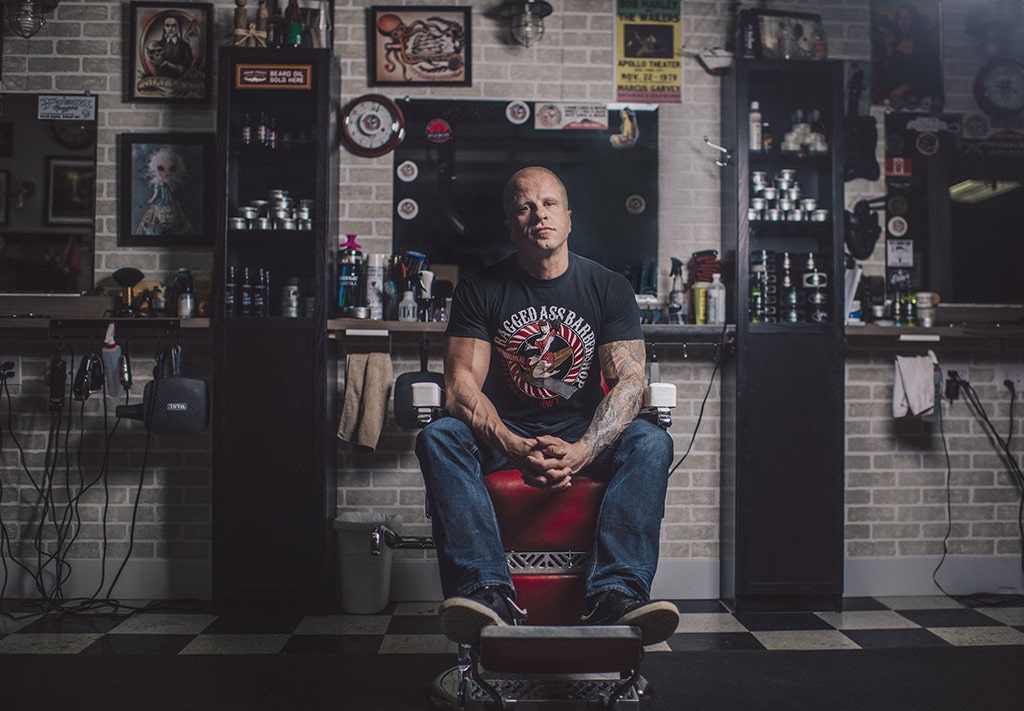 While Mona Lisa smokes a joint on the far wall, Jimmy “da Barber” McGaughey tells EDGE that much of the décor of Ragged Ass Barbers isn’t so much about projecting a single image, but a mish-mash of everyone there – from owners to staff to clientele. “That fish there, somebody, their wife wouldn’t allow them to have it in the house, so they brought it here,” he says – with a purple sucker pulled from a bucket next to the till popped into his mouth. “They’re here every other week anyways, so this way they can still look at it.”

The man-cave-esque atmosphere, he says, is intentional, though they do have female customers. “We wanted to do a men’s barber shop, and just something a little less stuffy than what we’d been used to,” says McGaughey, who co-owns the operation with partner Steve Payne. “It’s something to contradict the salon. A lot of times, salons tend to be a little intimidating for men because they’re very feminine, or try to be anyways.”

The atmosphere at Ragged Ass is somewhere closer to a tattoo parlour than a traditional barber shop, but between McGaughey and Payne, he counts about 50 years of experience in the hair industry.

For McGaughey, the jump into hairdressing was a fluke. “I was a father-to-be at 17 years old and I needed to figure out a way to support a family and I had nine months to do it – the course was nine months long,” he says. “I was licensed a week after my daughter was born and it’s been good to me ever since. I can’t see myself doing anything else.”

McGaughey moved up to Yellowknife from Regina when his friend (and former co-owner of Ragged Ass) spotted a shop for sale while in town filling a chair at another salon. “I ended up coming up, checking it out, and it ended up happening,” he says.

When asked, McGaughey is hesitant to go into detail about the departure of his friend and former business partner, which left the shop to himself and Payne. “It was a hiccup but we got over it real quick,” he says.

This year has also been a hard one for him, including a divorce, though he says he and his ex-wife are still good friends. “It’s a big adjustment, at 41 years old becoming single when you haven’t been single since you were 24,” he says. “That’s a big change. It may not seem like it is, but it’s definitely a big change.”

When asked for a personal philosophy that gets him through, McGaughey delivers this: “It doesn’t matter what life throws at you, you’re always going to bounce back, even if you don’t think you’re going to.”

Similar, mostly upbeat phrases of perseverance and determination are among the nuggets of his personality McGaughey shares over his various social media channels. He says he’s comfortable with revealing that more sensitive side of himself. “I don’t know, that’s just me,” he says – and references his philanthropic efforts in the Dominican Republic, where he sponsors a family. He recently built a home for them and bought them a juice business. This year, he hopes to raise enough money to pay for health insurance for the family, including their three children.

“I kind of like to inspire people, somewhat,” he says. “I get a charge out of helping people, especially people that are poor, you know. There’s a lot of great people that live in countries that don’t have a chance. They don’t even have a chance which is really, really sad. So I have a soft spot for people like that.” In town, McGaughey also gives free haircuts at the homeless shelter once a month and along with Payne’s charitable efforts, the shop is well known for its contributions to the community.

And when it comes to business, being known is a good thing – other times, not so much. Recalling some memorable days in the shop – amid fist fights and giving late NDP leader Jack Layton a trim and shave – McGaughey laughs while bringing up the day a bylaw officer, recognizing his name, brought his summons for an unpaid parking ticket into the shop. “He threw down the summons,. No one in the shop knew what it was for,” he says. “I had to tell everyone what it was for, so they didn’t think I was a convicted rapist or anything… I was like, ‘It’s a parking ticket. If you have a warrant for my arrest, come down and arrest me but it’s a . Can’t you put it in my mailbox?”

Another story he recalls is a client’s wife standing over his shoulder directing him how to cut her husband’s hair – “I said you do it, or sit down and shut your mouth,” he laughs. A little rough around the edges, but a fit for the laid-back shop that McGaughey says has been his goal since his earlier years working for a hair care manufacturer. “Eventually, I wanted to be in my own place, doing my own thing. I did the corporate thing for a while and it definitely wasn’t my thing,” he laughs.

“I loved the work but I hated the bureaucratic bullshit that comes with it. I wasn’t cut out for the corporate thing; it was my skills they hired me for, not for my corporate attitude.”

I showed up here six years ago in October for Thanksgiving weekend and I thought it was pretty cool. There was a lot more here than I thought there would be.

The people. There are really great people here.

I get out of here as much as possible. That’s when I do a lot of my travelling, is in the winter.

I work lots and I like to do a lot of outdoors stuff: fishing, camping, all that good stuff.

What kind of opportunities did you find here that you wouldn’t find anywhere else?

The business opportunities up here, for anyone that wants to work her are pretty darn good. I think anybody that has a skill here can make a lot of money if you want to work. Skilled trade people here are the busiest people in town.