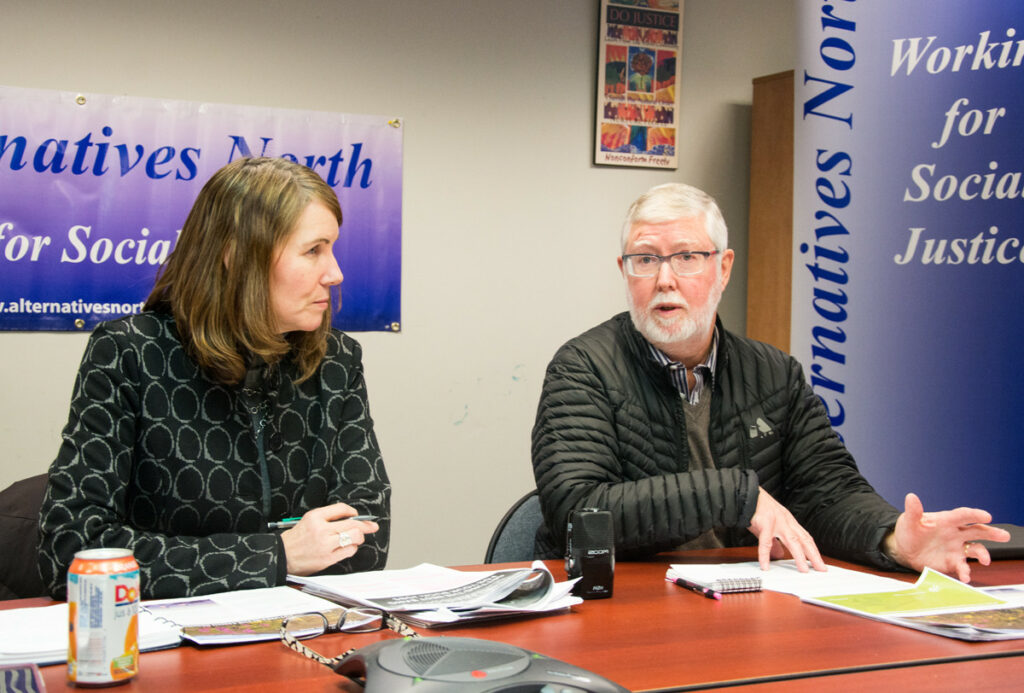 It’s hard to consume the news these days without being cowed by the increasingly dismal state of the economy. A global commodities rout is running roughshod over large swathes of Canada, particularly in the west. The Northwest Territories, reliant as it is (outside of government) on mining, exploration and their supporting service industries, is no exception.

As happens during commodity downturns, alternatives to the boom-and-bust cycles of our extractive economy begin to look increasingly appealing. Diversification, after all, was one of the most prominent words bandied around during last fall’s territorial election.

So the timing of a new Alternatives North report entitled “Economic Futures in the Sahtu” couldn’t be better for catching the ear of change-hungry politicians and GNWT mandarins. Authored by academics David Thompson and Diana Gibson, the report aligns with the prevailing diversification mood — as well as the anti-fracking sentiment that peaked this autumn with a petition to the legislative assembly signed by more than 1,000 NWT residents — to argue against oil and gas development in the Sahtu in favour of developing a range of small-scale industries.

Their central argument is compelling. According to the GNWT numbers they based the report on, oil and gas produces only 0.5 jobs per $1 million spent, compared to 23.4 jobs in forestry or 15.9 jobs in fishing, hunting and trapping. Add to that the costs of environmental damage, instability based on global prices and potentially harmful impacts on communities’ health and social outcomes, and oil and gas looks like a pretty poor thing for the GNWT to throw subsidies at, let alone dash around promoting (not that there’s much promoting going on these days given the price of fossil fuels).

“One of the most important things that we saw in the data from experiences elsewhere was a study looking at almost 400 rural counties in the U.S. where they found that incomes and unemployment in those communities were worse after the resource boom than if the boom had never happened,” said Gibson during a press conference following the report’s release.

Instead of extractive industries, the report argues that forestry, agriculture, tourism and renewable energy, amongst other options, provide better long-term hope not only for the Sahtu but for other regions in the territory plagued by chronic unemployment.

“The evidence on jobs is clear,” the report states. “The local sustainable economies approach delivers far better (up to 40 times better) on job creation per dollar invested… Oil and gas extraction has the lowest job multiplier of any industry (0.5 jobs per dollar), shedding serious doubt about the extent to which oil and gas extraction will create jobs for local populations in the Sahtu Region.”

The issue, however, isn’t as simple as the job multipliers, quoted extensively in the report, might suggest. One million dollars spent on forestry in the Sahtu isn’t the same as $1 million spent on forestry in the Deh Cho or the South Slave; each region’s transportation infrastructure, proximity to markets and available workforce is significantly different, as are the forest resources themselves.

The report points this out, albeit in a footnote. And Thompson readily admits that you have to take government multipliers “with a grain of salt.”

Still, this point could be easily missed in a rush to use the report to criticize oil and gas and inflate the potential of alternatives. The fact is that extractive industries in the North have the capacity to attract investment because the product is produced for export on an industrial scale to global markets; the same cannot realistically be said of any of the alternative industries, barring perhaps tourism, that are promoted in the report. Sure $1 million invested in Sahtu agriculture will produce more jobs than the same million invested in oil and gas; but how many millions in private capital are going to flow into an industry with relatively little possibility for financial return?

To this point, Gibson and Thompson offered three responses, each which is important to understand if the report is to be more than a sounding board for progressives looking to demonize the oil industry or a strawman for pro-industry folks to attack.

Even with these caveats, or perhaps because of them, the report raises far more questions than it answers. But this seems to be the point.

“This is not meant to be the be-all-and-end-all, it’s not a formula for success in each of these sectors,” said Gibson. “It’s really just meant to open the door to a more informed conversation.”

The report stops short of making a conclusive case against oil and gas development. But at the very least it brings together a wealth of data to dampen any bright-eyed and open-pursed enthusiasm about the industry on the part of the GNWT — which, it has to be said, has largely faded for the time being. Whether any of the alternatives it presents could be viable — well that’s for some clever bureaucrats, politicians and entrepreneurs to try and figure out, hopefully without dropping too much money on ill-conceived endeavors in the process.