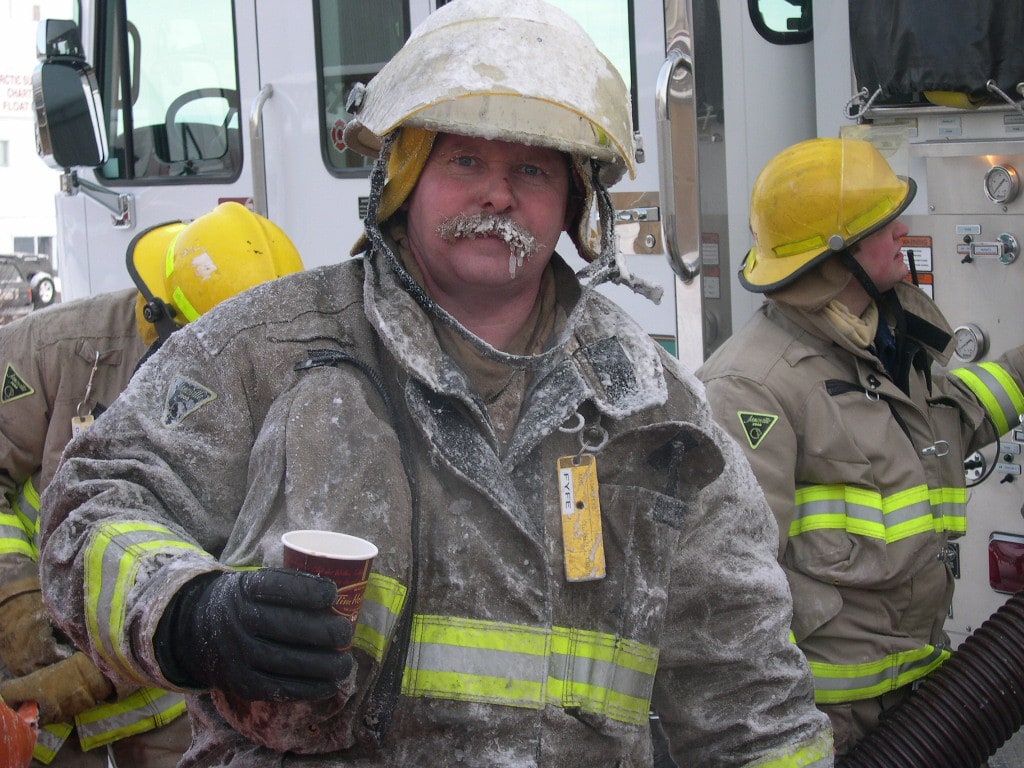 Kevin Olson had been on the force for less than two weeks; he hadn’t even received his first paycheck. He had only just moved to Yellowknife from Calgary, and had recently been married.

“It’s therapeutic to talk about it,” says Ed Hardy, an ex-firefighter who is now a safety officer with the WSCC. He started his career at the Yellowknife Fire Department only 18 months after Cyril.

He shares a side of Cyril that has perhaps been shrouded by the events that ended his life on March 21, 2005. “He had uniquely exotic pets; snakes, a parrot,” says Hardy. Sometimes, if Ed and Cyril were hanging out at Cyril’s place after work, they would hear the parrot. “We have these pagers with a unique high pitch tone, and the parrot would mimic it. You’d be sitting there thinking your pager’s going off and it’s just this parrot.”

Perhaps owing to his close proximity to the alarming parrot, Cyril had a habit of sleeping through his alarms. “It’d be sitting right beside his head squawking and he wouldn’t wake up,” says Hardy.

Ed and Cyril were the chefs in the fire hall; other firefighters — “brothers,” as Hardy refers to them — would bring ingredients and say “You’re making dinner.” Hardy still recalls Fyfe’s specialty. “He would fry pork chops and perogies in a cast iron pan, and cover them in this mushroom gravy.”

During tough economic periods, Fyfe worked other jobs. “He would do odd jobs, drive a cab,” said Hardy. But when it came down to it, Fyfe always knew that firefighting was his true calling. “He’d be there for life,” said Hardy.

To pass the time in the fire halls waiting for calls, the fire-fighting family would play jokes on each other. “One time we were making dinner, and got a call-out, and Darwin Rudkevitch took all the apples out of our still frozen apple pie, and replaced them with a bunch of sliced-up potatoes. We were all wondering what was wrong with this pie: ‘It has no flavour.’” The firefighters would also sometimes hotwire each other’s spark plugs, and hook them up to the seats, “so you’d get a shock when you started it.”

“It’s our way of dealing with the grief and the stress and the pressure.” The firefighters were called in at around 7 a.m. that morning, when word came through that there was a fire at the saw shop in the Home Building Centre on Old Airport Road.

Four firefighters went up on the roof, and, according the eyewitnesses at the time, were cutting holes in it. Cyril and Kevin were inside, and the roof collapsed on them, trapping them and leading to their asphyxiation. Kevin died on the scene, but Cyril passed away four days later in hospital. The firefighters that were on the roof made it out safely.

The Workplace Compensation Board brought up Darcy Hernblad (then-deputy fire chief, now fire chief), as well as then-fire chief Michael Beauchamp and the city on charges one year after the tragedy, alleging that they and the YKFD had failed to properly ensure the safety of the firefighters under their command.

That charge was stayed; the usual course of action when the Crown doesn’t feel it has enough evidence to proceed with the charge. A settlement was made out of court: the City of Yellowknife was ordered to pay $300,000 into a security fund to train senior fire officers, and Hernblad was ordered to undergo a competency test administered by an expert panel.

“This is a guaranteed outcome that will hopefully make it so that it doesn’t happen again,” said Christina Olson in a 2006 interview with NNSL, when the settlement occurred.

The WSCC indicated it was “very pleased,” with the changes made internally to the fire department’s policies and procedures since the tragedy. “We monitor them every six months, and we’re very pleased with what they’ve done,” said Dave Grundy, president and CEO of the WSCC.

“We have a very good fire service in this city, and when something happens, they’re on their own, they have to deal with it.”

Attempts by EDGEYK.com to contact current members of YKFD about their memories of the day, as well as the changes that have occurred internally were stymied by the City of Yellowknife’s directors of public safety and communications, Dennis Marchiori and Nalini Naidoo.

“From the City’s standpoint what we wanted was to have a remembrance of the two individuals who gave their lives doing the work they love,” said Marchiori. “It’s still raw,” he argued. “If it dredges up feelings in the past that don’t feel the best for them… it’s not an easy situation.”

Similarly, the office of the fire marshal declined to allow comment. “Even if it were to be a personal comment, you can’t remove his [fire marshall Chucker Dewar] comment’s from the context,” said MACA’s communications advisor, David Maguire.

The firefighters will have a small, private ceremony on the 17th for the 10 year anniversary of the tragedy, following their public ceremony at Cyril Fyfe’s gravesite at 3 p.m.

Looking For A Lawyer? Don’t Do ANYTHING Until You Read This Article.