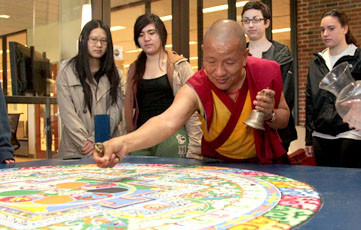 Over the next five days, Yellowknife will play host to the Venerable Tenzin Yignyen, a Tibetan monk ordained by the Dalai Lama, as part of the first Northern Lights Buddhist Meditation & Yoga Retreat.

The retreat, organized by Sylvie Boisclair of Do Something! Yoga, will offer a mix of yoga classes and lectures on spirituality. At the retreat’s core event, Yignyen will be creating a sand mandala over four days in the Champagne Room, above Bijou Boutique on Franklin Ave.

“The intention of the mandala is different than most western art,” Yignyen told EDGEYK.com from his home in New York. “The majority of western art teaches pride, ego, competition and jealousy. Mandala art teaches love, compassion, patience and discipline.”

The intricate pattern of coloured sand will be fairly small at roughly 4 x 4 feet, but the process is slow and labour-intensive. After a basic outline is drawn, sand is meticulously poured into place through a funnel. As the mandala takes shape, fanning out from the centre, each section comes to represent a different value: compassion, kindness, patience, etc.

“The mandala is a tool to teach moral values,” says Yignyen.

Yignyen was born in Tibet but his family fled across the border into India when he was two years old, after the Chinese occupation of that country in 1950. In 1969, he entered the Dalai Lama’s Namgyal Monastery in Dharamsala, where he studied for 16 years, eventually receiving the monastery’s highest degree, “Master of Sutra and Tantra.” Since 1995, he’s been living in New York, where he teaches Tibetan Studies at Hobart and William Smith Colleges.

For Yellowknifers interested in Tibetan Buddhism and non-western art, this isn’t an event to miss. Yignyen is a world expert in the ancient form of mandala creation. He visits dozens of cities every year to display his craft, and has constructed mandalas in places ranging from the Natural History Museum in Los Angeles to kindergarten classrooms in New York and the Thekcheling Monastery in Ulaanbaatar, Mongolia.

At the end of the retreat, the mandala will be destroyed and the sand will be ceremonially dispersed on the ice of Frame Lake, “to show that nothing is permanent, everything is a guest in this world, and nobody stays for ever,” says Yignyen.

From Saturday through Tuesday, he’ll be giving evening lectures on Tibetan Buddhism, and throughout the day Boisclair will be leading yoga classes. Each morning, people are invited to join him for a morning meditation starting at 8:30.

This will be Yignyen’s first visit to the North, so a warm welcome from a cold place is due. “Is there a lot of snow?” he asked from New York. “I hope my plane will still be able to land!”

For more on the schedule check out: sylvieboisclair.com