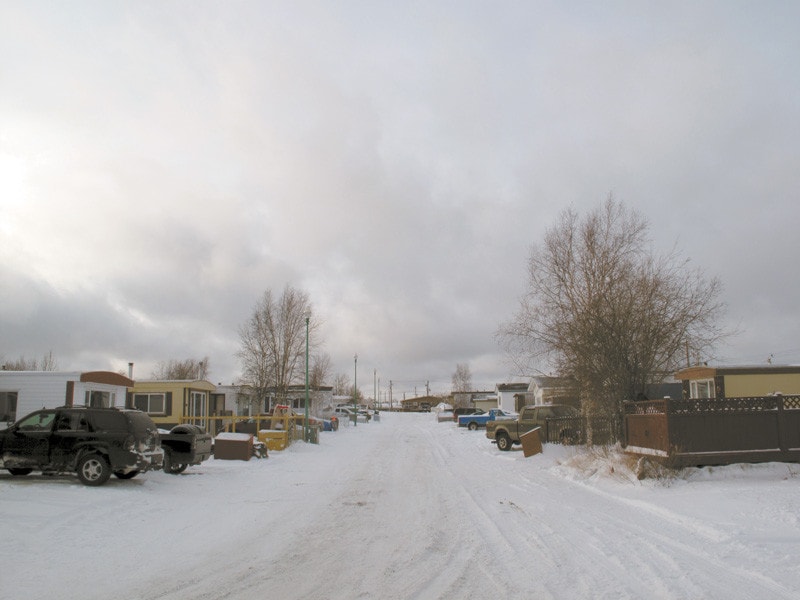 EDGE is taking some holiday time, from December 20 to January 4. While we’re off we’ll be re-running some of our favourite stories from the year, and some hits from our archives. Here’s a look from inside Northlands, at the height of its troubles back in December 2011:

Entering Northlands Trailer Park sometimes feels like crossing the border into a different, much poorer, country. Potholes immediately slam your car. There’s a good chance litter is blowing down the street from an overflowing garbage bin. And it’s not unusual to see a tarpaulin tacked onto a roof, scraps of lumber and metal used to construct a fence, or parts of an exterior wall missing, leaving insulation exposed to the elements.

It took me awhile to adjust to my surroundings after moving here in 2009, but now I enjoy the neighbourhood and all its clutter. Walking down the sidewalk-less streets is fun. The homes are packed so close that in some cases it’s almost possible to touch your neighbour’s trailer, and some people have only a few feet separating their front window from the road. I often end up making eye contact with drivers turning the corner near my house while in my living room drinking my morning coffee.

I also now like seeing how someone has mended a broken window with duct tape, how another person has stacked five car tires on their front lawn, and how someone else has placed a deep freeze at the end of their driveway and painted their house number on it.

Northlands is like this for a number of reasons. For one, the condominium corporation’s board is having trouble enacting a by-law that would permit fines for untidy yards. Another reason could be socio-economic. According to the NWT Bureau of Statistics, the average income in Northlands is 23 per cent lower than the city-wide average. Perhaps most importantly, there isn’t a lot of money in the condominium corporation’s budget for road and general park maintenance since most of the money is spent on repairing the sewage and water lines.

These pipes have needed to be replaced for 15 years. The trailer park manager, Mike Roy, says the pipes he’s seen are often full of holes big enough to let gravel fall in and block the passage of sewage and that if you stand on one, they are often so weak they collapse. With an estimated $18 million price tag, the condominium board has never had close to the amount of money the job requires and governments have always contended that since the park is on private land, it’s not a public responsibility. But people in the trailer park say this view simplifies a long and complicated history.

The trailer park was built in 1971 by Northland Developments, a company headed by then City Councilor Al Marceau. According to research posted on the condominium corporation’s website outlining the park’s history, Northlands was sold for $4.8 million in 1988 to a company from Alberta, Triple E Developments. Early the following year Triple E mailed out letters to tenants asking for their consent to turn the park into a condominium corporation. Despite a City by-law requiring the company to identify any “known structural or infrastructural deficiencies,” nothing in the letter mentioned the water and sewer lines had only six years before they were due to be replaced, or the fact that the new condominium corporation would become responsible for this cost. Under City policy of the day, anyone who didn’t respond to the letter was assumed in favour of the change. About a year after the first letter went out, Yellowknife Condominium Corporation #8 was born. From then on Triple E began selling lots in the park and used an assortment of carrots and sticks to make that happen. It raised rents 60 per cent over four years, according to copies of rent cheques provided by a tenant. It sent out letters offering tenants assistance from The Bank of Montreal to get mortgages to buy their homes. It also reminded tenants that condominium fees had been “set” at $50 per month, but did not mention this would leave the new condominium board without funds to replace the pipes.

Triple E sold off most of its remaining property in the trailer park 10 years ago, and made a substantial profit in doing so. But even when park residents assumed majority control of the condominium board, fees remained recklessly low. The current President of the condominium board told me how frustrating it was that most board members were unwilling to increase condominium fees until a long time after Triple E’s departure.

This changed only in about 2005, when fees went from $65 to $100 per month. In January 2012 fees will be $220 per month, but it’s too little too late and the board has no hope of ever raising enough money to replace the pipes. To make things worse, the Canadian Mortgage and Housing Corporation recently stopped insuring mortgages in Northlands, making it significantly more difficult for residents to sell their homes.

As someone who lives in Northlands, the glaring question for me is why, in the 1980s and 1990s, nobody asked, “how are we going to replace the sewer and water lines?” The developer didn’t ask, the City didn’t ask when it allowed the condominium corporation to form and the tenants didn’t ask. Whatever the reason, thankfully this sort of thing couldn’t happen today because territorial legislation requires condominium corporations to determine how much it will cost to maintain their infrastructure for 25 years and fees are set to cover those costs.

Tonight it’s about an hour after dark. I’m out for a walk and see a few guys standing in a front yard, sipping beer around a bonfire of wooden pallets. In another yard a dog is spinning around on a chain and barking. It’s easy to forget that pipes are falling apart beneath our feet and at any moment we could be left without plumbing. I understand the condominium corporation may be legally liable to fix the infrastructure, but after learning about what led to its woeful financial situation, I find it hard to believe the board is entirely at fault. However, it no longer matters who’s to blame. What matters is that governments realize this could become a major environmental problem and help the condominium board replace the pipes so the 1,100 people who live here don’t get left out in the cold. The first person you call if your toilet backs up, or a pool of water or sewage mysteriously appears in your backyard or under your house is Mike Roy. He’s the trailer park manager and can often be seen driving around Northlands in his black truck, talking on his cell phone and cringing. He says over the past few years he has dug up nearly half a kilometre of the property’s 23 kilometres of sewer and water lines.

He doesn’t know how much – if any – sewage is currently leaking out of the pipes. But he wonders what might happen if a sewer line failed in a whole section of the park and all the residents were without water and sewer for a week or two. “How are we going to house 50 families, or more?” he asks. It’s only a matter of time, he says, until sewage starts leaching through the soil towards neighbouring Frame Lake.

Cheryl Fountain slides a stack of textbooks to one side of the kitchen table to make room for two cups of herbal tea. “My question is, who is responsible for this mess? I don’t think we are responsible for it entirely ourselves.”

I met Fountain – an energetic mother in her thirties – for the first time this fall at a community barbecue she helped organize. She was collecting guesses about how many jellybeans were in a glass jar. Beside the candies was a sign-up sheet for Citizens for Northlands, a community group she formed with the mission of, among other things, finding a solution to the park’s infrastructure problems.

This fall Citizen for Northlands went door-to-door and raised $3,000 to hire a lawyer to investigate who should pay for the sewer replacement. Fountain says as a student and parent she doesn’t have extra money and she’d like to see the prior owner, Triple E Developments, take some responsibility, along with the City.

Linda St. Amand and her husband moved into their trailer on Catalina Drive in 1983, just after her husband got a job at Giant Mine. “Oh, it was a nice trailer court back then. Everything was clean,” she says.

St. Amand has just come back from Extra Foods with a few sale-priced chickens. She wraps each one in wide strips of brown wax paper, dates them, and places them in the freezer. “I’m not struggling, but I’m watching my budget,” she says. Ever since her husband died a few years ago, St. Amand has lived alone on a pension of about $1,100 per month.

Last winter the 70-year-old started to smell something bad in her house. “So I got on my knees and crawled underneath the trailer,” she says. “And sure enough the sewer pipe had broken. What a mess!” Mike Roy, the trailer park manager, ran an “umbilical cord” of sewage to the neighbour’s trailer so St. Amand could continue to live in her home while a crew replaced the pipes underground. St. Amand wasn’t bothered by the episode, though. “Hell, I got water right here,” she says, gesturing to her water cooler. “You just have a sponge bath with all the curtains closed! This is my home and it will be until the end of my days.” 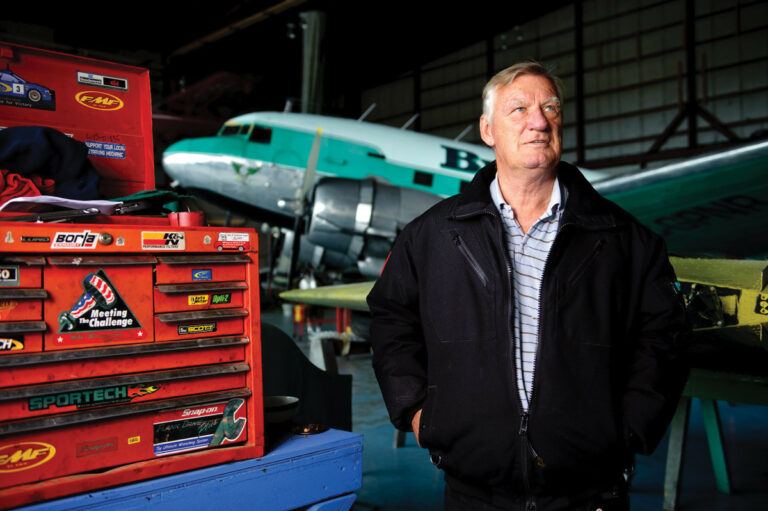