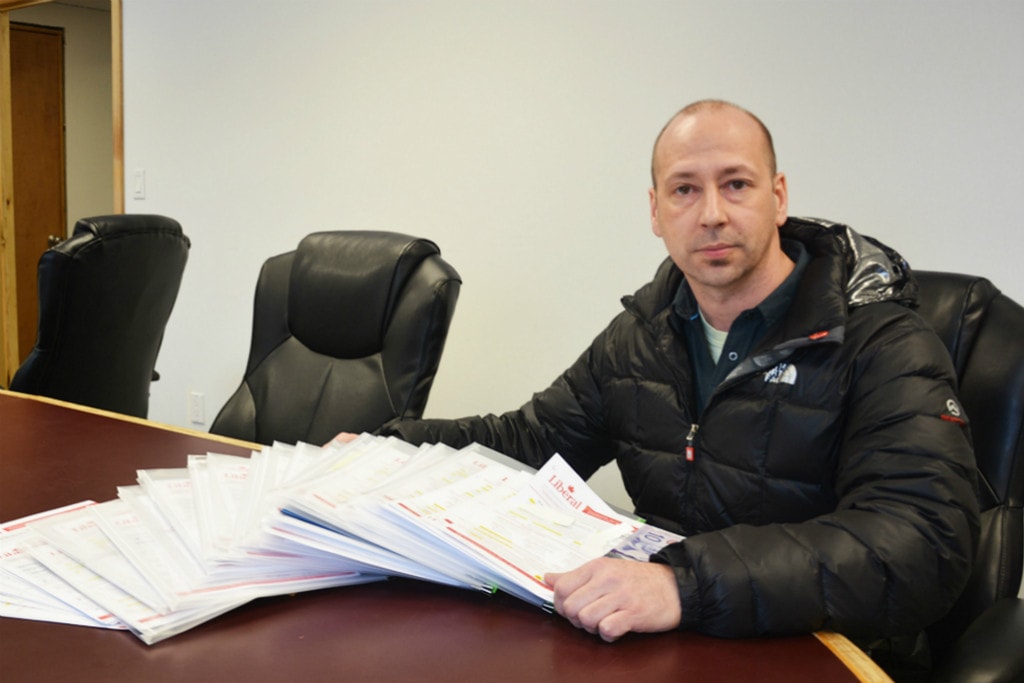 Just after noon on Wednesday, April 15, Yellowknife Centre Member of the Legislative Assembly Robert Hawkins arrived unexpectedly at EDGE’s office carrying a sizable pile of plastic envelopes, filled with signed Liberal Party membership forms with cash stapled to most of them. He asked me to join him in our boardroom.

Over the past two and a half months, he told me, he’d signed up 450 new Liberal members, and now, after withdrawing from the nominee race two weeks ago, he was returning the membership forms and payments to people he’d signed up. He let me snap some photos and then took off, forms in tow, without taking questions.

We’re still unsure why he showed this to us. Hawkins himself wasn’t clear on his own motivation; our best guess is he wanted to display the amount of support he’d gathered during his abortive run at the party nomination. Usually politicians don’t show up in journalists’ offices with material that’s going to provoke more questions than answers (and we certainly can’t confirm his claim that he signed up 450 members — an astronomical number by the standards of federal party membership in the NWT; he did not give us time to count the forms). The experience, however, left us with questions.

Why was cash stapled to downloaded forms that said in bold red type “Payment by cheque or credit card only”?

And why did Hawkins still have membership forms one would assume he should have turned in for processing months ago?

Liberal Party policy on membership signup is clear: cash is an acceptable form of payment when using downloaded forms. The policy logic is clear enough; with downloadable forms, it’s impossible to tell where the money trail leads.

To be absolutely clear, there’s no evidence of any fiscal malpractice. But for the past several months, Hawkins has been directly contravening party policy by printing out downloadable forms en masse and signing people up with cash rather than credit or cheque.

When we questioned him about this in a subsequent phone interview, Hawkins claimed he was given permission to do so by Liberal Party brass during a conference call in late October.

“I hope they remember the conversation,” he told me before I called the Liberal Party’s Ottawa office to confirm his story.

According to Hawkins, he was told by two Liberal operatives — the party’s national director of operations, Robert Jamieson, and Richard Maximus, whose title he did not recall — that he was allowed to use cash with downloadable forms, as long as he stapled R-1 forms to them before sending them in. (R-1 forms are a type of membership form that can only be requested by party members, and individuals can only have up to 25 at a time).

“Nobody here recalls saying something to that effect to that candidate,” came the reply from a source close to the issue in the Liberal headquarters. “A conversation did happen, but nobody remembers telling him he could not follow the rules.”

“He can’t remember that he didn’t suggest it, either,” Hawkins said when we told him of the party’s response.

It’s unclear, at this point, whose version of reality to believe. Perhaps Hawkins genuinely misunderstood the October conversation, or perhaps the Ottawa folks genuinely forgot they’d given Hawkins permission to bend the rules. The only evidence that can be authenticated is an email provided by Hawkins from Jamieson to him on Oct. 28 that contained nothing but a link to the party’s explicit membership rules. Hawkins, for his part, claims this email was to inform him where to obtain R-1 forms, not to remind him of the party rules.

Other than that, it’s pretty much word against word, with Hawkins adamantly claiming no wrongdoing: “Everyone knew, and in no way was I stopped. I don’t believe in any way I’ve done anything wrong… they knew all along about the process.”

Rosanna Nicol, president of the NWT Liberals, declined to comment on Hawkins’ assertion that the local executive knew this was happening.

It’s also unclear what top Liberal officials knew about it. However, Hawkins forwarded me private correspondence between himself and Jack Siegel, chair of the Liberals’ national Green Light Committee, where Siegel, without confirming the veracity of Hawkins’ account gave him talking points. Their correspondence in its entirety:

To: Jack B. Siegel

The media has called and said they’ve confirmed that they spoke to someone at the National Office that in essence can’t recall the conversation I had with Mr. Jamieson and Mr. Maximus on Oct 27 2014 where I was lead to believe that I could attach R1 forms to the downloadable forms where people offered to sign up and pay only with cash.

On our October 27th conversation, I made a note where Mr. Maximus said that he will ensure that the forms stapled will be accepted with cash.    However because they can’t confirm that point one way or another, they are now running with their own perspective and opinion.

The online story will be up later today unless there is anything else to offer.

Subject: RE: Media inquiry about permission to attach Downloadable forms to R1 forms.

I’m a bit puzzled by your first paragraph; my understanding is that the party office is not in much of a position to comment on forms it hasn’t seen and that were not submitted.

It does seem to me, however, that you can say something entirely factual, namely that it was your understanding that a downloaded form plus a standard form, plus cash was an acceptable submission, entirely in keeping with the spirit of the rules, and that you had every intention up to the time you decided to get out of the race, of submitting them in that fashion. I think it is also fair to say that if those had been rejected you likely would have disputed that through the Party’s process. Combined with what you told me on the phone, that you are in the process of returning the material, cash included, to your recruits and facilitating their taking out of membership in the ordinary course if they still want to participate in the nomination process, I think you have a perfectly reasonable, acceptable and entirely truthful response.

That’s the best I can offer.

Politicking behind the scenes

Whether or not Hawkins got permission to flout party policy, there still remains the question of why he was in possession of hundreds of signed membership forms, two weeks after he had withdrawn from the race, and months after he came into possession of many of them.

As Olivier Duchesneau, communications manager and spokesperson for the national party put it: “Those individuals who requested these forms, or printed the downloadable forms for the purpose of soliciting family and friends to become members of the Liberal Party of Canada, should respect the wishes of these people who willingly signed-up, and should submit those forms and their respective payments to the LPC membership office.” One of the downloaded membership forms, with cash attached, that Hawkins brought to EDGE’s office

Hawkins, however, says he withheld the membership forms for his own strategic reasons.

“This is a competition… It’s about strategy, though there’s no question about them not being sent in. The politicking behind the scenes is about when to send your wave [of forms] in.”

Once someone’s membership gets processed, he explained, they’re added to the party database. “As soon as I send it in, [other nominee candidates] start calling and email them.” Because he didn’t want other candidates “sniping at or eroding” his support base, his plan was to wait until after he got greenlit and then “send a tsunami of support in, not a trickle.”

When asked if he thought it was fair to sign people up and then withhold processing their memberships for his own strategic purposes, he responded that this was “not an unusual practice.”

Besides, he added, “almost every single person bought memberships to support me,” with “lots of NDP and Conservative supporters [signing up for Liberal membership to support him] who don’t want to be involved in the Liberal process.”

This kind of politicking does not seem to be what the Liberal Party is hoping for when it lets people like Hawkins canvas other members. As communications manager Duchesneau put it: “People who signed those forms agreed to become member of a national political party, not a member of an aspiring nomination candidate’s campaign.”

“Our goal is not to run our own campaigns; it’s to build support, with members who are committed to the party,” said Kieron Testart, one of the Liberals’ two greenlit nominee candidates in the NWT. He pointed out that if someone withholds completed membership papers, the would-be members (who believed they had signed up) would not be able to participate in the local chapter’s policy discussions and association business.

“As soon as your paperwork’s done, you should be able to participate. When Trudeau came to town, the people I had signed up got invited to a special event with Justin. If we hadn’t plugged them in, but held them on the sidelines until the nomination, they wouldn’t have got that experience.”

“And if their information is already processed we’re not rushing at the eleventh hour to get them through… if we wait ‘til the last minute, we’re scrambling to process them and people might lose the chance to vote [in the nomination meeting].”

Technically, Hawkins wasn’t breaching party policy by not submitting the memberships; there’s simply no way for the party to track who is in possession of downloaded forms, and there are no rules outlining how long someone can hold off submitting forms other people have signed.

He told us his plan had been to send them in, and claimed he had already sent in a few waves of membership forms. Now, however, he’s says he’s returning the forms and letting people sign up again for the party, if they wish to, on their own.

“Many people from all political stripes eagerly signed up to support my nomination… [and] many have said that they’d go back to supporting their original party. In the end the only advice I’ve offered was, I’ve encouraged folks to support someone they know and trust,” he said.

At this point it’s still unclear why Hawkins withdrew from the race only weeks after he’d told EDGE, “I’m so focused on the nomination and the longer strategy, I don’t put too much energy into thinking about plan B.”

“The situation was becoming very complicated, so my wife and I sat down with our kids and we came up with this decision as a family,” he told EDGE on Wednesday.

He refused to elaborate on what “complicated” meant. What we do know is that two other nominee candidates were greenlit by the party and Hawkins withdrew.

He did, however, say his “impression was the local executive preferred a different candidate… I’ve been in this business long enough to know if people are behind you or not.” 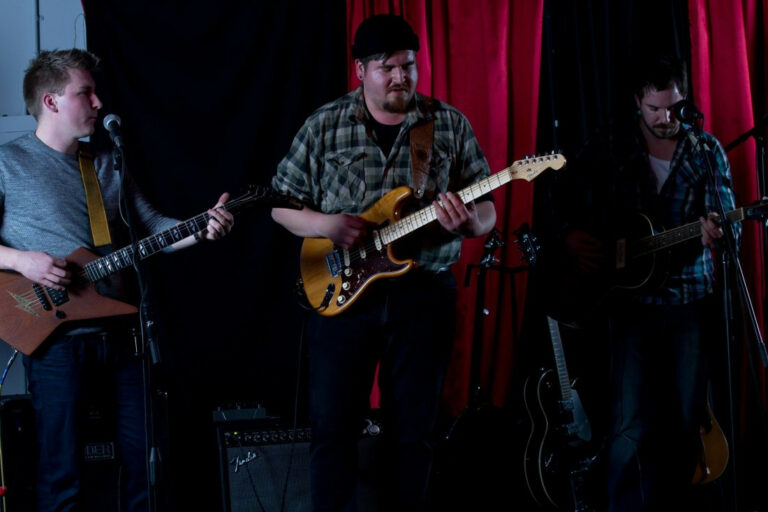