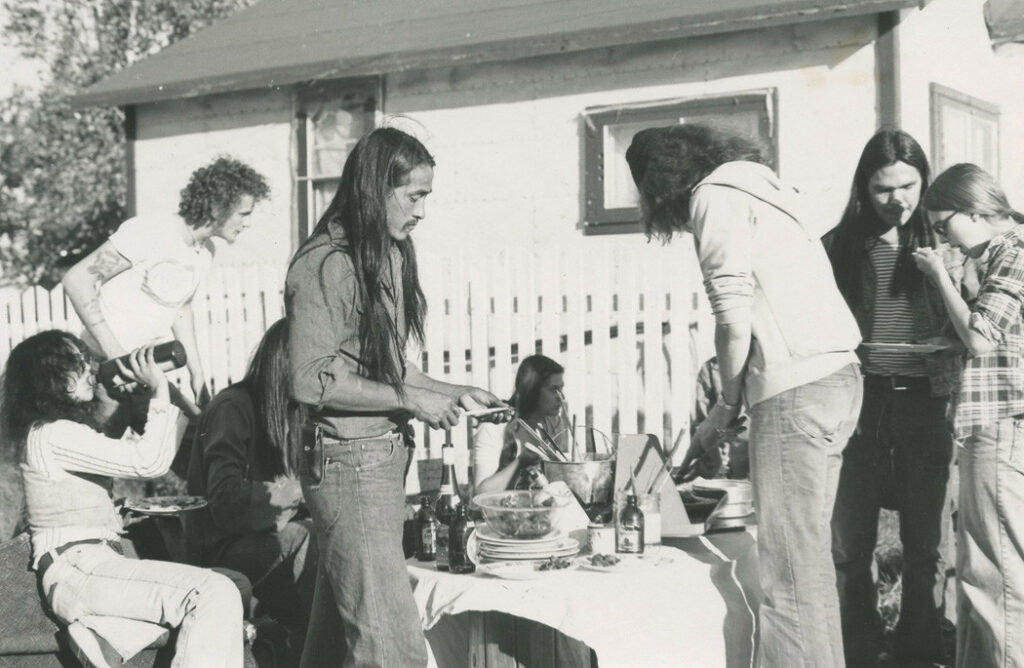 A loud rapping at the front door interrupted our quiet Friday evening. Fran and I had stayed behind to check out charts we’d picked up of the Nahanni River after everyone left our Willow Flats shack for the party on Latham Island. Planning a summer canoe trip on a cold night was our remedy for winter blues. While Bob Dylan wailed from his new album Desire, we sat on the living room floor with maps spread out between us, drinking tea and tracing the route with our fingers.

We’d just been discussing where we’d get the floatplane to drop us off. I had come north to paddle wild water and was making the case for Moose Ponds where the river dropped 2,000 feet and promised 90 km of heart-stopping rapids. Fran was arguing that the charter would cost more because it was farther and Rabbit Kettle might be the better location.

“Come in,” I said, and was surprised to see Doug in the doorway. As Yellowknife’s aquatics supervisor, I’d been coaching him at early bird swim every morning. Nice guy, but not someone I expected to drop in for a visit. Behind Doug was another burly fellow who ducked to get through the low doorframe. Doug appeared uncomfortable as he waved a piece of paper and said, “Patti, I have a warrant to search this property.” Great. I’d been teaching a plain-clothes cop how to swim.

We didn’t get up from the floor. Just nodded and let the Mounties do their thing. We sipped our tea in silence and listened as they bumped their way around. I didn’t figure they’d take long because we didn’t own much. The five of us who shared the house had each come north from Ottawa with a packsack, sleeping bag and pocket knife. We’d collected the furniture from the dump except for the speakers, which were a discard from a neighbor. Our beds were built with two-by-fours raided from a construction site.

Doug clomped up the ladder into the attic. There were two tiny bedrooms, no electric lights and low ceiling beams. He swore when he banged his head. Fran hollered, “Watch out for the litter of kittens under the window.” The second officer was tossing the downstairs bedroom that I shared with my boyfriend. I heard a crash as the teapot with what must have been my carefully tended Patience plant hit the floor. Then there was a ripping sound of something being torn open. Our friend’s dog, Papa, an Old Town Special, huffed when he had to move from his favorite spot on the couch as cushions beneath him were turned over and prodded.

Fran and I tried to communicate without speaking. She nodded toward the spider plant hanging from a corner and raised her eyebrows. I shook my head. On occasion it was the hiding spot for hash. I knew it was all gone but I wasn’t so sure about other items in assorted locations such as the tabs of acid that had been stored in a teapot. Any other evening I would have been alarmed by this visit. People were coming and going at our place day and night. The self-proclaimed Ottawa House was one of the larger shacks in our Old Town neighbourhood so it was a gathering spot, party place and unofficial hostel. Perhaps that’s what raised police suspicions. Last month one of our visitors dropped off a parcel that looked like a tiny bale of straw. I was uncertain if the kilo of potent B.C. gold had all been distributed or if it was still in our hiding spot, but I was confident the Mounties wouldn’t find my personal stash. Just one joint I was saving for a special occasion.

Doug stuck his head in the back porch. The plastic that covered the windows rattled as freezing air got sucked into the house. It was our cold storage unit for the caribou hindquarters, which friends brought in by snowmobile from Snowdrift in exchange for a place to crash. It was also a room for the honey bucket toilet, a galvanized pail lined with a green garbage bag. Not much odor because it froze as fast as the towering pillar of truth climbed higher. Beneath it was a large metal box painted black where one of our house mates hid his weed, but it appeared Doug was losing interest in the search because he didn’t spend much time out there. Bob Dylan was still moaning about Sara in some far off exotic place when the two officers gave us an official nod and stomped out.

We rolled up our maps. The Nahanni could wait. We had to find our friends. After throwing a log in the airtight wood stove we bundled up and hiked across the hard packed snow on the bay. As we walked, we giddily relived the experience and all the things that could have gone wrong. I unzipped my parka, reached beneath the layers of sweaters and thermal underwear. Securely tucked beneath my braless, sagging boob (a girl’s best friend for contraband), was my stash. One last joint for a special occasion. We lit up and Fran said, “Think your Mountie will show up for his swimming lesson on Monday morning?” In 1975, the self-proclaimed Ottawa House in Willow Flats, shared by five roommates from the nation’s capital, was an easy-going gathering place where people came and went day and night. Author Patti-Kay Hamilton is pictured far right.