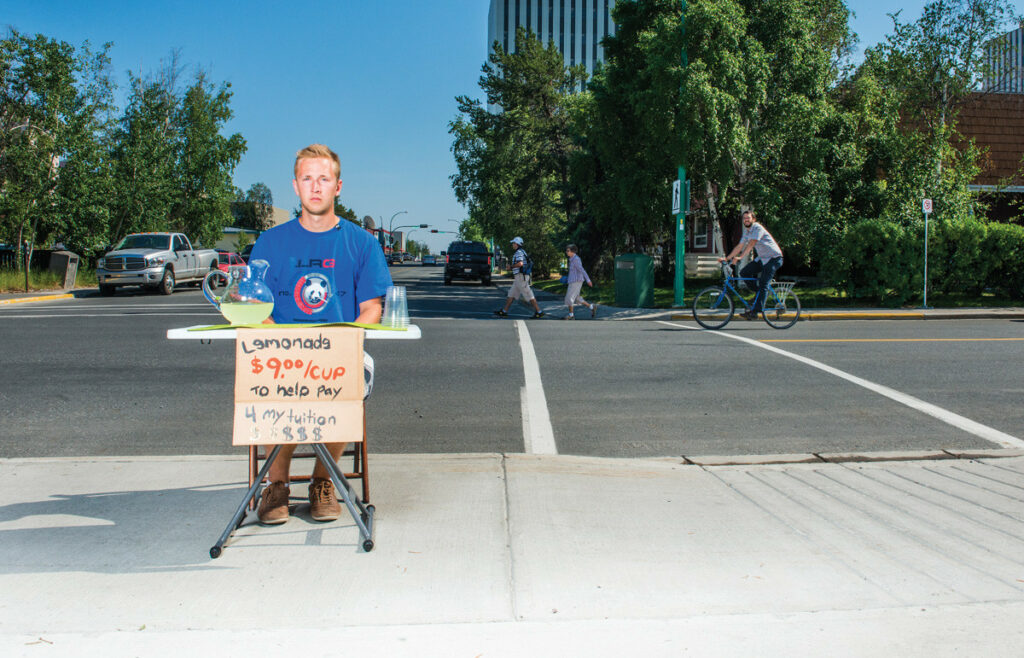 An inside look at YK’s summer student scene

I’m an unpaid summer student employee in Yellowknife. No, really. I am.

Ok, well, I was. This summer, as a requirement for my Masters degree in Journalism at the University of British Columbia, I completed six weeks of unpaid interning at Up Here magazine – an incredible experience that taught me more in a mere month and a half about my profession of choice than I ever thought possible.

That being said, while unpaid interning is commonplace in the journalism profession (and many others) across North America, the idea of going without a salary while working over the summer up North is something that would have most Yellowknife university students up in arms. While our contemporaries down south often fight for minimum-wage jobs, many of us return home to well-paid positions within the Government of the Northwest Territories or the City of Yellowknife, or with one of a myriad of local small businesses – many of which come with paid vacation hours and a Northern living allowance.

In fact, I was one of the city’s fortunate sons, as well. Before my internship year, I spent four summers working in communications with the GNWT’s Department of Industry, Tourism, and Investment. By the end of my fourth summer, I was being paid approximately $30/hour, which would work out to roughly $58,500/year.

It’s a pretty precipitous fall to go from that kind of salary to being unpaid, even if it was voluntary and predicated by school requirements, and it got me thinking about what other summer students in Yellowknife go through on a yearly basis.

How hard is it to find a well-paying summer job in Yellowknife? How do those who get them manage to do so? Are things really so much better here than they are anywhere else – or did I just hit the jackpot?

I’m a figures guy at heart, so my quest to put together the puzzle that is Yellowknife’s summer student scene first led me, naturally, to statistics. Nobody knows exactly how many students search for summer employment in Yellowknife on a year-by-year basis, so coming up with a ballpark number took a bit of sleuthing – and a lot of educated guessing. I started by examining how many students applied for Student Financial Assistance in the North Slave Region: 935 in 2011/2012, according to the latest GNWT data. Next, I multiplied that number by percentage of the region’s population that resided within the capital (just below 85 per cent, according to 2011 census data), giving me a ballpark number of 795 post-secondary students in the city every summer. The stat doesn’t take into account students who don’t return home, or local high school students looking for work, but it was a base – a number to put to the massive young workforce that invades the city every May. Conservatively, I bumped it down to 700 students looking for work.

Adding 700 new jobs to a city with 13,000 people employed (according to Statistics Canada) is quite the undertaking. That’s just over five per cent of YK’s labour market, and a good percentage of the burden is taken on by the public sector. Work-starved students pine for jobs in the GNWT, or with the City, and this summer they’ve hired approximately 200 between them. The jobs are in high demand; every summer student I spoke with while researching said that they’d applied at one or both employers.

The reason these positions are so competitive? “The pay and benefits are fantastic,” Joseph Okpik-Cutten, a current summer student with the GNWT, exclaims to me. “You can basically blow the minds of other students down south at school when you explain how much you’re going to be making during the summer.”

According to a 2012 study by the Canadian Education Project, the Canadian average hourly wage for summer university students is $12.50; Alberta tops the provinces with an average of $15/hour. In Yellowknife, both the City and the GNWT consider summer students “casual” employees – meaning they have a job term of 4 months or less, and, according to their latest collective bargaining agreements, all City casuals besides library pages and cashiers make a minimum of $17.88 an hour – at the GNWT, casuals make a minimum of $20.10 hourly (roughly $39,000/year) with that number increasing depending on position. In addition, these employees are entitled to numerous benefits negotiated by the Union of Northern Workers – things like pro-rated vacation leave and a Northern living allowance – that only serve to sweeten the pot.

These “mind-blowing” jobs carry a caveat: you’d better be local, and it doesn’t hurt to be Aboriginal. The City of Yellowknife only takes on Yellowknife residents, and the GNWT’s Summer Student Program falls under the government’s Affirmative Action policy, meaning the vast majority of summer students – over 95 per cent territory-wide this year – are either designated Priority 1, Indigenous Aboriginals, like Okpik-Cutten, or Priority 2, Indigenous Non-Aboriginals who have lived in the NWT for at least half their lives.

“On rare occasions, non-priority students may be hired when there is a requirement for an educational background not available within the pool of eligible students,” says Jackie Bell, Manager of Policy and Communications for the GNWT’s Department of Human Resources. “But to be eligible for the Summer Student Program, students must meet eligibility requirements as an NWT resident and be a post-secondary student.”

The numbers painted an interesting picture: for students like me who met eligibility requirements and lucky enough to be selected from the pool of potential employees, working for the City or GNWT is a veritable gold mine.

Tyler’s experience is one I can corroborate. In fact, everyone I spoke to during my research said more or less the same thing. That said, it’s not all sunshine and rainbows in public sector summer employment. The GNWT’s program, in particular, has had its fair share of criticism. In 2009, Frame Lake South MLA Wendy Bisaro suggested scaling back wages in order to hire more summer students – a suggestion that was quickly shot down by the Union of Northern Workers.

The wages Bisaro suggested – “something closer to $20 or $18 an hour” – would be considered by most to be above-average wages for post-secondary students, and are still head-and-shoulders above the national average. However, UNW President Todd Parsons argued that “if the GNWT was to… establish a set rate for summer students… that may be in contravention of the NWT Human Rights Act.” Parsons defended his position by explaining that a set rate for summer students could be considered discrimination because of their age.

In my interviews with summer students, past and present, I asked many of them whether they thought public sector pay scales were fair; most considered them exorbitant. “Instead of hiring one student for $32 an hour, I don’t understand why they don’t hire two students for $16, and create more employment in the North,” one comments. “It doesn’t make sense to give a student with little to no professional experience that much money,” says another, with both students asking not to be identified.

For hundreds of Yellowknife’s post-secondary students, though, comments on public sector jobs are made from the sidelines. Unable to secure these highly coveted positions, they are left seeking work within Yellowknife’s small business sector – and although most are ultimately successful in securing a well-paid job (“the pay’s definitely better than I’d find outside of Yellowknife,” says 20-year-old Travis Kamitomo), some are left out in the cold.

“I didn’t get a job at home and had to stay down south,” exclaims one longtime Yellowknife resident, who also asked not to be named. “I don’t hate it down here, and I have a life still, but I’d still rather be making money at home, you know?”

How to get jobs and impress people

Getting left out of the public sector umbrella isn’t a death knell for Yellowknife’s students, though, far from it. There are jobs available everywhere in the city – from the local hardware store to the marina. Some enterprising students take matters into their own hands: creating self-employment in fields from mountain bike camp to windshield repair. But for those looking for their first job, or those shut out of the public sector, the questions are numerous: how do you find these jobs? Where do you even start?

When I asked Kamitomo, a Dalhousie student who’s worked for multiple small businesses in Yellowknife over the past two summers, for advice to give to would-be employees, he was very concise: look early, and look everywhere.

“If you’re not looking for jobs right at the get-go, it’s difficult,” he says. “Apply really early, and ask around – ask people you know, if you can. It definitely helps to know someone.”

When looking for work, Kamitomo made use – and recommended – the excellent Jobs North labour exchange board at jobsnorth.ca. However, he emphasized that making direct contact never hurts. “Don’t just e-mail,” he says. “Go with the personal approach every time.”

In fact, there are so many jobs available in the city that we’ve started attracting students from other parts of the country. Daniela Cermakova moved to Yellowknife in the summer from Nanaimo, BC, to live with her boyfriend – in search of the ever-elusive high-paying job. Now, she’s got stable full-time work – and a mittful of offers from employers all across town.

“There are jobs up here,” she tells me. “You just have to apply everywhere. I started applying a solid month before I came here. And I’d sit down every day, send out two or three e-mails to people I saw on Jobs North.

“And I didn’t hear back from them for a long time, but then they all started to contact me. I applied to a lot of places that were definitely outside of my comfort zone. I would look at the qualifications and think ‘I can’t do that,’ but I applied and they all called me.

“You just have to be patient. Because somebody will call, and it will be worth your while.”

In the end, I was glad my search for answers led me to Cermakova. Sure, she’s not a Northern lifer returning home in search of that picture-perfect job, but she is a flawless reminder of what the vast majority of Yellowknife’s summer students know deep down: things are good here. Really good.

In fact, nobody I spoke with said they’d rather go down south to work than stay in Yellowknife, including the ones who had to. For some, the enticement of coming home is a summer of parentally financed food and free rent, but, for others, it’s a chance to come back – or come to – that thing that makes Yellowknife so special.