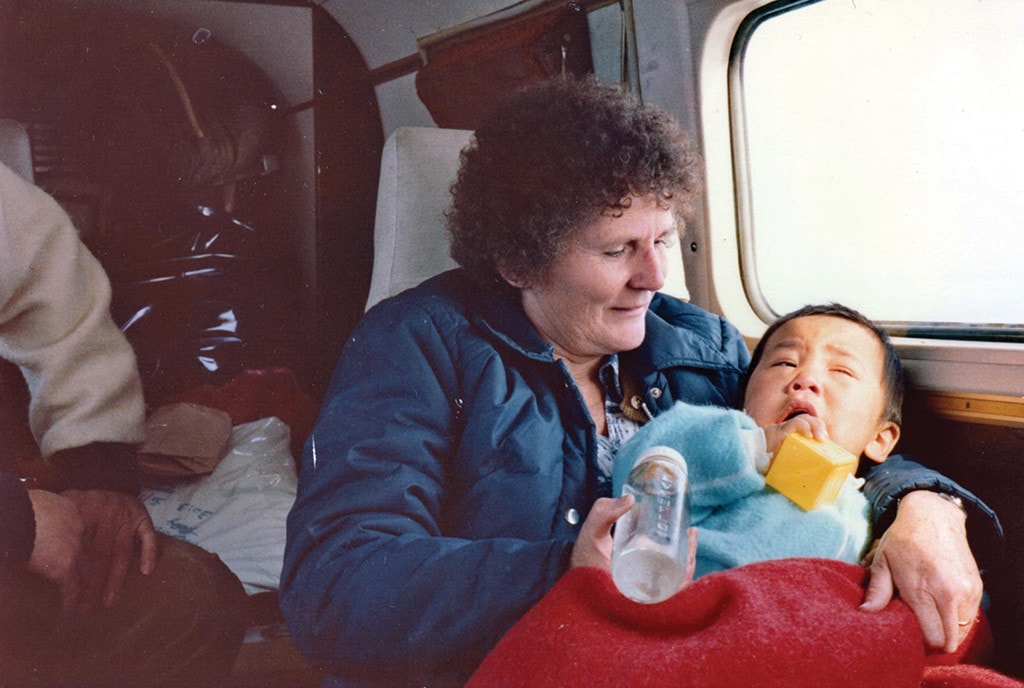 It was a hot, cloudless day in July. Couples, singles, and groups of friends walked from downtown, from Old Town, or from cars parked off 52nd avenue. Most of Yellowknife, it seemed, was heading for Sir John Franklin high school, where the celebration of life service for Jan Stirling was about to begin. Inside, the wide-reaching scope of Stirling’s life was readily apparent. The bleachers were packed full, and more benches were being carried in. Stirling, a nurse, was in charge of public health in Yellowknife from 1971, when she first moved to the Territories, until 1997 when she retired at age 70. She died the day before her 90th birthday. Known as ‘Grandma Jan’ to many, she led an extraordinary life caring for Northerners of all kinds. She forged special connections with those enduring depression, isolation, and social exclusion.

Stirling was part of a group of women that included Barb Bromley, Kate Hamilton, Faye Stark, Leslie Singer, Nancy Trotter, Leone Trotter, Eva Henderson, and more, who helped nurture and grow Yellowknife’s community in its early days, and who are widely credited with forming the heart of the city. Even more people would have come to mourn, to say goodbye, and to pay respects if they could have. Stirling made friends across the North. She travelled in every direction, on hundreds of medical evacuations to and from remote communities, often in a single engine Otter or Cessna bush plane. She also welcomed Vietnamese immigrants into her life and home when they began coming to Yellowknife in the 1980s. Her English-Vietnamese dictionary was well-thumbed, as she took the time to learn the words related to their physical and emotional needs. There are families all over the North that named their child Jan, her son Rod told Northern News Services in 2015. “Jan believed God showed up every minute, every second, every nano-second,” said Rev. Peter Chynoweth as he opened the service. Nurses from across the Territories had gathered as a choir to perform a tribute in song. “No nurse was braver or bolder, you won the heart of the soldier,” they sang, referring to the years she spent as a nursing officer in the Royal Army Medical Corps. Stirling was posted to Kurie, Japan, where, in a true Florence Nightingale-style romance, she met her husband-to-be. Major William Stirling had been evacuated there after being wounded in the Korean War.

In the choir of nurses, singing to their colleague and friend, a vast amount of strength, resilience, and experience could be felt. Northern nurses are exceptional people. As J. Karen Scott wrote in her introduction to Northern Nurses, True Nursing Adventures from Canada’s North, nurses here have to deal with snowmobile accidents, gunshot wounds, stabbings, comas, TB, diabetes and meningitis. They often preside at births, and provide cradle-to-grave care for everyone in the community. As every northern nurse knows, writes Scott, there’s also that famous tag-line – “and other related duties” –  in their job description. The nurse might have to train a visiting doctor, be the undertaker, the dentist, social worker, dietitian, lactation consultant and/or plumber. They may even be called upon to fix the furnace or tinker with unreliable two-way radios, which they once relied upon for communication. Like the pilots they work so closely with, they must be intimately connected to the weather. They are skywatchers, always making it their business to know if the ice road is open, and what the differences are between various winter fogs.

Karen Scott and Joan E. Kieser compiled and edited many nurses’ stories in Northern Nurses (volumes I and II), first published by Kokum in 2002 and 2005, in which Stirling was able to recount several of her own medevac memories. On her first flight to the tiny outpost camp of Umingmaktok, in what is now Nunavut, she naively drank a lot of coffee. She was in agony

by the time she arrived. When she landed, there were, of course, no trees. After making a series of embarrassing hand motions, an Inuk woman finally showed her where she could relieve herself. During a medevac to Edmonton, her plane was hit by lightening, and in the skies over Fort Reliance there were once so many caribou they had to fly around in circles trying to scare them away so they could land. Stirling cared for newborns in incubators on planes and once delivered a baby in the sky over Great Slave Lake. She treated a man from Gameti who cut his fingers off while chopping wood, and then flew back to Yellowknife with much heavier cargo. Besides the poor fingerless man, the local priest hitched a ride, as did a pile of furs – still dripping with blood – that a trapper asked her to deliver. These medevacs, said her obituary, “gave full expression to Jan’s skills and compassionate nature.” It’s no wonder Stirling won so many awards – most notably The Governor General’s Caring Canadian Award, two Queen’s Jubilee medals, and Order of the Northwest Territories. Many honours were bestowed upon Jan Stirling for her compassion and service. Photo courtesy Aislinn Stirling.

Providing healthcare to northern peoples has always been a complex and controversial issue. While nursing stations existed in southern outposts long before, the government did not establish its first nursing station in the North until 1947, in Inukjuak, Quebec. By the mid-1960s there were 25 stations across the North, with many nurses functioning as midwives. The best nurses quickly became a familiar and regular presence in the community, respecting local customs and expertise. In another excellent book, Place and Practice in Canadian Nursing History, historian Myra Rutherford wrote about the various attitudes with which nurses approached their vocation. Though most early nurses served under a heavy colonial mandate, there were some, like Kimmirut nurse Dorothy Knight, who wondered whether or not she could actually help the Inuit. She would eventually come to regard the whole medical enterprise as too paternalistic. Rutherford described a note Knight wrote to herself in the 1950s; “The most sensible way of handling the kind of ignorance you’ve brought to the Arctic, Dorothy, is to impose it on others as little as possible.”

The late Barb Bromley, who began work in Yellowknife in 1948, learned as a young nurse out on her first medevac about the damage her sincere attempts to help could do. Though gravely ill, an Ulukhaktok man did not want to leave his home or his daughter, especially as his wife had already been removed from the community after contracting TB. He had not been told where she was. “This experience made me aware of the closeness of the Inuit family. I had a sense of how the people must feel with the changes brought on by the arrival of the white man,” Bromley recounts in Northern Nurses. Bromley treated the man in his igloo home, working by the light of a seal-oil lamp, and did not attempt to move him. Much later, she was very relieved to learn he had recovered.

Bromley started nursing in Yellowknife when it too, was an outpost. Con Hospital, built in 1937, wasn’t much more than a first-aid station, but it was where Yellowknife’s first doctor, Oliver Stanton, served the mining community. A bigger hospital was built in 1948, but it burned down in 1966. In a typical show of northern resourcefulness, the Elks Hall was turned into a temporary hospital. Babies were born in the bar. Several operations were performed there too. In 1967, Stanton Hospital opened on Franklin Avenue, with the current hospital opening in 1988. By the time the mid-nineties rolled around, the hospital had revolutionized healthcare in the North. More and more surgeries could be held in Yellowknife, reducing long and costly medical trips to Edmonton. The new and improved Stanton Territorial Hospital will open in 2018, with an expanded medical laboratory and better emergency and diagnostic imaging capabilities.

Stirling loved nursing in the North. In a recorded interview she gave in 1984 (accessible at the NWT Archives), she spoke about how on each and every flight she’d marvel at the vast, rugged beauty below her. She talked about Yellowknife when it was young – one highrise, one streetlight, gravel roads. She especially loved the United Church’s potluck dinners. When the power went out, as it invariably did, people used to shine their car headlights into the church windows. “There was a real closeness that isn’t there now,” she said softly. “So many old timers are moving on now.”

“We used to know our homeless people,” remembers Stirling’s longtime friend, nurse Leslie Singer. “Jan knew them all by name. She called them her ‘lovelies.’ It’s different now. I miss the closeness that nurses had with patients. In public health you could keep the closeness longer than usual.” Another good friend, nurse Nancy Trotter, concurs. “Patients were more interested in seeing Jan than they were the rest of us,” she laughed. “Jan would never pass anyone by.”

Kassidy Blampied is a freshly minted pediatric nurse who completed her RN exams this past June. She grew up in Yellowknife, so is well aware of the previous generations of nurses like Stirling, Singer, and Trotter. “I look up to them,” she says. “They have so much knowledge, the kind you can’t get from a textbook.” She attended Aurora College, which began offering a diploma program in 1994 and then a degree program in 2000. “The hospital here is great too, it’s very supportive, and I like that it makes a point of encouraging patients to express their cultures, which nurses always need to be learning.” Some communities invest in their culture by employing community health representatives and interpreters. Therese Zoe, for example, lives in Gameti. She worked for years helping to translate and explain Tlicho cultural traditions and medicines to the nurses working there. “For example, nurses want to clip new babies’ fingernails,” she wrote in Living Stories, a book she co-authored. “Our Elders teach that if babies’ fingernails are clipped they won’t have good luck when they grow up.”

In 2014, the Aboriginal Nurses Association of Canada reported that there were 380 nurses in the Northwest Territories, 45 of which identified as First Nations, 25 as Metis, and 10 as Inuit. Canada still has a far way to go in terms of achieving higher representation.

For her part, Stirling was blind to race, gender, and spiritual beliefs, and treated everyone with love and respect. Her memorial service, though beautiful, did not do justice to her legacy. It couldn’t have – her life was too big to be described and celebrated in an hour-and-a-half. She was a woman who was comfortable soaring through the air in a little plane, landing on a distant patch of frozen land and zooming off on the back of a stranger’s snowmobile – all to help a someone in need. She was comfortable stopping to speak with a homeless person, comfortable wading into the depths of other people’s needs. She was comfortable being generous – it flowed from her with ease. “No, she didn’t cultivate that. She was born that way,” says Leslie Singer, emphatically. “She was very rare.”

The slideshow though, showed another side of Stirling’s life. Though she suffered dementia in her final years, the photos of earlier times slipped slowly by, and amid the changing hairstyles and fashion trends, the family meals, birthdays, anniversaries, and vacations, it was easy to see how loved and blessed she was by her husband, children, and grandchildren. They shared her with what must have felt like the entire world. “The support from her family made it all possible,” says Nancy Trotter. “We have them to thank.”