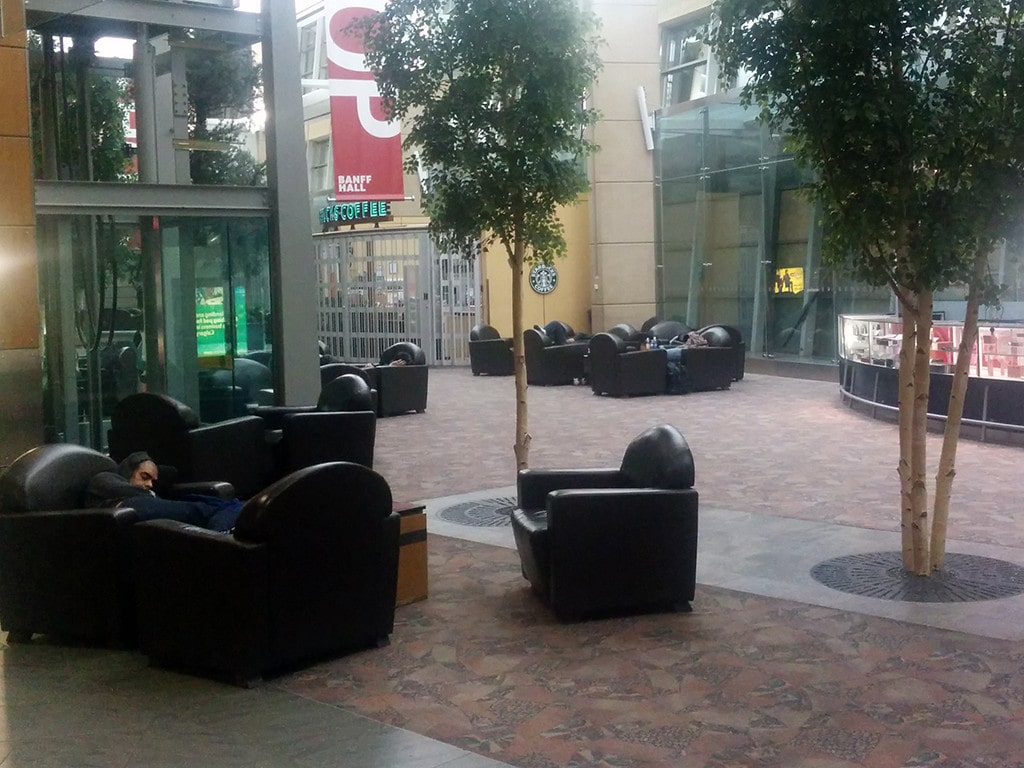 I didn’t consider this hard-hitting enough documentary journalism to get up close and photograph people’s various positions, but this gives an idea of the space.

Usually when facing an over-night itinerary, I’d book a hotel near the airport. But I hadn’t thought ahead and was facing a 6 a.m. departure, which hardly made the effort and expenditure seem worth it. Waiting for my bag, I made a last ditch call to a nearby hotel and the $205 per night price tag made up my mind: I was going to crash at YYC.

I didn’t know where to go, but a security guard bumped into me and almost eagerly asked if I was “looking for a place to crash, bud?” He guided me around the corner past the escalator to the weird food court (you know the one, and if you don’t, it’s not hard to find) and then past Montana’s, which you can find on this interactive map. The strangely shiny escalator at the Calgary airport.

Here in this wing, completely without signs, was where I would lay my head along with about a dozen other people in the same situation. “This is the place, bud. This is where you can sleep. Look, there’s even a newspaper,” the security guy said. Please understand this opportunity is greater than it may seem, largely because some airports close parts of their building for a few hours each night.

The dark brown lounge chairs were comfortable enough to sit in, but contrary to the security guy’s claim, pushing two together did not “make a bed.” What it made was a type of pod where one could sleep in the hangman position, chin on chest, or contort their upper body to allow them to lay on their side.

Another option included splaying one’s legs to allow the head to lay flat on the seat of one of the chairs. None of these solutions seemed conducive to anything in the neighbourhood of a good night’s sleep.

I’m considering writing the Calgary Airport Authority to encourage them to get reclining or lounge chairs, similar to those I’ve used during long layovers at airports around the world. I’d even pay some sort of fee to have my chair recline into something resembling a bed.

What to know before you go: