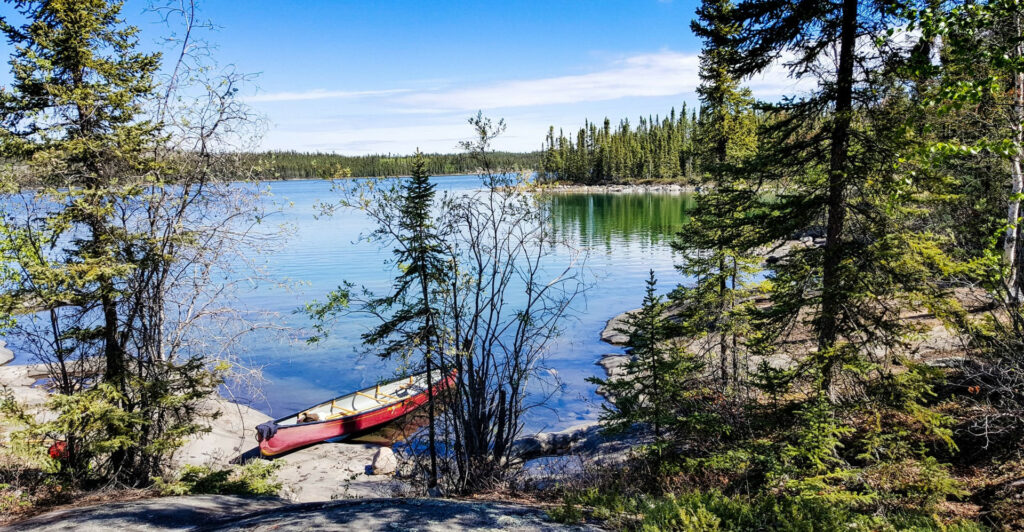 "The reward is getting to paddle in places no vehicle can reach, in one of the most beautiful and isolated areas of the world. Which serves to put mild hand cramp into perspective"

“To reach the real gems, you have to do some legwork.”

So says Bill Stirling, gazing at a Northwest Territories map from his basement office at Yellowknife’s Overlander Sports.

In the NWT, half the joy of canoeing (and most of the effort) takes place outside the boat. The portage —  picking up your canoe and carrying it overland to the next lake or river — is your only way of unlocking most of the territory’s best-kept paddling secrets.

My portaging baptism came last weekend underneath a 17-foot Hellman Prospector, lugging the thing back down a hill on the way home from Hidden Lake. Given that my wife had casually sauntered up the hill carrying this hulking great canoe a day earlier, I had an obligation to at least make an attempt.

On the bright side, canoe and all participants made it down the hill and into the water safely. However, there is now a ring of burst blood vessels around my shoulders and neck that would imply some refinement in technique may yet be achieved.

Hence the trip to Bill for tips. He, helpfully, offers the following: “There’s no easy trick. Just put your head down. Your body gets used to it. It breaks in.”

Ah! So I was doing it right, I just have to accept a deformed spine. That’s a relief.

I may exaggerate. Bill, after all, seems perfectly mobile after decades of flipping a canoe over his head — sometimes for (literally) staggering distances.

My portage back from Hidden Lake was at best half a kilometre (and I only did one of the three portages between Hidden and the highway single-handed). Portaging for 90 kilometres is beyond my conception.

For the uninitiated, the way the whole portaging thing works is you sidle up to an unsuspecting canoe, grab it, hoist it up onto your thighs, then effortlessly lift it above your head and march to the next lake. This entertaining Tiffany Ayalik demonstration features little grunting and few expletives. Your experience may differ.

The thing with portaging —  I announce with great wisdom and expertise, having done it approximately once — is balance.

This becomes apparent when travelling downhill, since you can’t see what’s happening to the end of the boat behind you. Canoes rarely come equipped with wing mirrors, making it nigh-on impossible to know if the back of the vessel is about to crash into the earth as you descend. If it does hit the ground, it’s obviously going to tip the front forward, and that can require mightily nifty balance adjustments.

The first time that happened was when I began to contemplate what sorts of injuries you might sustain in a “portage collapse”.

Unexpectedly, my hands were the body part that suffered most. They are constantly applying or releasing pressure to keep the canoe on a level, which rapidly became wearing. You don’t have a lot of choice but to keep doing it.

Also a factor: trees. Hidden Lake is possibly the second-easiest portage outing in the Northwest Territories (Tartan Rapids at Prosperous Lake is easier, says Bill), but still features more than enough trees and its fair share of sharp turns. You may need fancy dancing to shimmy your canoe through the obstacle course.

The reward for all of this is getting to paddle in places no vehicle can reach, in one of the most beautiful and isolated areas of the world. Which did serve to put mild hand cramp into perspective.

After Hidden Lake, Bill recommends newbie paddlers like yours truly look to the portages around Tibbitt Lake at the end of the Ingraham Trail. From there, you can build toward a longer, multi-day paddle like the portage-aplenty route from Reid Lake down through Jennejohn Lake to Dettah. (As most NWT paddlers will already know, there’s a series of great maps you can buy to help with some of these.)

And the ultimate? The number one do-before-you-die Northwest Territories portage? “Pike’s Portage,” says Bill, pointing to the area east of Fort Reliance on the east arm of Great Slave Lake. “It’s legendary.”

If you’re unsure what the qualification is for a legendary portage, Pike’s Portage has its own book — in which it is hailed as an “ancient gateway and the funnel for early travel”.

Bill says this is a 26-kilometre portage, although some other sources place it a little longer. (Frankly, if you’ve carried a canoe for 26 kilometres then what’s 40 kilometres at that point?)

He calls it a tough two-day trip at least.

Territorial tourism website Spectacular NWT dubs Pike’s Portage “a passageway between worlds,” which sounded like their view of my survival odds, but Bill says it’s more to do with the landscape.

“Finishing that portage and going in to Artillery Lake is pretty special. You see the transition from the boreal forest into the barrenlands. You’re at the divide.”

I am sold. I will report back from Artillery Lake. If the internet is still a thing by the year I get there.