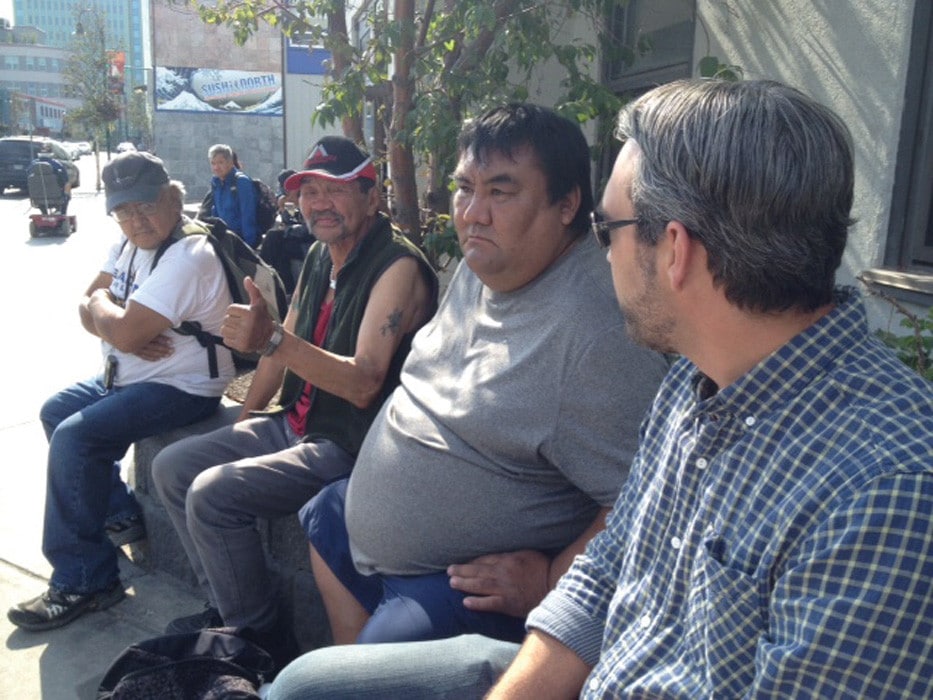 Yellowknife saw some major changes this spring and summer beneath all the smoke. It started when the one and only day shelter closed its doors to the homeless on May 31st. Then, less than a month later, the City removed the beloved benches from the front of the post office, a popular gathering spot for those with few other options. The City’s main man says he is aware of the punch these changes packed. On August 9, Mayor Mark Heyck took a walk downtown to talk with the city’s most vulnerable, and with me, about possible solutions to homelessness.

When we arrive at the post office, we take a seat directly across from Centre Square Mall on the brick flower beds that have become the de facto new benches. To our right there’s a small crowd also sitting along the post office’s edge, quiet and restful. The scene is a sharp contrast to what’s taking place across the street at the mall. The mayor and I watch as 20 people pace around the entrance. You can smell what’s about to happen. Suddenly, one woman, fists in the air, starts running towards a man, yelling at him. The mayor pulls out his cellphone, “Can you give me a second?” and starts talking to the RCMP. “Yeah, she’s taking swings at a couple of people,” he says. Help arrives quickly, even before he’s off the phone, but it’s not the police. “Yep, there you go,” the mayor says as a bylaw officer gets off his bike. The mayor explains that, unlike the RCMP, bylaw officers can’t enforce liquor act restrictions or make an arrest, but they can contact the RCMP and have made people feel safer with their presence.

We’re not the only people watching the mid-day fight. To our left James Thrasher and Joe Norn are sitting, and watching too. We shift over towards them and ask if we can sit down. Unlike us, both men are regulars here, they’re homeless. “Is this Mark, the Mayor?” Joe Norn asks. The mayor smiles, shakes his hand and introduces himself. We take a seat. Sitting on the bricks, it isn’t long before the benches come up. “It’s like the people that are using it all the time are the targets. I mean sure they are drinking but where else are they going to go?” James asks.

James doesn’t have to think long when asked what he thinks the City needs to do to make his life better. “Well, there’s no shelter right now. If they did have one, these streets would be empty.” Meanwhile, there’s still arguing across the street, and we’re all still watching.

James carefully looks at them as he talks about the shelter, and why he misses it. He is staying at the “Sally Anne” – the Salvation Army – and has a bed there. That’s when Joe pipes up, “we get good acceptance [at the Sally Anne] they give us toast in the morning and then in the evening we have supper. You know, I really appreciate that.”

The mayor sits and listens to both men. Smiling and shaking his head. James wants to talk some more about the Sally Anne, “I’m not sleeping in the road” he says. Then he tells us he is a member of Alcoholics Anonymous and that helps him; but, James doesn’t have the face of a man relishing in victory. He isn’t smiling. I ask if he is struggling. “Right now I am not because I go to AA and that, and I’m in the program. But I am still affected by what’s going on around here, no benches and stuff like that. It just seems like they are spitting on you. You know? Like you’re nobody. They make it worse too because it’s not going to stop anybody, people still come here, and they pass out here, they never used to do that.”

After saying thank you and good bye, the mayor and I walk back to city hall.

There’s silence. Talking to, and hearing from James and Joe was a strange form of Saturday afternoon chit chat; it was friendly and kind, and life-changing, all at once – the kind of conversation you know could affect peoples’ lives, depending on what you do with that information. “As the mayor of a city with a homelessness problem, what’s your biggest challenge?” I ask.

“That’s a tough one,” he answers after a while, hands in pockets. “We can be an integral partner in making a differences in people’s lives, but it’s always a balancing act between making sure we are looking after our roads, sewer systems, bylaw and landfills . . . all those things, while always casting an eye to people like James, and working well with others to make sure we can help people.”

He talks about the City’s involvement with the homelessness coalition, non-government agencies, and the territorial and federal governments, the startup of Bailey House (a transitional home for men) and the near completion of Betty House (a transitional home for women) – and a new focus on programs like Housing First, designed to gradually get people into homes, living “normal” lifestyles. The mayor says the City and the Department of Health and Social Services also worked together to re-establish a new day shelter in a new location – the two-storey white building on 49th St. across from Centre Square Mall – with a target opening date of Oct. 1. It will also offer programs to help patrons deal with mental health and addictions.

But, what about right here, and right now – today? James and Joe are sitting on the edge, today, and a woman is drunk in front of the mall, not getting the help she needs.

As its name suggests, the Housing First model gets people into a house, then let’s everything else follow. According to the Mental Health Commission of Canada website, the approach is being introduced across Canada, but has been successful in the U.S. and other parts of the world. In September, City Council approved a five-year plan to tackle homelessness that includes bringing Housing First to Yellowknife.

With an emphasis on choice, and working every step of the way with a team of care providers, those on the street and in temporary shelters get immediate access to permanent housing in their community, without any pre-conditions – such as sobriety. A care plan is then prepared by the participant in collaboration with their team to apply for disability benefits (key to getting a lease agreement). Once settled in, the team helps participants to access community health services for acute and chronic health issues, including addictions. Then participants are offered assistance in pursuing their unique treatment goals, which can include vocational training and support in “establishing and re-establishing social, familial, and spiritual connections.”

Having a roof over one’s head leads to stability. It also saves money. According to the Mental Health Commission, traditional institutional responses to homelessness such as the prison system and psychiatric hospitals, are substantively more expensive per person ($66,000 – $120,000) than investments in supportive housing, which have an estimated annual cost of $13,000 – $18,000.

In Winnipeg, a Housing First initiative was started in 2009 with 513 homeless participants. By 2013, 73 per cent of them had retained housing. Housing First has been implemented province-wide as part of Alberta’s 10-year plan to tackle homelessness. In Calgary, it’s been so successful there have been shelter closures.

The City has begun scoping out the program, getting ready to start offering homes to the homeless in 2017. Yellowknife is eligible to access up to $360,000/year from the federal government towards Housing First, either to buy apartment complexes or possibly build new ones.