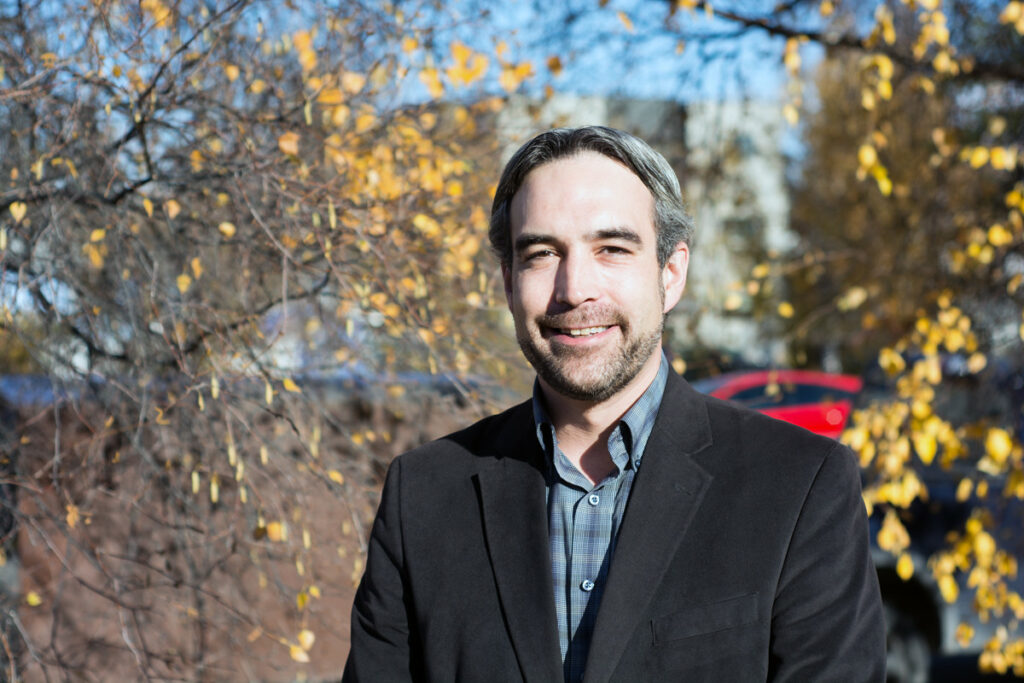 In answer to an accusation from his sole political opponent that he ‘isn’t even trying anymore,” Mayor Mark Heyck smiles wryly and says“I’ll leave it to voters to judge how hard I’ve been trying these past three years and the nine years I was on council previous to that.”

Until recently, the 39-year-old incumbent with three council terms and one mayoral term under his belt seemed poised to cruise back into City Hall unchallenged. Now he’s back in campaign mode, pointing out what he sees as his successes: increasing City Hall’s communication with residents using social media, webcasting, online surveys; playing a significant role in reviewing the GNWT’s municipal infrastructure funding, which should see more money flowing into Yellowknife’s coffers next term.

There’s a lot of boring business mayors have to deal with, and the next mayor will be charged with managing several major infrastructure projects: the $15-$20 million submarine pipe to the Yellowknife River and the replacement pool.

There’s really not that much wiggle room on these big-ticket items. On other things, however, there’s more mayoral discretion, specifically in what direction to guide council. Here’s a breakdown of Heyck’s thoughts on a number of hot-button issues:

Heyck says the City can and should focus on energy retrofits and encourage medium- and high-density residential development.

The City has been developing an energy-retrofit program that individual homeowners could use to undertake energy-saving renovations – installing pellet boilers, for instance, or putting in better windows – on the City’s dime, and then pay the City back over several years through taxes.

“The idea is that there’s no up-front cost to the homeowner. It’s basically tied to your tax bill and therefore tied to your property,” says Heyck. “The evidence we’ve seen from other places, as soon as that new technology or energy efficiently improvement is made, the homeowner is saving more money than they’re paying back on their tax bill, and once that’s paid off, everything else is gravy.”

The program is ready to go, says Heyck, but the City still needs enabling legislation from the GNWT, something Heyck hopes to get in the coming year or so.

Beyond energy, he thinks the City should continue to “make sure there’s land in desirable places zoned for medium- or high-density residential development.” He claims the City’s active role in land management over the past half decade helped spur “a mini-condo boom.”

“I think we absolutely could be doing more, and I think we could be doing things smarter,” Heyck says of homelessness. While the City does not have a direct mandate to deal with things like homelessness or public housing, it does help fund the day shelter and the Side Door, and should be actively promoting a housing-first model, which provides housing along with a support team to deal with other social issues, such as addiction.

“It’s not common to build a new building for housing first, but to look at vacant spaces throughout the city. And we’ve successfully played that facilitator role in other instances… whether it was getting Bailey House started, or Betty House, or helping to flow through the funding to Hope’s Haven. So I think we have a good track record bringing together different agencies… [and] different orders of government to contribute to these efforts.”

Heyck stands behind the plan to turn the 50/50 lot into a commercial plaza, despite the proposal drawing criticism from councillors and members of the public.

“We can quibble about should there be a building over here and how do we configure an arts studio and do we really need a washroom? But at the end of the day, the project team that was working on it took all the information, all the feedback they received and put together the best concept they had for council’s consideration,” says Heyck.

A library or some other anchor tenant would be great, he says, but that kind of project would be years in the making and cost far more. For him, it’s a question of how long council is willing to do nothing. Besides, he agrees with the argument put forward by architect Simon Taylor, one of the plan’s main designers, that the key to revitalizing the area is increasing pedestrian traffic – something accomplished more by a plaza than a single large building.

Should he be re-elected, he’ll continue to lobby the REITs that own the mall to commit to the plan. “Part of the reason for acquiring the 50/50 lot was to show the [REITS that the] City has skin in the game.”

And worry not, he says, “There’s still opportunities to modify the plan and try to build consensus. But the new councillors will also need to learn that sometimes you need to compromise a little bit, otherwise you’re not going to move ahead at all.”

Because we don’t have a voting mayor, unless council is split evenly down the middle, the next mayor won’t be directly involved in approving or shooting down the Canada Winter Games bid. That said, Heyck is a strong advocate for the games.

Data from recent games – in Whitehorse, in Halifax – show the event typically has a positive short and long-term economic impact on host communities, he says. And while the games will cost an estimated $36 million, he points out that much of this will come from the territorial and federal governments, as well as private sponsors.

“There’s some investment from the City, $9 or $10 million, but even in that component a significant portion of that can be in-kind services and use of facilities.”

“It’s not easy, but nothing worthwhile is ever easy. If we feel it’s going to benefit the community economically, socially, culturally, then I would say let’s continue our work of pulling this information together and present it to council.”

Within the City’s limited mandate, the best way to attract people and keep them here is to invest in amenities that improve quality of life, says Heyck.

“Amenities like the civic plaza, facilities like the field house… support for things like the Farmers Market, those kind of things that bring culture and life and vitality to the community. I think that’s a huge plus.”

He’s not as optimistic as he was in 2012 about the possibility of getting a university in Yellowknife or an expanded Aurora College campus, but still, he wants to see the GNWT invest more in post-secondary education in Yellowknife.

Heyck disagrees with the assessment made by his opponent, and the slew of recently announced fiscally conservative council candidates, that property taxes are out of control.

“We’ve had no tax increase two out of the last three years,” he says, adding, “municipal governments, Yellowknife being one of them, collect about eight cents of every tax dollar collected in the country.”

By his reckoning, City Hall does a fairly good job providing “critical and essential services.”

“It’s readily visible what your tax dollars are paying for, the cleaning and snow removal of the streets that you drive your kids to school on, the facilities you’re using every day, it’s the bus you’re getting on, the fire service that’s going to put out a fire, safe disposal of your garbage. It’s all these things.”

“It’s an easy target for people to criticize, but when you really delve into the numbers, I think we do a fairly good job spending people’s tax dollars.”