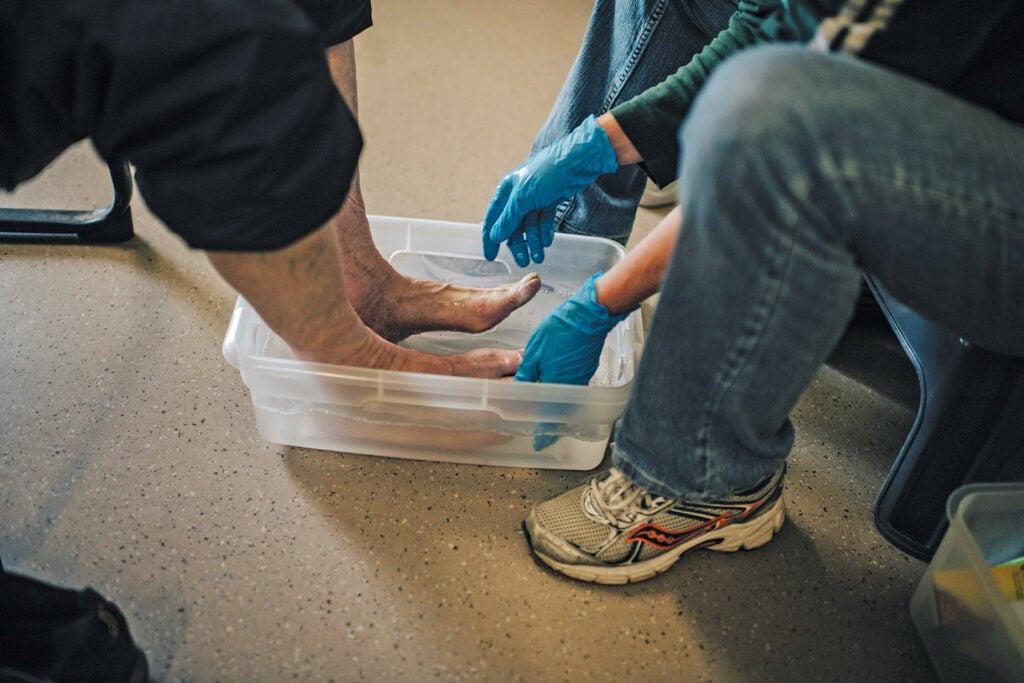 Jim peels the dirty, damp socks off his feet. “Sorry about my claws,” he says, visibly embarrassed. Feet can be embarrassing and intimate for anyone, but Jim’s toenails haven’t been trimmed in months. “That’s ok,” says Linda McConnell, a volunteer at Salvation Army’s foot-washing clinic. “Feet are feet. Yours are certainly not the worst I’ve seen.” Jim, a member of YK’s homeless community, sinks his feet into a basin of warm water. For the next 15 minutes or so, Linda will trim his nails and scrape the gunk out from under them, will file down calluses, provide minor first aid to any sores, apply lotion and give him a foot massage. Afterwards Jim will choose a fresh pair of socks and when they are available, new insoles. “I know this isn’t the jungle but I can get jungle-rot pretty easily,” says Jim. “The socks and the foot care are needed – big-time.” The condition, also known as trench foot, develops when feet stay damp, cold, and dirty for too long.

Wednesday night foot washing started close to 15 years ago, the initiative of two Arctic College nursing students. As it is a well-established program, it runs, for the most part, like clockwork. There are three or four washers per night. A fifth volunteer ferries water back and forth, sterilizes equipment and hands out socks. The Salvation Army provides all the soaps and supplies and takes care of the laundry. Volunteers come to set up a few minutes before 7:00, and are out the door shortly after 8:00.

In one sense, these nights are very ordinary. Feet get dirty. They take a beating. Self-care can be difficult for the homeless. “It’s not impossible for me to care for my own feet, but it gets pretty hard,” says John, another man who uses the service. “Especially since I’m too damn tall!” he says with a wink. “It’s too far to bend down!”

In another sense though, Wednesday nights are strangely profound. Later in the evening, mats will be spread out and the small room will become the sleeping quarters for men who  are ‘less than sober.’ But, for that one hour after dinner, the room becomes a meeting place for people who usually never mix – those with homes and those without. Stories are told. There’s a lot of banter and joking around. Sometimes it’s loud and boisterous and the Salvation Army staff will help keep order. Other nights are calm. Sometimes there’s a wistful or tender moment, especially when children or grandchildren are talked about. It can get humid from the steam, and there’s always the sound of water sloshing in the basins or gushing from the taps. Helen Hoeve, another volunteer, puts it well; “The foot washing process is not a medical service, nor is it spiritual. It is somewhere in between.”

People who are homeless spend a lot of time walking or standing on hard pavement. They are outside in all kinds of adverse weather and don’t have a place to dry out their socks and shoes. Blisters and infections develop, as do coarsened and overgrown toenails. For diabetics, there’s the risk of sores and ulcers (on Thursdays, a foot care nurse is on hand to attend to medical concerns).

For some volunteers, caring for the marginalized and vulnerable sectors of society is an expression of their faith. For all of the Wednesday night volunteers though, the act is a practical extension of how they view the homeless. “These are human beings that are worth just as much as you or me,” says Velma Sterenberg. “There are Yellowknifers who step over them, not even seeing them, but I see people that need loving, compassionate touch.”

On Wednesday nights washers and washees get to know each other. There are, of course, many regulars. Helen, Linda, and Velma know Jim pretty well. They chat with him whenever they see him on the street. They know about his kids, and when he last saw them. They know what kind of music he likes. They know the buildings in Yellowknife he helped build or renovate. It’s upsetting when Jim isn’t doing well. It’s encouraging when he is.

The kind of personal, compassionate care the act requires does not go unnoticed by those who use the service. “These wonderful ladies are not getting paid, and that means something,” says John. “They care a lot more than someone being paid so they do a better job.”

“The clients are very thankful and we get called angels from time to time,” laughs Linda. “Many of them never experience physical touch in a kind way.” “One important aspect is that the foot washer is sitting physically lower than the client,” adds Helen. “We are in a servant role. The client is the one who is elevated and that is something that the marginalized of our community are not used to.”

Once, Helen was asked to speak about foot washing at a local church. “An interesting thing happened after the service,” she said. “A successful businessman and member of the church came to talk to me and told me how he had come to Yellowknife at a low point in his life and stayed at the Salvation Army.  And then he said, ‘and you washed my feet.’ That was a moving moment for me.”

Though it is incredibly rewarding and eye-opening to be in a room where social barriers have seemingly crashed to the ground for an hour or so, it also requires a bit of a thick skin. Leonardo da Vinci loved feet, calling them “a masterpiece of engineering and a work of art.” But most people are not da Vinci. Feet are personal, and dirty feet even more so. “Some feet are so damaged and neglected it breaks your heart,” says Velma, referring to those feet with hammer-toes, toenail fungus, open sores and even decaying skin. “One lady who came to volunteer scrambled away to vomit when she had her first feet presented in the basin. She was very apologetic but did not return,” remembers Velma.

Helen worked her way up to handling feet, beginning as a water carrier at first. “It is important to say that you don’t need to have a lot of skill with foot care to volunteer,” she says. “We only do what we are comfortable doing – even if it is just foot rubs. But yeah, you need to be at least sort of alright with feet.”

Volunteers need to be alright with certain kinds of humour too. Zingers like this one are frequent  – “Heyyyy, wanna come back to my place? Oh, wait, I don’t have one.” At this, the entire room will break into guffaws of laughter. Marriage proposals can be common, especially after a good massage. The laughter is good medicine for everyone.

“I do this as a way of connecting with the people I see downtown every day,” says Linda. “I’ve lived in a lot of communities in the North, and I know how complicated the issues around homelessness are. Foot washing though, is not complicated.

More volunteers are needed for this program. If you are interested and available even once a month, please contact volunteer coordinator Ruth Mclean at jorumclean@hotmail.com