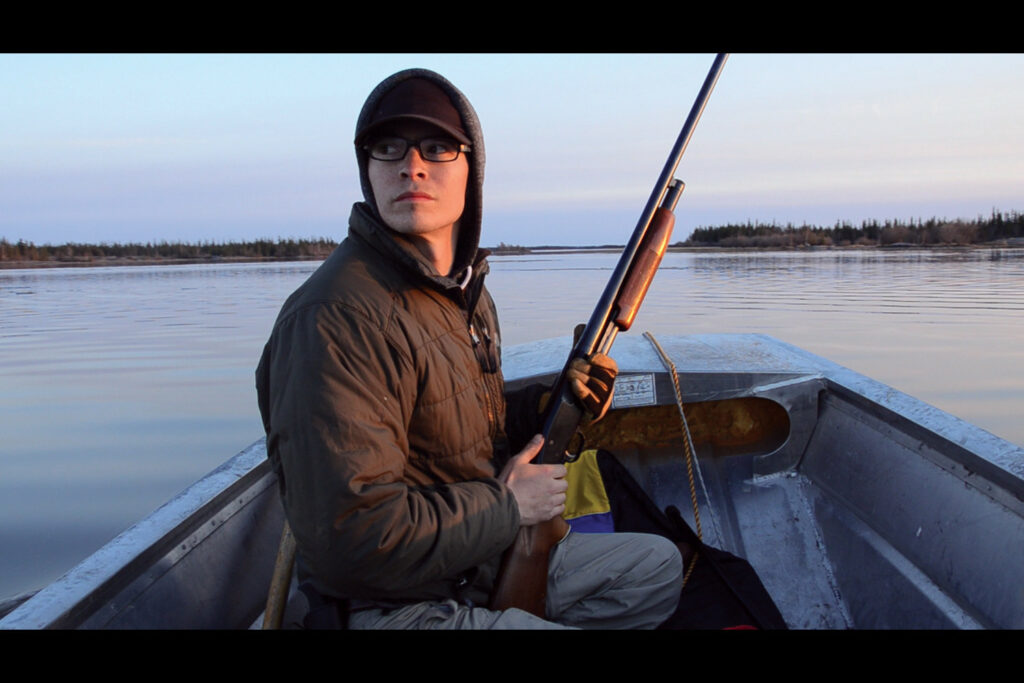 A second-generation Northern communicator, Amos has worked for a variety of media outlets from APTN to CBC. Now working for the Native Communications Society’s NCS Productions, he’s the creator/producer of Dene A Journey, a six-part documentary series set to air nationally on APTN this year.

EDGE: What’s Dene A Journey about?

Scott: “In a nutshell, it’s a reconnection story. Dene A Journey gives a young Aboriginal person an opportunity to leave their urban environment and their modern life and to reconnect with their cultural and ancestral life by going out into a remote bush camp.”

E: I understand part of the idea flowed out of the old Our Dene Elders TV show, but explain the show for someone who’s never seen it.

S: “Our Dene Elders was a TV show produced by the Native Communications Society for APTN. As a show, it was simply elders, talking about their lives in their languages. It was a pretty basic set up in terms of production value, just a camera in one position for the most part, filming the elder talking about their lives. But APTN decided they didn’t want that anymore. They wanted us to go to high definition and a number of other things, and then they wanted something different, but kind of an ode to Our Dene Elders. I was responsible for transcribing a lot of those elders’ stories, so I was just completely impressed by how much I learned of Dene history by elders talking about their lives and their childhood before modern society was really present in the North. I wanted that aspect in the show, I wanted to somehow capture that, but another element of my life that’s always been there is I am a young Dene person who’s not completely connected with my culture.”

E: How did that inspire the show?

S: “Growing up, this is the type of conversation I would have with a lot of my peers, Aboriginal peers when I was at the Native Communications Program at Grant McEwan, or I was at high school and there was a small group of us, or elsewhere in the country, the conversations always came back to I’m an indigenous person of this country, but I don’t know my language, I don’t know my elders and I don’t know everything about my culture. It was a commonality that I shared amongst a lot of my peers, so I thought let’s try to make a show about that desire to want to learn more. Dene A Journey was borne out of that.”

E: But is it possible for people to truly get back in touch with their culture?

S: “The idea is not necessarily to get back. It’s just to realize that as modern people today, we don’t have to give up the modern things about life, in order to be connected to our culture, in order to be connected to our past. And that’s what I’m hoping to accomplish with this show, is to stop thinking about it, and stop desiring it and just start living it. And to me it’s just this simple mind switch, but there are other elements that I’ve learned through the course of this work and by some of the people I’ve been exposed to in the last couple years about the political history of indigenous people in Canada and how that has changed as a motivational factor for our current generation of indigenous people.”

E: What do you mean?

S: “It basically comes down to why we as indigenous people have been oppressed and what all of the results of that have been and how we can move beyond that and just become successful, in a way, or how we can become people who can be respected, and move forward with the rest of world at an equal pace with the rest of the world, and not feel like we’re under classed because of our race.”

E: What’s it been like to watch Dene A Journey unfold from idea to production?

S: “Professionally, it’s been pretty cool to watch it all happen and to be the one pulling all of the strings on it. I bit off more than I could chew at the beginning and I was well aware of that, but you don’t get to this point without taking some big risks, not a leap of faith, but just saying there’s no other way, I can’t rely on somebody else to see out my vision or my goals, so this was my opportunity to have that chance and now that I’m getting closer to the end of the first season, it’s been really cool to see how everything’s fallen into place. Every step of the way I’ve had to learn how to do it. There’s been nobody to be like, ok, this is what you do now, this is what you do now. It’s just like, ok, let’s figure it out. And sometimes it means a lot of research before something is done, but we’re getting there, one step at a time.”

E: You’re two years into the project and you’ve yet to air an episode. How do you keep focused?

S: “Getting to this point has taken a lot of patience and perseverance. There were times when I wanted to walk away from it. It’s just never ending when it comes to the demands. And it takes so long. Even when we’re more efficient, it will still take a year, editing six one-hour episodes is an endurance test and it’s just demanding. At this point, it’s just pride. People put a lot of faith in me and the idea, so now I have to see it through. We have to show the world that we can do it. It’s not just me, it’s a small team of us and it’s the Native Communications Society and we believe in culturally relevant programming, and in order to be successful on that, you have to finish the damned thing.”

E: You were in one of the episodes. What was that like?

S: “At this point, it wasn’t that big a deal, to be honest with you. Just to get the series made was putting myself out there.”

E: Has filming the show caused you to reflect on your own connection to your culture?

S: “When I went and started shooting this show, I was just exposed to it and having other people talk about it made me think about things a little differently and also allowed me to realize how lucky I am and how much more exposure I’ve had to Dene culture over the course of my life than some of our characters and I’ve been quite appreciative of that element of my life now.”

You can watch a short demo of NCS Production’s Dene A Journey by going to vimeo.com and searching “Dene A Journey.”