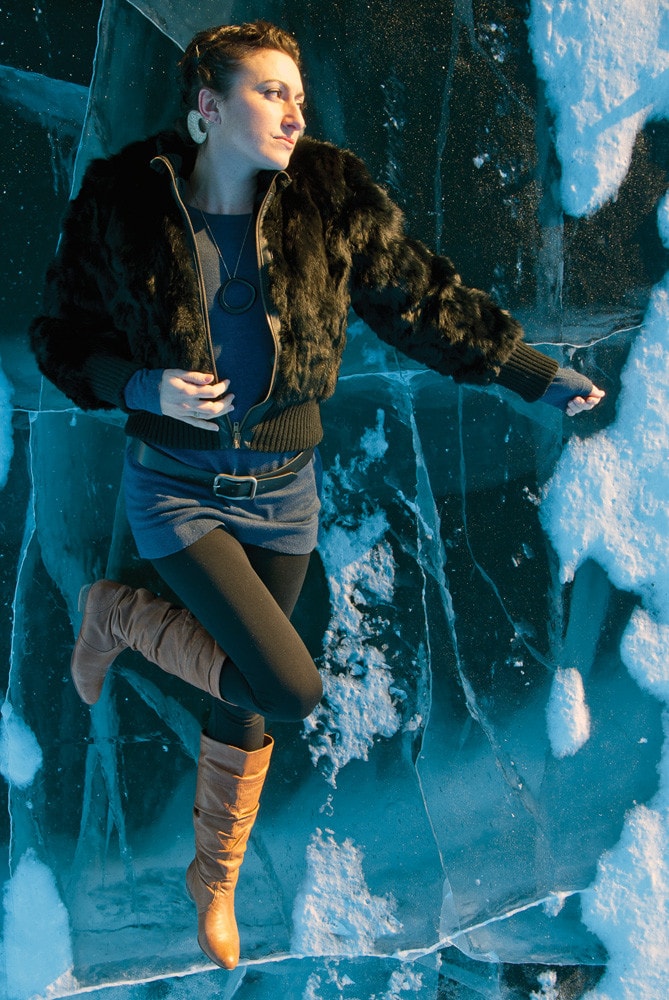 After studying fashion and briefly working in the Montreal industry, the jewellery artist returned to YK and cleared her mind

How long were you in Montreal?

Three years. Fantastic city. I’m so happy that I went to school there because I couldn’t really imagine a better place to study fashion on Canadian terms and let me utilize all my years of French immersion in the North. My bilingualism is due in large part to the fact I lived and worked in Montreal afterwards.

You’ve been back about eight years. Why’d you return?

Once I graduated and I was working in the industry, I just felt like it was such a disposable art form. Does the world need more clothes than what’s actually being produced? I was not impressed with how much manufacturing and how industrial the industry actually was when I got into it and got working. I spent a very short time on Chabanel, which is basically the fashion industry district of Montreal.

How does Yellowknife compare to Montreal?

I felt in Montreal, I was constantly being bombarded by advertisements and influence and travel. For me, growing up here, it was too much to take in. I couldn’t digest all of the information and turn it into something viable, something worthwhile, or translate it into anything at all. My mind felt tired – it was overstimulated. When I come here, if I want to be alone in a cabin for five days and work on a collection, I can. If I want to take a walk in the afternoon with my boys, and go check out some trees, and get some fresh air, and see the skies, and let myself process what I’m taking in, then I can do that. No problem. If we want to skidoo out and have a big, fat fire. It’s amazing. It’s quiet and for artists it’s an amazing place to process. You’re not influenced. You can get to the true source of what you’re trying to get to inside a project, inside a product, inside a story, you can do that here.

What’s your family’s history in the North?

My grandfather and my great grandmother settled in, I think it’s Taltson River, which is a river off of the Great Slave Lake, which was a larger settlement before Yellowknife became anything at all. That’s the place where everybody was settling, and that’s where my great grandfather is buried. My dad has been really great about taking us up that river several times and I got to see the old shack where my grandparents lived like 60 years ago, just the remains of it. I saw where they were buried. I met my great uncle Grant Beck, while he was out there raising a dog team. I still have family out there, so as I’m seeing remnants of the place, I’m also still seeing family that still lives out there. He’s since passed away, but I do believe his son is still out there raising a dog team.

When did your family come to Yellowknife?

I’m not entirely sure. My grandfather was the game warden, I believe, for about 30 years in the NWT. So that meant that my family moved all over the place. I have lots of people who would know my family in Fort McPherson, because they lived there for quite a number of years. They also settled in Norman Wells for a period of time, and also in Churchill, so moving quite significantly around the North, just depending on where the job had to take him.

In today’s YK, lifelong ‘Knifers sometimes seem skeptical of outsiders, so to speak. No?

I do know what you’re saying and I’ve even felt that myself when I started presenting my work, and presenting my work in fashion shows. People were afraid but excited about it, in terms of the style. I think that a large reason why I’ve been allowed to be successful is because of my history in the North and why people have been so open to me doing my modern interpretation using northern materials and a newer style or presentation with the fashion shows and dressing people up and bringing something a little bit more exciting than just selling your work.

How has learning to carve changed your work?

Sharing a studio space with carvers really early on in the game, and watching that industry and seeing how much money was to be made in that industry, was a good sign that I needed to let go of the direction that I perhaps found it was most easy to go – incorporating sewing and beadwork and all that, and that’s where I’d had most of my experience up to that point.

Your early work was quite different. Describe it.

My early stuff was lots of leatherwork because that had been my experience up to that point and just starter beading techniques. Lots of techniques. Tonnes of creativity in those pieces. I absolutely had a blast doing them and I don’t know if I would have changed from that route had I thought it was a viable financial pursuit. It’s fun to make feather earrings for $30, but the reality is we live and work in the North and we’re raising a family and I needed my product to be a higher end product if I wanted to be successful with family and with business. Just trying out a few pieces once I started working with Bob and Goota and Kuzy and Joe, trying out a few pieces on materials that they had collected on beaches in the North and just adding my touch to it. I sold my first six pieces immediately. They sold within a week at the gallery, and I was like I know I’m onto something.