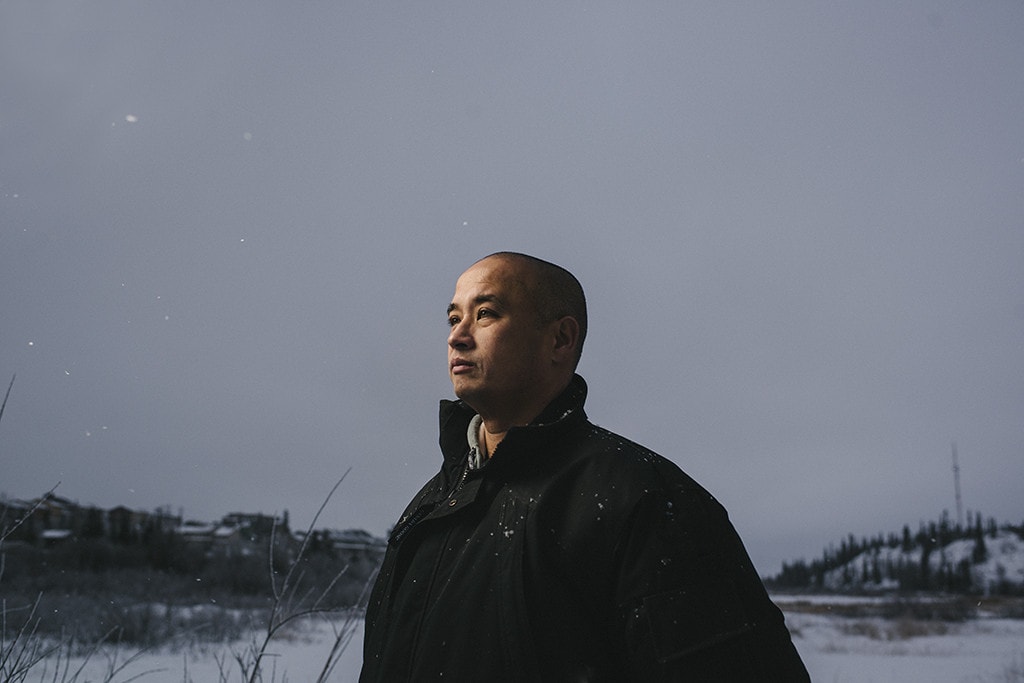 When Filipinos say party, they mean party, laughs Conrad Esteban. He doesn’t mean to look down on the rest of us, he adds, but:

“We don’t serve vegetables and dip, we don’t serve cut-up sandwiches, we serve real food with real meat with real sauce and they’re made with love. Everything just tastes terrific. That’s how it is,” he says.

“There’s a lot of food, a little bit of dancing, and a lot of laughs.”

It’s that warm and welcoming community that Esteban says made his move to Canada less intimidating than it might have been.

“I came when I was 24 years old. I came to Canada and I always longed for that home feeling. I think that’s how other people are,” he says.

“They’re looking for that Filipino accompaniment, that’s why the parties are so fun.”

Along with his wife, Esteban came to Canada in 1995. The transition was somewhat motivated by work and also by an interest in living in a different place than his hometown of Manila.

“It was actually my wife who kept pushing for it. At the start – I kind of liked my job over there, you have friends, it’s like moving from school to school, you don’t want to do it because you have friends and all that – I wasn’t sure how it would go,” Esteban says.

They arrived in Winnipeg first, where Esteban remembers being a little less impressed than he’d hoped.

Despite his early disappointment, Esteban says he got used to the city.

Both worked odd jobs, including shifts at a garment factory.

In Winnipeg, Esteban’s family slowly met other members of the Filipino community and were welcomed in. At times, he says, there was almost too much going on.

They then moved to Ottawa after he’d gotten a job with First Air – Esteban completed schooling as an airplane mechanic while in Manitoba. Meanwhile, thanks to extended work trips to communities around Nunavut while Esteban was based in Ottawa, he got used to the concept of the North.

“I left Ottawa and it was 30 degrees and sunny. In Iqaluit, it was 5 degrees and raining or wet snow,” Esteban says.

“The depression kind of set in really quickly.”

He remembers returning to his home in Iqaluit at 2 a.m. one morning, driving by the school and seeing a group of kids playing basketball.

“I wasn’t too familiar with Northern culture. I was like, ‘Why are these kids out at this time?’ But people say because summers are really short, they’re just taking advantage of the sunlight and brightness, that’s just what they do. Until that was explained to me, that’s when I kind of had an interest in the culture. It is another culture I don’t know of – rather than fight it, understand it.”

Last fall, Esteban and about a dozen others from the community started the Yellowknife Philippine Basketball League.

“The support from the community was great, so we did the second season from April to June and that was a success too,” says Esteban – commissioner of the league.

With a high number of temporary foreign workers among the community, basketball is just another way to get to know people, especially when you’ve just moved to town without having any family come over yet.

“Basketball is really big back home, it’s like hockey here,” he says.

“Pretty much every person that I ever meet, the first thing I ask is do they play basketball, especially new ones; just to show them the ropes, for them to meet people too.”

As far Esteban knows, the YPBL holds the title of the largest basketball league in the territory.

Now, after nearly a decade in the North, Esteban says he’s used to the slower lifestyle and smaller city. Not to mention the walking trails and outdoor activities.

He also has some advice for anyone else moving to a new place and looking to meet people.

“For the newcomers, it doesn’t matter who, doesn’t matter if you’re Filipino or whatever, if they’re alone, try to hang out with your Filipino coworkers; ask them where their next party is,” Esteban says. “They’ll get a good feel for how it is, have some good food, good time so they won’t be too lonely.”

Because I’d been to Iqaluit, when I first came here, when the airplane was landing, I peeked through the window and saw buildings and thought, “This isn’t too bad.”

It was a little green, I think it was in June, so my first impression was okay. Then, I was standing with some buddies and they said, “Just wait until winter.” And, yeah, that’s the cold reality.

The easy living. I always like the free space, the fresh air. You go out in spring and just smell the air and it’s so good. You walk through the trail, you go to the beach, I go to the golf course in the summer and there were times that I was just by myself playing. It’s so laid back.

It’s just the high taxes. The high property tax, it seems like you don’t get what you pay for. There are a few things, but there’s a lot of positives about this town that overshadow whatever negatives there are.

How do you enjoy the summers?

Pretty much do whatever you can to fix the house and I like to play golf, so that’s kind of my thing during the summer. I actually just started three years ago but got hooked right away.

What do you do to survive the winters?

It’s really cold in the winter, we pretty much just stay home, just watch movies. We binge on movies.

What sort of opportunities have you found here in Yellowknife that you wouldn’t find elsewhere?

Here, it’s easy to find a job. When I first came here, I wasn’t making a lot of money so I decided to take another job and fortunately, Shoppers Drug Mart hired me. I didn’t have any experience in retail but they gave me an opportunity and a lot of people would say that too.

When we came here, the original plan was two years. I was just going to get my license, get more experience and go somewhere else. But that changed and for now we’ll stick it out here. I’ve got two kids in college, it’ll be tough for us to move out and be uncertain with our finances, but who knows. I can’t say that we’re here for life, I can’t say anything for certain.