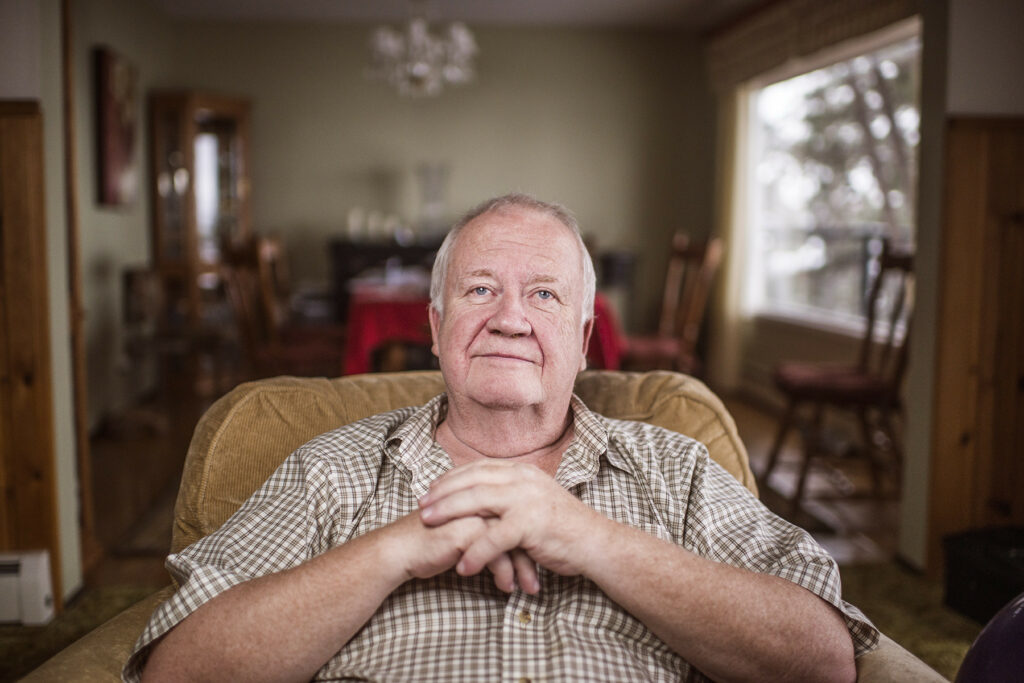 “I think I’m the only guy in Canada, probably North America, who blew up an RCMP house and never spent a day in jail or paid a single dollar in fines,” says Tony Vane proudly. We’re sitting in his cathedral-ceilinged living room on Latham Island, overlooking Back Bay. The carpets are 1970s-style plush. Around us hang the splayed remains of a grizzly bear, a black bear, a muskox and a white wolf, all shot by Tony.

It was 1973, he continues. “There was no work around here in the middle of the winter, but they were hiring in Cambridge Bay, Cambridge utilities, delivering the water, pumping the sewer out of the houses.”

Tony was at the local RCMP officer’s house, learning how to pump sewage. The house started shaking; it means the house’s septic tank’s empty, he was told. They drove off to the dump to empty the truck, but nothing came out. Must have been frozen in the house.

“We’re coming back to the house, and we knew something was wrong because the doors of the building were wide open, and everything was covered in sewage. The RCMP guy was there in his shorts and a tee-shirt, steam coming everywhere.”

“Turns out we didn’t have it on suction, we had it on a blow,” he says with a deep, Eastern European-inflected laugh.

Tony’s a businessman, hunter and refugee from Soviet-era repression.

He came to Canada, via England, in 1973, after fleeing Czechoslovakia in the wake of the 1968 Soviet Invasion. He was working in a coal mine at the time, when he and his boss decided it was time to escape.

“I knew some people who owed me favours. You have to know the right people to do it. It took false papers, British papers, and about six months’ planning.”

When the authorities found he had fled the country, they sentenced him in absentia to 17 months in prison. He wasn’t able to return home to see his family until he was pardoned in 1989.

After learning English in the U.K. for three years, he flew to Canada. It had always been his dream destination. His father had been a gunsmith and a hunting enthusiast, and Tony had been weaned on Jack London novels. In his mind, Canada was a big game eldorado, and home to untold freedoms compared with his Eastern Bloc homeland.

After some cross-country wandering in search of work and adventure, he ended up in Yellowknife and started his own painting business, Tony’s Painting and Decorating. In 1984, he and a partner bought Yellowknife Motors, which he ran until he had a heart attack four years ago.

Somewhere along the way, he met and married his wife Mary, had three kids and shot a whole lot of animals.

First of all there was no streetlights, there was no traffic lights, no stop signs and no pavement. We used to go and drag race after eight o’clock in the evening, when they shut down the tower at the airport. So we’d go out on the runway and drag-race. I had a Buick Wildcat, another guy had a great big Chrysler, and another guy had a Ford. It was all gravel road, and there were only five or six cops in town, all friends of ours, they were nice guys and there was hardly any crime. Nothing like today. When we were painting, we used to leave all the paint and spray guns and tools right beside the house outside and nobody ever touched it. Today, you’d never see the goddamn things next day. It was a hell of a difference. Today is lots of politicking and bullshit.

What’s your favourite thing about YK?

My favourite thing is to get on a plane and get the hell out of here, and five minutes later you’re in the middle of nowhere and you’re on your own. You don’t put up with nothing, and you look after yourself. That’s still the greatest place in the world. You can get on a boat, get out on a big lake. And there’s lots of opportunities here for young people. When I came here, everybody was saying, ‘Young man go west and make money.’ Well, the West was already kind of full, so we went North, first to Northern B.C., then to here.

Crime. And too many regulations. Too many stop signs, too many red lights, just the annoying crap. Bylaw officers, they’re my favourite, ya right! If I be the mayor they’ll be the first to join the goddamn line of unemployed, I’ll fire every one of them. We don’t need them, we just need a couple of dogcatchers. For the money we’re paying them we can have five six more RCMP, real policemen, which can police the town and stop real crime, drugs, break-and-entries. These bylaw officers, they’re glorified dogcatchers and bad ones to start with. You make sure you put this in!

We travel quite a bit. I go fishing and hunting. I have a friend of mine who has a fishing lodge on Great Bear, so I go visit him. Golden Lake, which is about half-an-hour flight away, used to be my favourite. For fishing, my favourite is the East Arm, though not much hunting there.

For hunting you have to wait until September 1st. Caribou used to be open the 15th of July, but the last four years, caribou is closed for non-resident hunters, even for the natives, they can only shoot so many of them. Something is going wrong with it, I don’t know if the caribou moved east, north or they just disappeared. I remember the time when the caribou used to come behind my garage, there where the museum is. The caribou from here to Prelude Lake, people were shooting them left and right, thousands and thousands of caribou. But there’s no way they were all shot by us or the natives. I think they changed their migrating route, that’s why they call them migratory caribou. And maybe in another five, 10 years they’re going to come back this way.

We go to Mexico, or I go to Argentina around this time of the year to hunt bears. Here I go wolf hunting on the winter road. We see them and try to sneak on them. We have skidoos with us. I used to do ice fishing, but I’m getting too old. I like to sit in a boat with my feet up and open a beer and throw the fishing rod in, or go fly fishing on the rivers.

What kind of opportunities have you found here in Yellowknife that you don’t think you’d find elsewhere?

Well it was great, because first of all there was no union here, you can work whatever hours you want, however many days a week you want, you don’t have to pay the union dues and you don’t have to go on strike. All the construction businesses and related trades to construction have never been unionized and that’s a big plus. Down south, you might get a job but the carpenters go on strike and you can’t cross the picket line. Like in Vancouver, at that time, it was so bad, even in Alberta, people were out of work two, three months a year because somebody was on strike. So that was the main reason we came here, because there was opportunity just great. If you’re not lazy and you want to work, to be unemployed in Yellowknife? That’s just unbelievable. Everybody is looking for somebody to work. It’s still the case. There’s not that many jobs as laborers, but if you go trades, plumbers, electricians, painted, carpenters, machinists, you’ll always get a job.

Where else am I going to go? This is my home. I built this house 36 years ago, I designed it and hired the people to frame it and plumbers. We started end of April, and we moved in end of September, it went bang, bang, bang, bang.