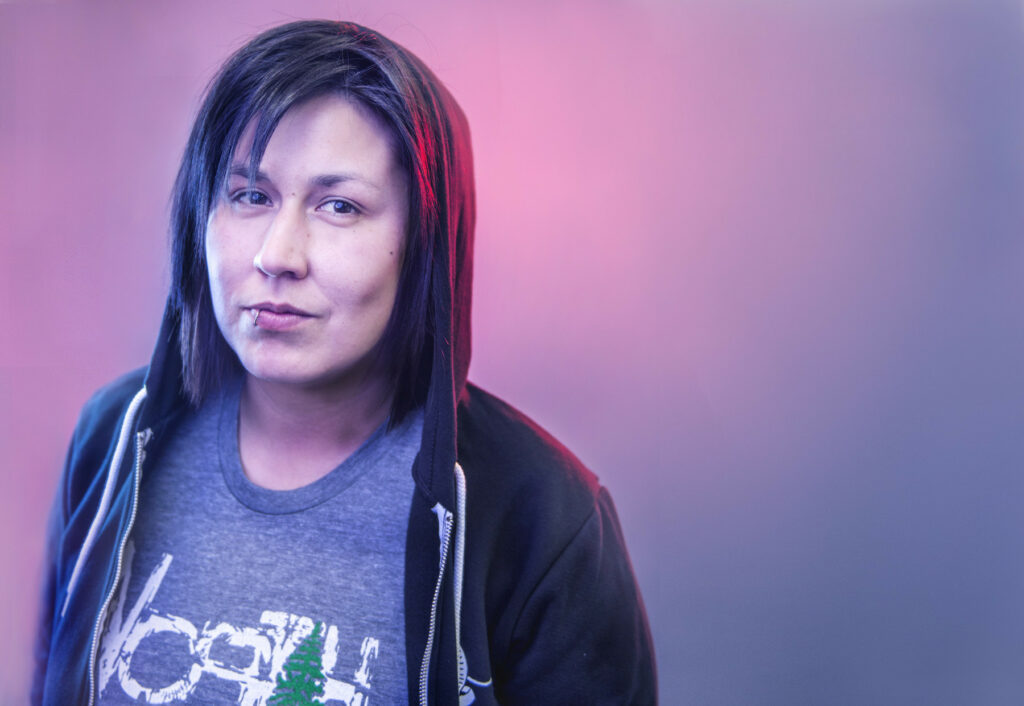 Sarah Erasmus was never keen on her first name. There were simply too many Sarahs at school, so people started calling her by her last name. “Erasmus eventually turned into Eras-Moose, then just Moose or Moosey,” she says now, with a laugh. So was born the idea behind Erasmus Apparel’s ubiquitous logo, an ‘E’ with moose antlers.

Four years after the company launched, it has become one of Yellowknife’s best-known brands. Sarah is the creative mind behind that logo, the neon-coloured headframe hoodies and pretty much everything else in Yellowknife’s tee-shirt mecca on Franklin Ave.

“I always loved tee-shirts,” she says. “I was the kid wanting the one-of-a-kind shirt at a party.”

Sarah grew up in a large, well-known family in Ndilo. Her dad is Bill Erasmus, Dene National Chief, though she’s never caught the political bug.

“Maybe because I’ve been around it my entire life, I wanted nothing to do with it, because that’s all I heard. Not that I don’t care or follow along with what’s happening. But I’m good with my tee-shirts.”

Hers was something of an idyllic childhood, building forts, clambering over rocks, bustling from one aunt’s house to another’s. Her early love for the outdoors continues today, with fishing, sailing, snowmobiling and rec-league softball and soccer as regular activities.

“The one design that I feel I absolutely nailed was the Northern Livin’ Sticks We Live By … that pretty much defines my life here, a fishing rod, an axe, it’s got everything in it I love.”

When Sarah started Erasmus Apparel in 2012, she was 25 and recently returned from Southern Alberta Institute of Technology, where she’d studied graphic design; she’d tried film school in Vancouver before that as well as a stab at fine art at the Alberta College of Art and design, but neither film nor arts students were up her alley.

In the beginning she used a room in her parent’s house in Ndilo as her design studio, outsourced the printing and sold the shirts out of her car at Aboriginal Day and Folk on the Rock.

“It’s one of those things, you dive into it or do it here and there. It was now or never, so we did it.”

The designs were well-received and soon she and her business partners, her aunt and uncle, relocated to a garage in Kam Lake and then to the company’s present location on Franklin. Today she prints in-house and has a team of five employees and says she has plans to expand to a new location in the next six months.

What are your early memories of growing up in Yellowknife?

I remember biking down to my cousin Skyler’s house, or going down to my granny’s. Going to the park. I remember playing on the rocks, that’s what Skyler and I did 24/7 or else trying to play with my older brother, though he would never play with us. We’d build forts and go rock-climbing with rope, the crappiest rope ever, I still don’t know how we’re alive for the things we’d do.

It’s definitely a unique character all of us have here. It takes a unique kind of person to live here, but everyone that does, loves it. They’re here for a reason, because they want to be and there’s the sense of adventure. And you’ve got to be creative living here, in -40, when you’re stuck inside. But it doesn’t keep us inside, we go out, we go ice-fishing, dog-sledding, skidooing. There’s definitely a sense of adventure living here.

It’s so far! Edmonton is like 18 hours away. That’s probably the one thing I’d change. But I’m used to it so it doesn’t bother me. And really, I like that it’s isolated. If it was too big I wouldn’t like it. I’m not a city girl. I liked living in Vancouver and Calgary at the time, definitely loved it, and everyone that grows up in Yellowknife needs to get away and get out for a few years. I certainly did. I said ‘I’m leaving and I’m never coming back.’ But as soon as you leave, you’re already planning your next trip back here. It’s just what happens.

What do you do to pass the winters?

I sit on the Folk on the Rocks board, so I do a lot of Folk stuff throughout the year with that. I still organize our adult soccer team – we’re the Coyotes –  or I hit trivia night at the Elks. I go to the different bands that come through town at the Top Knight. I do get out a lot too; I do try to leave Yellowknife, if not once a month at least once every two months. Go to Edmonton or Vancouver, somewhere so I don’t get cabin fever.

How do you spend the summers?

Summers are our craziest time, and I love to be here, so I don’t usually go anywhere. We’ve got a lot of tourists and the biggest thing is getting all of our stock ready and pumping it out. It’s summertime, right, so everyone is in and out, people need shirts all of a sudden. We have Folk on the Rocks, which is our biggest weekend of the year in terms of sales. When I’m not working, I like camping, going out on the boat fishing. I try to get outside as often as I can, that’s for sure.

The opportunities are huge here. The variety of stuff people do here is crazy. From just my buddies, there’s the film people, Dene A Journey, the stuff Artless Collective does, there’s the girls running FOXY, us, or little shops like Sarah’s Hot and Ready. If you have the commitment to make it work, the support from the community is huge; they want to see you succeed so they’ll support you.

Of course, it depends on what you’re doing. You got to make sure you do your research and there’s a market for it. If you do it right, it’s going to succeed. But there’s always that big risk that it’s not going to work out. When we started I didn’t know if anyone was going to buy a single shirt. I still don’t know if it’s going to be sustainable. We got to make sure we got the next hot item coming out, something different that people are going to like.

Are you Yellowknife lifer?

Probably. I definitely would want a house to go to on the ocean or somewhere warm. But I don’t see myself leaving anytime soon. It’s home, family’s here. Growing up with all my friends, friends are family, so I got a huge family here. I’d be lonely anywhere else. I miss my friends after two days. 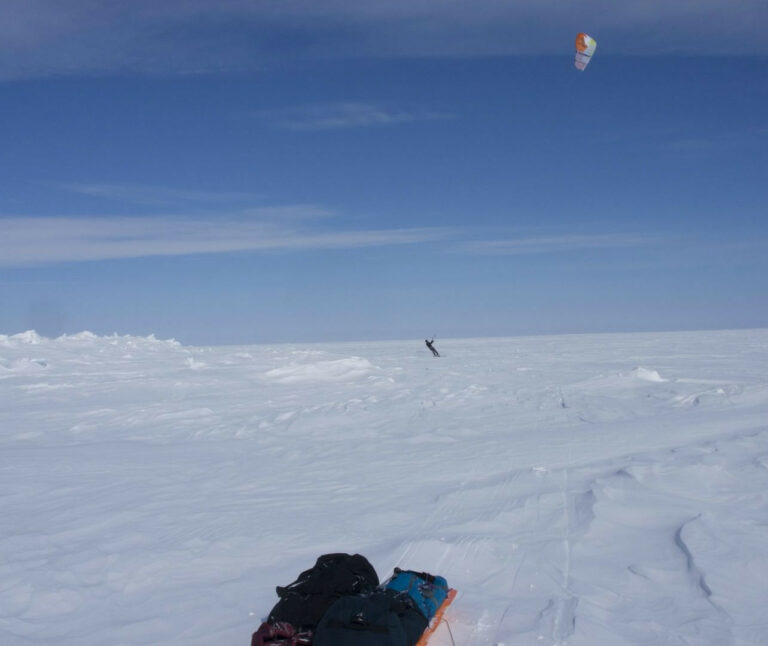 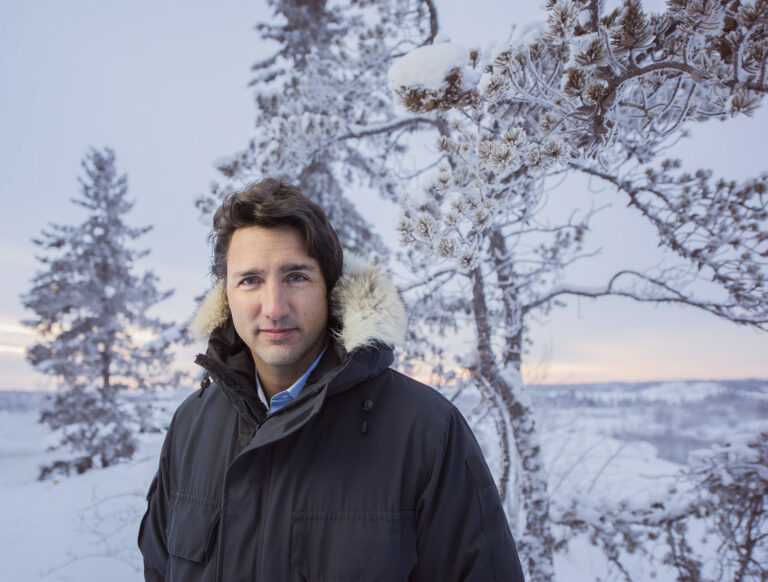