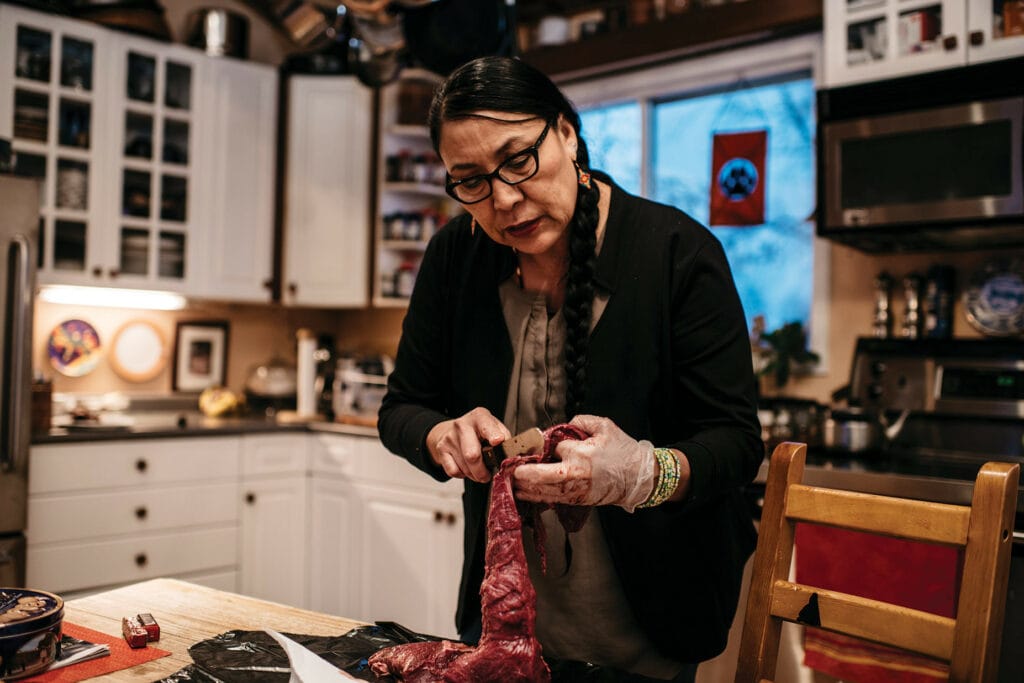 Born and raised in Lutselk’e,  former CBC North videographer and activist Snookie Catholique managed to keep her culinary traditions strong despite eight years in residential school. Today she works for the Dene Nation in Yellowknife and spends her free time cooking up whatever’s in season for her children and grandchildren. EDGE YK caught up with the Denesuline gourmand to see how the ongoing caribou hunting ban has impacted her food choices.

How important is country food to you?

I grew up eating country food and both my mother and father made sure that it was food that we’d always have and always enjoy. Even to this day it’s not very often that I would buy beef. Very rarely would I buy chicken, maybe once a year. I can’t remember the last time I bought pork chops and so that’s how much country food means to me.

What’s a favourite food memory from your childhood?

I remember when my father, when we were younger, we used to look forward to him getting us a muskox. He used to get one muskox a year. Very, very few families in the community did that. Now the muskox have come into the treeline but back then I just felt really privileged in the community because we were the only ones that were able to get this muskox meat. So to this day to me I really treasure muskox. And the same with the other little animals, like rabbits and we even ate squirrels. I can’t remember what it tastes like, but with rabbits, growing up I didn’t know that we were in training when we would help my grandmother make the rabbit snares. And then she would take us out, once, show us how to set it up and then we were on our own. Me and my brother.

How do you get your country food now?

One of my sons hunts. My family in Lutselk’e continues to hunt and fish so I get a lot of my stuff from there. And I’m really, really lucky to have the hunter friends that I have so I get a lot of meat that is shared by them. And then we have a hunter who works in my office that never fails to share whatever he’s gotten. So even though we do live in a [caribou-hunting] banned area I consider myself really lucky because I always have it, I’m never ever without.

Have you noticed since the caribou hunting ban that you have eaten less country food or different country food?

What I have noticed is that in comparison to when I was growing up, we had such an abundance of drymeat and people were willing to share and it was always there. But now I’m in a banned area so that seems to be a little harder to get now and those that do have it will only share it with those they want to share it with, or there is a cost attached to it. And the same with meat I find. It was unheard of to sell caribou meat. My father, that was one of his teachings to us, is that whatever we have we share so I’ve never ever sold anything in my life because of that. But I know here that people will sell caribou meat and whatever they have… fish, for a huge price. To me that’s wrong. Do you have a specialty dish that you like to prepare?

I totally enjoy just about everything. I can’t pinpoint one. You know when the ducks are in season, yes, they are on my plate and we eat it fresh. The duck eggs are fresh. Caribou meat, the choice parts we cook it over the fire, same with fish. The fish I’ll never keep. If it’s over a week old I try to give it away because I can get it so fresh from my community that there’s no need for me to store those.

I will make my own sausages because it’s less salt, healthwise. I continue to make my own drymeat although my mother is still alive and she’s very generous with her care packages. But we were all taught that, we knew how to cut meat, make drymeat and all that. Even my daughter knows how to make drymeat now. She’s in her 20s. It’s a skill I find that’s not passed on. In my time, even though I spent all those years in residential school, it was still something we had to learn. My dad made sure that we were able to survive and we kept our language and our love of country food was there. Survival skills and all that.

Do you think you could ever go without country food?

I tried to become a vegetarian and I had the worst-ever headaches. Some southerner kind of talked me into it… “It’s going to be really good for you, your skin will change, you’ll have more energy,” all of that. I was training to bike to Hay River at that time and I thought I’ll try it and I had the worst incredible headaches ever, all day and night. I fried up some caribou meat, and just like that, [the headaches] gone! And that was the last of my vegetarian days. (Laughs)