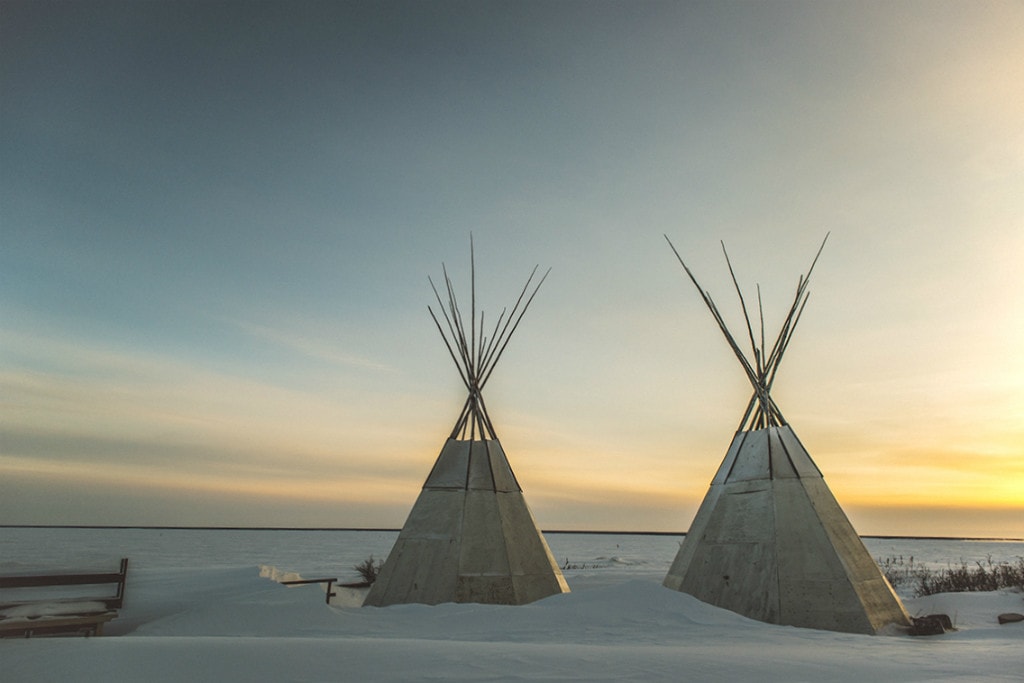 On the shores of Great Bear: Deline is the prophet's spiritual centre

“It feels like we are running out of time,” says Morris Neyelle.

The community leader, grandfather, photographer and historian from Deline is speaking calmly about the often gloomy predictions of his community’s legendary prophet and spiritual leader, Ehtseo (grandfather) Louis Ayah.

“When prophecies become fulfilled, the prophecies that Ayah had given to people, it feels like we are running out of time; like it’s getting smaller,” Neyelle says. “And he said these will come before the end is all happening.”

Prophet Ayah gave more than 30 prophecies to the people of Deline during his time on earth between 1857 and 1940. Originally helping missionaries to spread their teachings in ethics and religion to Dene in the Sahtu, Ayah grew to become a spiritual leader in his own right, and was widely revered as a visionary by the 1930s. People who had heard of his prophetic abilities traveled from across the Northwest Territories to hear him speak.

Neyelle has spent his life learning those prophecies from the elders who knew Ayah personally, and monitoring moments when the prophet’s followers believe one of his predictions has come true.

Because many of Ayah’s prophetic statements are vague and open-ended, especially those concerning the end of the world, they can be difficult to track, even for the elders, Neyelle says. But some are so specific that even skeptics have a hard time not being at least mildly fascinated.

Take his foretelling of the discovery of diamonds, for example.

“He was crossing the lake with an elder, who was a young man at that time, around March/April, crossing the lake with dog team,” Neyelle says. “It was warm, 24-hour sunlight you know, and halfway across the lake they made a little fire so the dog team could stretch their legs, and that’s when he told this guy to look east towards Yellowknife, Somba K’e.

“‘In the future,’ he said, ‘white men will come from the south, not in Yellowknife, but further up into the barren lands. They will find a rock and it will look like glass. Maybe three or four of them,’ he says. He meant the diamonds.”

Other such predictions have included the return of the caribou after a three-decade absence in the community, and the appearance of “three strange animals” that had never been seen in Deline before. In 2008, three polar bears would be spotted for the first time at Great Bear Lake. He also obliquely predicted the arrival of fossil fuels, saying the dinosaurs that once roamed the planet would “come back to play,” the decline of the Catholic church, and even reportedly named his exact day of death four years before it happened on Sept. 23, 1940.

‘In everything we do’

It’s these occurrences that keep the people of Deline transfixed on the words of Ayah, so much so that his spiritual guidance continues to be a key influence not only on the community’s beliefs and values, but on their political decision making as well.

“The things that he gave to the people, especially the Deline people, are happening,” Neyelle says. “So based on the prophecies, the community kind of worked together. It’s given to us already, and we already know what the future holds for us and the rest of the world. That’s why it’s so important here. Everything we do, the prophecies are always brought up.”

Ayah’s prophecies have so much influence in the community that they were used as the basis for Deline’s recently completed self-government negotiations with the territorial and federal governments. According to Neyelle, Ayah spoke about Deline one day becoming powerful and being given control over everything around them.

“So when we first started to negotiate self-government in ‘97, the elders said, ‘This is the one,’” Neyelle recalls. Since then, he said, the prophecy has been coming true, and will be fully actualized this September when the community gains control over its programming and services.

“It’s amazing how everything kind of fell in place. I was with that since the beginning in ‘97, with the self-government negotiations, and when we first started, Daniel Gaudet was our chief negotiator, I always told him: because it’s been foretold to us by the prophesies that everything will be given to us, it’s already there,” Neyelle says.

“So I kept telling him, no matter what the government is saying to us, don’t worry too much because we’ll get it. Just be patient because we will get it. And eventually we got it; everything we asked for. Because of that, we always worked together. That’s what Ayah always said to us, was to come together and you will get it.” But isn’t it a challenge to stay unified and optimistic when the bulk of Ayah’s predictions have to do with the end of the world? Storms, wars, famine, earthquakes — you name it; according to the prophet, the apocalypse is inevitable. Ayah’s visions match many other doomsday predictions from around the globe, but for the fact that all roads lead to Deline.

“Famine will be the very last, and will come from the east as well, and will take everything. He pulled out a blade of grass and said not even one blade of grass will stick out. Nothing will survive. Everything will dry up. There will be no food,” Neyelle says. “But people will come to Deline in the end. He put his fingers together tight and said that is how many boats will come fill up the lake. Maybe it’s for food, maybe for water, I’m not sure.”

In the end, the world will cease to exist in an instant, according to Ayah.

“He put his hands apart in front of himself and clapped, and said [the end of the world] will be faster than that; before you can hit your hands together,” Neyelle says. “But he also said, nobody knows when, not even himself. Only the Creator knows.”

While such prophecies are inherently fatalistic, Neyelle believes Ayah’s spiritual guidance has also left room for free will to delay such end times, should humanity choose to change the path it’s on.

“He says, the world will end one day in the future. He doesn’t know when, but if people don’t change from their sinful ways and it gets worse, it will end earlier than that date,” Neyelle says. “The life that’s been given to us, it’s how you live it; it’s up to you how you decide to live in this world. Nobody has the right to tell you what is right, what is wrong; you decide… We make choices in this world; that’s how I see it now.” So what is the next prophecy on the list expected to come true? Neyelle believes another gold discovery is forthcoming.

“That gold one that’s still missing, I see it will come soon. I can feel it, actually,” Neyelle says.

According to the prophecy, there is gold waiting to be discovered near Deline. Ayah said this is the same vein that has been explored near Yellowknife, and that it travels northwest below Great Bear Lake before emerging as a ridge behind Deline.

“That one, he said, will also be found, but it will found by an orphan — a person that doesn’t have a family — he’s the one that will find it, nobody else,” Neyelle says. “That one’s still missing. If he finds it and he uses it wisely for his people and all others, he will gain big time from it. But if he plays with it foolishly and uses it for useless things, it will taken away from him early.”

Case in point: according to locals, an outsider once attempted to discover the gold and claim it for himself. His life did not end happily.

“Back in 1970s, there was a white guy who came here. He got this contract for sewage and water hauling,” Neyelle says. “I guess he heard about this gold, so he went over there without telling the people and starting looking in the area where it was supposed to be. He dug holes here and there, and he stayed here for quite a while and tried to claim that whole area for himself. He also bought a plane. But before he could claim that area, that plane went down with him and he died. So the elders say, don’t play with it. You do it wrong, you pay for it.”

Living on a prayer

Ayah’s prophecies continue to attract visitors from across the North each summer during the community’s annual spiritual gathering in August.

People like Neyelle regularly visit Ayah’s grave and the shrines dedicated to the prophet around the community. They are praying for guidance, but also looking for a sign.

“After I’m gone, Ayah said, they will build a little fence around my grave. A lot of people will come from all over to visit my grave in the end, and the fence that they build around my grave, always watch it. When you move my fence around and it wobbles and is rotting and falling apart, then the end of time is very near. That’s how you will know it,” Neyelle says.

In the end, Neyelle says it doesn’t matter if everyone believes Ayah’s predictions; all people can do is try to live life in a good way.

“You don’t have to believe me; I’m just telling you what I know,” he says. “Hopefully it doesn’t happen for a long time, because then our kids still have a chance to get out of this world we’re creating.”