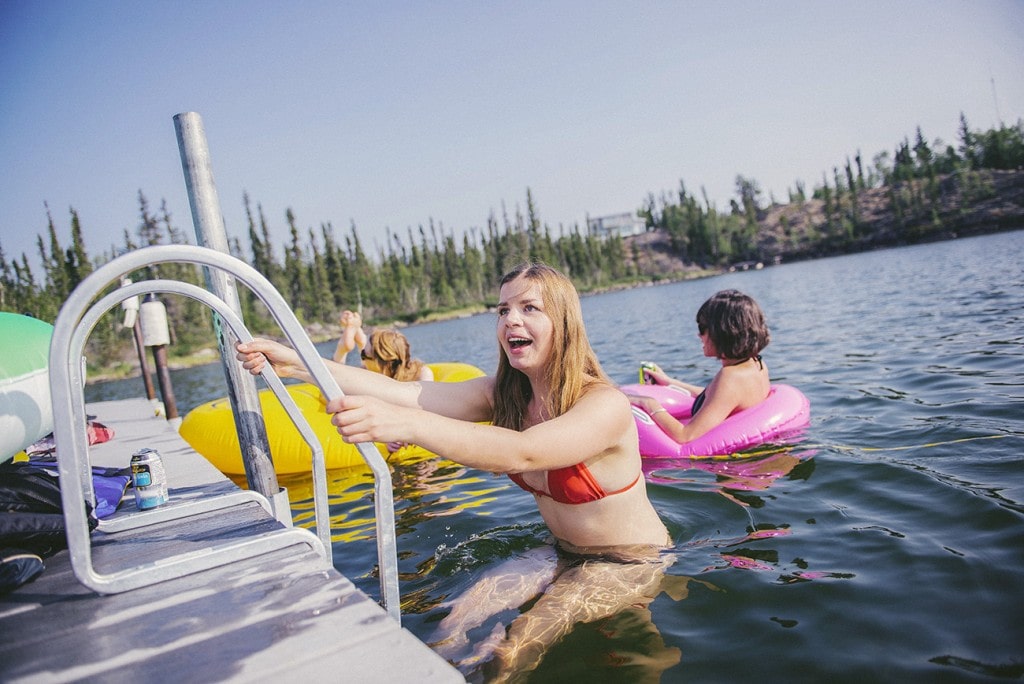 As I watch the sun set at 9:30 p.m., enveloping Fredericton in a thick, humid darkness, a single tear rolls down my cheek. Really? No, not really. But my heart does break a little, seeing that sun pack it in for the day so early.

It’s my first summer in the south after three in Yellowknife, and it’s been tougher than I thought it would be. I left the North for a new job, as Yellowknife was descending into the bitter cold months of winter.

Fifteen Maritime blizzards later, I was feeling a little stir crazy, and was comforted by everyone claiming the hot temperatures and sunny days were coming. I was ready for summer. And while the sun is shining (most days) and the temperature creeps higher and higher (along with the humidity), there’s something that’s not quite the same. Being absent for a Yellowknife winter didn’t bother me so much — even with its aurora chasing, cabin nights, snowmobiling and stomping Sorels on the Gold Range dance floor. But the summer is a whole different beast.

As the days got longer in the North, the pictures and statuses trickling into my computer via social media shook off the Canada Goose jackets, frosted eyelashes and Environment Canada updates. In came images of campfires along the Ingraham Trail, brunches on the Wildcat patio, sunglasses at 11 p.m. Phone calls and Skype dates with friends replayed the past few summers in my mind: and while it might seem like the same ol’ YK for them, for me, it sounded oh so sweet.

Nothing really prepared me to feel the way I did: missing Yellowknife. Not really the town itself – and the people I will always miss – but the summer and everything it means and everything it does to you. I miss being hatefully energized at 6 a.m. as the light beams through the edges of my curtains, and conversely, forcing myself into sleep under the sun’s constant companionship.

I miss walking out of work at 5 p.m., and it feels like noon. I miss thinking that the day is over, only then getting a text from a friend at 10 p.m. that everyone is going to the cliffs on Long Lake, or roasting whitefish and drinking beer along the Yellowknife River. I miss the dirt-coated feet from Folk on the Rocks, the welcoming breeze as I run the Old Town Loop, two-stepping at the Range, watching the floatplanes soar off the bay, and the sweet smell of forest fires partnered with the hot pink sun.

You cram a hundred summers into one in Yellowknife. It’s completely manic – never sleeping, constantly on the go. You have no choice but to hang on for the ride. My solace as I head into my first southern summer, is that I know I will carry that Yellowknife summer lifestyle wherever I go. I’ll be the one pestering these southerners to go kayaking along the St. John River on a Tuesday night, venturing along the hiking trails in this province, or road-tripping to Maine or Prince Edward Island on a whim. I won’t be satisfied with standing still.

Yellowknife summers take you out of your comfort zone, and teach you to take advantage of the opportunities you come across. You know to take that endless energy that injects you as the days get longer, and make the summer the best it can be. That’s what I have learned from my summers in Yellowknife – to take chances, to try new things, and to always tell yourself you can sleep in September.

Katherine Hudson landed in Yellowknife in February 2011, laughing out loud when the pilot said it was -37 C. She left last November after almost three years North of 60 working as a reporter and editor. Katherine is now the editor of Here, an arts and culture weekly magazine in New Brunswick.