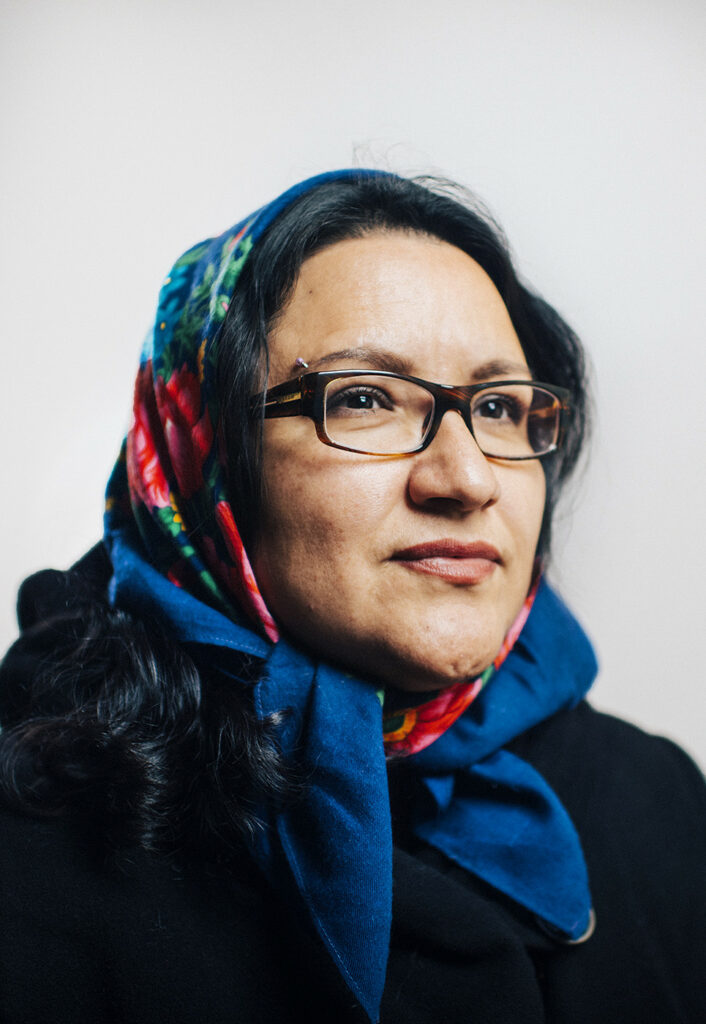 Leah Mandeville is bringing the hankie back: "I would love for it to be a movement."

For Leah Mandeville, much of the happiness of her childhood growing up in Fort Resolution can be tied up into one symbol: her grandmother’s handkerchief.

“It’s nostalgic. It brings me back to how things used to be, to the innocence of it all,” she says. “You know the feeling. It’s always a pleasure to see your grandma. You feel that kindness and warmth and pure love.”

Leah’s grandmother, Albina Mandeville, wore a hankie on her head or around her neck every day, her granddaughter says. Born in 1915 in Fort Providence, Albina would move to Fort Resolution after marrying Victor Mandeville and have 15 children and many more grandchildren before passing away in 1998.

“Grandma had different coloured hankies,” Mandeville says. “Some were for church, some were for winter so they were thicker, some had flowers on them. All sorts of hankies.” Leah Mandeville with her grandmother Albina coming back from church in Fort Resolution in the late 1970s.

Mandeville says it brings her joy to see women Elders from the Dene communities sporting their headscarves, but can see the trend is fading as the older generation is lost.

“There used to be a lot of them, but now not as much. It’s something that if we don’t continue to do it, my generation or the next, it’s going to be lost,” she says.

Though only in her 40s — “I plan on living a long time” — Mandeville recently decided to take up wearing a hankie when she goes out around Yellowknife, where she now lives and works.

Not only does the act celebrate a time-honoured tradition; it serves a practical purpose, as well: “You don’t have to worry about your hair flying all over the place.”

Since announcing her commitment to bringing back the hankie, Mandeville says it has sparked interest among some of her friends on social media.

“Other people have said they have hankies from their grandmothers and that they want to start wearing them,” she says. “I would love for it to be a movement.”

Though she admits she wouldn’t have been so keen on donning a headscarf in her 20s, she has come to see the traditional hankie as stylish. But more so, she says, it’s about what it represents as an image from the past.

“In 15 years, it could be gone altogether and all we would have are photos and memories in our heads,” Mandeville says. “That would be really sad. So for me, it’s trying to hold onto something. Because we can. I can.”