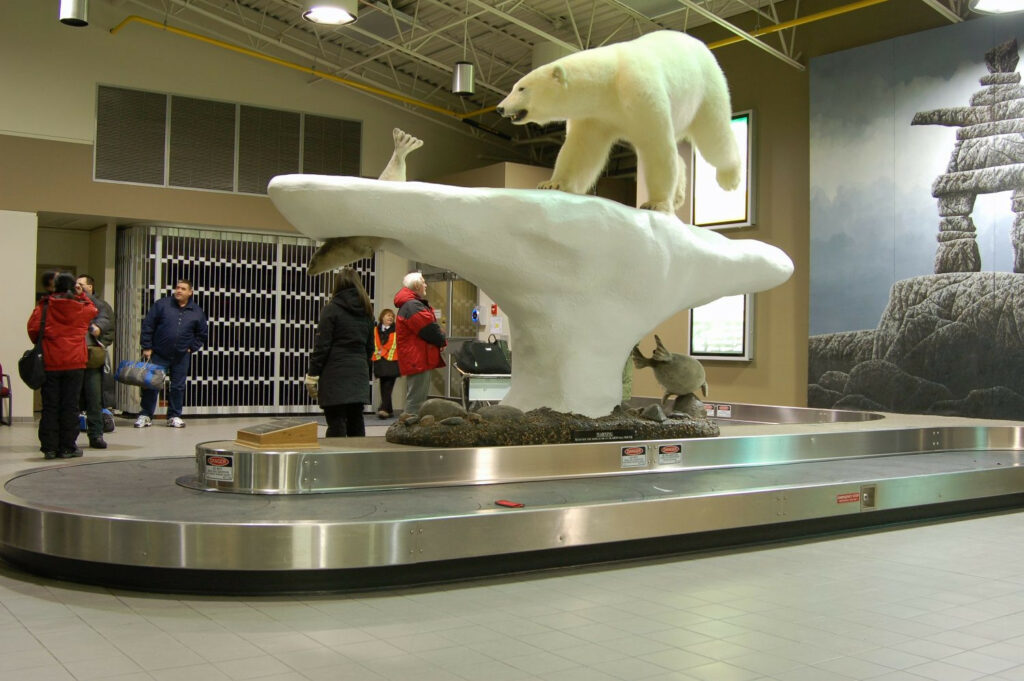 There’s no doubt that YZF is a poky little operation at the moment, compared to most Canadian airports. In its budget last June, the GNWT announced plans to whip it into shape “by bringing airport fees in line with those charged by comparable airports in the south and by introducing an airport improvement fee of $20 per passenger travelling south and $10 for those flying north. Once fully implemented, these changes will provide an estimated $10 million in new revenue annually,” as opposed to the $3 million annual deficit it is currently running.

Sounds great, right? From fiscal black hole to profit centre in a few easy steps. And there’s nothing wrong, in the wider scheme of things, with making YZF a more business-focused operation, as is the case with the majority of Canadian airports since the early 1990s. A bigger, better airport — one able to handle long-haul flights direct from Asia, for instance — who doesn’t want that?

NWT air travellers are going to be squeezed for $13 million. Sure, that’s simplistic as hell, but it’s not far from the reality. And if that money is being used by an independent airport authority to create a snazzy new airport with Asia-friendly runways, it may well be worth it.

It’s a little inconvenient, though, to note that NWT taxpayers, those currently bearing the load of that $3-million deficit (which has since been upwardly revised to $4 million), are going to be shelling out the vast majority of that $10 million in new revenue — either directly, through the airport improvement tax, or indirectly, through the passing on of new landing and terminal costs from airlines to travellers.

Sure, some of those travellers will be tourists, and some will be southern conference attendees, but most will be residents: according to the Yellowknife Airport Governance Review, there are currently some 500,000 passengers passing through YZF annually. According to Industry, Tourism and Investment, there were 63,119 tourist visits to the city in 2014/15 (a number which includes those who got here via the highway).

In essence, NWT air travellers are going to be squeezed for $13 million. Sure, that’s simplistic as hell, but it’s not far from the reality. And if that money is being used by an independent airport authority to create a snazzy new airport with Asia-friendly runways, it may well be worth it. Let’s just avoid being disingenuous about who’s paying for it.

And let’s make sure the money actually gets spent on the airport.

Last week, in presentations made to city council and to the chamber of commerce by deputy minister of Transportation Russell Neudorf, the issue of cost of living was addressed somewhat. Those new airport improvement fees  — $20 southbound, $10 northbound — and the estimated passed-on costs from higher landing fees, etc. — around $9 a ticket — would result in an estimated 0.08 percent increase in the cost of living for the average NWT household, according to the deputy minister. Negligible, considering the potential positive effects on the economy. This move to make YZF a more business-focused operation — as most airports are these days — is nothing new, Neudorf pointed out, but something that’s been in the works at DOT for at least 12 years. “The catalyst that allowed us to move forward now is the current state of our government,” he told council, “and the need to do what it can to get its fiscal house in order.”

That’s a very honest statement by the deputy minister. And a red flag.

Is the fiscally-panicked GNWT really looking at all this YZF-monetizing as a path to a “financially self-sustaining model to enhance the traveler experience and act as a catalyst for promoting and enhancing business opportunities in the NWT”? Or is it looking at it as a way to help balance its books?

Much to the alarm of at least one city councilor, the GNWT is not, in fact, creating an independent airport authority model for YZF — one that hands over both operations and governance. This has been the recommendation for years — a handover to a fully independent authority, able to manage its own affairs and account for its revenues.

Instead, Neudorf explained, cabinet decided it would rather not go all the way to an airport authority. Instead, it would “take a small step first, before we get to an airport authority,” by putting the new revenue into a revolving fund, one that will still be in the control of the GNWT. And, as YK city councillor Adrian Bell noted in a recent post entitled How To Tell The Difference Between An Airport Improvement Fee And A Cash Grab, any “capital expenditures will apparently still have to be approved as part of the regular budget process.”

That’s a red flag, an ambulance siren, and a screaming infant all in one. Let’s take a stab at assuming that cabinet’s intentions are pure right now, and this is just a breather before the arrival of a full-fledged airport authority. That may very well be the case. But even with the best intentions, a cash-strapped government,with pitifully few real opportunities to generate real revenue as it heads toward that famous “fiscal cliff,” is going to have a very hard time keeping its hands off all that sparkly YZF revenue. From Bell: the airport “is guaranteed to become financially self-sustaining the very second the GNWT slaps an airport improvement fee on every ticket and triples landing fees. It’s not like northerners can just drive over the border to Bellingham to catch a cheaper flight. So to suggest that we need to experiment a bit before Cabinet will begin looking at options for handing over governance is disingenuous.”

From finance minister Robert C. McLeod’s June budget speech: “We propose to establish a revolving fund for the Yellowknife Airport so it can use the revenues it generates to improve services, invest in capital, promote business development and to better position the airport to be a key asset in helping grow and diversify our economy.” A fine statement, but one it is hard to believe in over the long-term, without a truly independent airport authority.

The airport governance review and Draft Business Plan for the Yellowknife Airport can be found here. Comments on the plan from the general public can be submitted via email at YZF_Evolution@gov.nt.ca, by October 15, 2016.